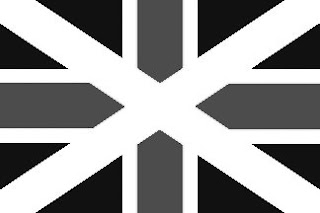 It was on this day in 1776 that the battle of Moore’s Creek Bridge was fought near Wilmington, North Carolina. Unfortunately a victory for the republican side, it was nonetheless a display of great courage and heroism on the part of the loyal royalists and, as far as I am aware, the last example of a traditional “highland charge” in North America. The Revolutionary War had still not taken hold completely in the southern colonies prior to the battle and the Royal Governor of North Caroline, Josiah Martin, was, like others, convinced that with only a modest force of Redcoats the loyalists of his colony could be rallied to the cause of King and Country, subdue the rebels and restore the place to loyal obedience; and not only North Carolina but the whole of the south. These expectations proved to be rather overly optimistic as when the two sides met at Widow Moore’s Creek bridge, it was the loyalists who were outnumbered by the equally hastily organized rebel militia by a few hundred men. Perhaps the most memorable thing about the battle, and what our focus today will be, was that the loyalist side was made up almost totally of Scottish highlanders and, it is noteworthy, a great many Jacobites.

After the glorious disaster known as the ‘45 Jacobite Uprising, many highland Scots had left the rather unpleasant atmosphere of Scotland for the New World and settled in the Piedmont area of North Carolina. Some today would probably not expect these men to have been likely sympathizers with the cause of King George III, however, not long after the troubles in America began, the Scotsman Allan Maclean obtained permission from the King to recruit loyal fellow Scots in North America to fight for the Crown in the Royal Highland Emigrants Regiment. Some of these men were long-time veterans of the British army but others had previously fought against it. For example, in North Carolina, to of the leading officers employed by Maclean in gathering Scotsman for the Royal Emigrants were Donald MacLeod and Donald MacDonald both of whom were veterans of the Battle of Bunker Hill. However, also recruiting for the cause of King George III was Allan MacDonald, a noted loyalist and the husband of the Jacobite heroine Flora MacDonald who had saved the life of “Bonnie Prince Charlie” and aided his escape to Skye. She supported the Crown as well and Allan MacDonald was appointed brigadier-general by the governor and rode himself across the colony from town house to country cabin urging people to take up arms for the King and in opposition to the rebels.

Those who responded had a variety of motivations. Aside from the pull of King and Country, there were local tensions to be considered. Since there settlement more and more people had started to move into the Piedmont area and these people tended to be of the Whig/Patriot persuasion and clashed with the more established residents of the area. Even those Scots not inclined to great adoration for King George III were often willing to fight for his side simply to stop the influx of colonists intruding on what had previously been their exclusive domain. For the Jacobites among them, there was also the memory that they had fought for something more than simply fidelity to the House of Stuart, as fervent as that was and as deeply felt as their personal loyalty to the “King across the water” had always been. Part of what was at the core of all of that was the idea that legitimate authority comes from God and so the idea of a democratic republic was unthinkable and downright wicked. King George III may not have been the monarch they would have most preferred, but better a Hanoverian king than a revolutionary republic and regardless of who was on the throne it was important that the ties between America and Britain (including Scotland) not be broken. 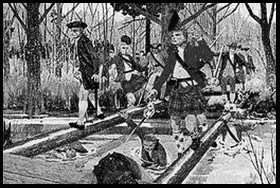 By 1776 Anglo-Scottish tensions had also eased considerably and it is a fact as well that even in the ‘45 at least as many Scots as supported Prince Charles just as fervently supported King George II. For many, it took the outbreak of republicanism in North America to reconcile the two sides in the common defense of the principle of monarchy. When they set out to confront the rebels they expected some assistance from Britain but the expedition intended to reinforce them was delayed by bad weather in Ireland and did not arrive. Neighboring Virginia had also known disaster was a hastily organized loyalist force with little support was overwhelmed by rebel forces and it was to be the same for North Carolina. Donald MacDonald, Donald McLeod and John Campbell led a little over 700 men into the fight at Widow Moore’s Creek where they were met by more than a thousand rebels. It was an awesome sight, coming on as they were in the ‘grand old style’ many in full highland dress and with bagpipes wailing away. At one point, Captain Campbell picked a group to charge across the bridge, which they did brandishing their claymores and shouting “King George and Broadswords!” only to be cut to pieces by withering rebel fire. 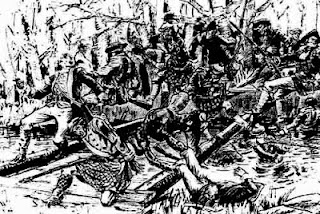 The aftermath was pretty bad for the cause of the Crown with loyalists being hunted down and taken prisoner or simply dispatched out of hand but, of course, it was only the beginning of the revolutionary war in the south and by no means the end. Today, however, I would suggest that monarchists take inspiration from those highland Scots who charged the rebel lines at Widow Moore’s Creek and the Jacobites in particular. Certainly it is an example of great bravery but from a somewhat unexpected quarter. Therefore it can also serve as something of a lesson for monarchists today, particularly those die-hard Jacobites who linger about the on-line world of theoretical monarchism. Far from sitting comfortably from a safe distance, pouring scorn on the existing authorities of the time, some of these men had actually suffered at the hands of Hanoverian troops, men who had shed blood and had their own blood shed in the cause of the House of Stuart and yet they put that past aside, never forgetting it and never ceasing to honor it, but in order to come together for the cause of kingship and traditional authority in opposition to revolutionary republicanism. That is an example that we would all do well to emulate.