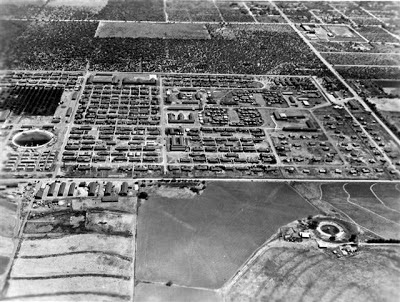 It was on this day in 1942 that the (thoroughly reprehensible) President of the United States, Franklin D. Roosevelt, signed the infamous Executive Order 9066 which authorized the forced internment of Japanese-Americans (as well as a lesser number of German and Italian-Americans) in concentration camps scattered in remote areas of the interior of the country. The one pictured above was not far from where yours truly lives. Today there is nothing left but an empty lot and a small marker but the memory of what happened to these people, most of whom were U.S.-born American citizens who had done nothing wrong, committed no crime and were never charged with any crime nor given any sort of trial or hearing or due process should remind everyone of the uncomfortable truth, especially those who would put the idea of the democratic republic up on a lofty pedestal, that "rights" are imaginary things which any government can suspend at their whim. I don't want anyone to think I am beating up on the United States by mentioning this as it is specifically because the USA has done better than most republics in the world that such gross injustice stands out all the more. Given the U.S. Constitution (to which so many pay lip-service) and the Bill of Rights, it is not unnatural that people expected better when it came to America. However, this is but one example of tyranny of the FDR administration which shows that the "rights" of the individual are seldom in so great a peril as when a leftist-socialist-progressive is in charge.

Some people, I know, get bent out of shape when I refer to these (officially "internment camps") as "concentration camps" as that tends to bring to mind what were actually "death camps" operated by the Nazis. Well, it's not my fault that the majority cannot be bothered to be correct in their language. There were no gas chambers, no massacres and no torture-experiments at these American concentration camps but they were not vacation resorts either. Given the background of those placed there, I cannot help but imagine how easily some of my own relatives might have been among them had they been in the wrong place at the wrong time. People were grabbed by military forces from their homes, sometimes with nothing more than the clothes on their backs and placed in these camps, surrounded by barbed wire and where stepping outside the fence got more than a few shot. They endured freezing cold, boiling heat and, perhaps most harshly, the bewildering ignorance of not knowing if or when they would ever be released. And, again, most of these were U.S.-born American citizens like anyone else, they just happened to belong to the wrong race or ethnic group so that, even without doing anything wrong or suspicious, their loyalty was called into question.

I have said it before and I will say it again, because the above is a perfect illustration of the fact, no matter how idealistic the political ideologue might be, true justice, freedom and security is not to be found in any piece of paper. No document, law or constitution can ever cover everything and even the one republic that has worked probably the best overall was still one where an injustice like this could happen. Democracy and elections are not a cure-all and choosing a head of state by popular majority does not ensure that tyranny and oppression cannot happen. I wonder how many of the Japanese, German and Italian-American sent to these concentration camps had voted for President Roosevelt?
Posted by MadMonarchist at 1:29 AM