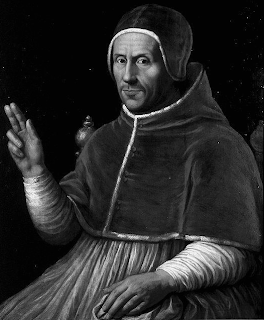 Few popes in history have had as many hardships to overcome as Pope Hadrian VI, a man remembered today mostly for being the last non-Italian to sit on the papal throne prior to the election of John Paul II. When his brief reign began in 1522 he inherited a myriad of problems. The Renaissance, with all of its learning, discoveries, grandeur, greed, ambition and worldliness was at its peak, and the Protestant revolt was going full force; his predecessor Leo X having been unable to fully appreciate the danger this rebellion represented -at least insofar as the Catholic Church was concerned. There was also the continuing rivalry between the two most prominent Catholic powers, King Francis I of France and the Holy Roman Emperor Charles V. Add to this the ethnic bias against him by many of the Roman elites (and no, the concept of nationalism was not invented in the 19th Century) and you can begin to imagine what a task awaited Hadrian VI on the Papal Throne.

A native of Utrecht, in the Netherlands, (and he remains the only Dutch pontiff to date) born on March 2, 1459 as Adrian Florensz Dedal, he was the son of a carpenter (promising for an aspiring Vicar of Christ one would think) and had a distinguished career before his election to the Holy See. After joining the priesthood he served as Chancellor of Louvain University in Belgium, as an Inquisitor in Spain (which toasted far fewer heretics than is popularly believed), regent for the Kingdom of Aragon, tutor to the future king of Spain (and Holy Roman Emperor) Charles V (for whom he was acting as regent) as well as becoming a cardinal before his election on January 9, 1522 as the “Successor of the Prince of the Apostles”. He was 62 years old, experienced, well-rounded and seemed a wise choice, even if an unusual one considering the predominance of the Italians in the Sacred College.

Obviously, the French were none to happy with the choice of Hadrian VI, whom they feared would be biased toward them and favor his former pupil the Emperor. And, they were not the only ones. In fact, the new pope himself was far from overjoyed upon hearing the news, saying he had "many reasons to be saddened". Indeed, when many Romans learned of his election they were outraged that a "northern barbarian" would be coming to rule the Eternal City. Yet, Pope Hadrian VI was to win more than a few enemies during this rather debased period of history for his simple holiness and moral integrity. This was a time when such qualities could just as often be a detriment as a benefit to a religious leader. Showing typical Dutch frugality and pragmatism, as soon as he arrived in Rome he cut back the lavish papal ceremonies and elaborate celebrations which cost so much money. That caused grumbling, but Hadrian VI also cut favors, and that could be downright dangerous.

Many came to admire him for his austerity, frugality and opposition to any form of corruption. However, others were inflamed against him by those elites who had lost their influence at the Papal court thanks to the reforming Dutchman. The all too frequent lapse into Church nepotism was immediately halted, Hadrian bluntly informing relatives who came seeking favors that, "he had not become pope in order to give away the property of the Church to his relatives". When confronted with anger from the Italian clergy over his cuts in spending Hadrian VI replied, "The pope is supposed to adorn churches with prelates, not prelates with churches."

Aside from this campaign of reform, with his history as an inquisitor, the Pope also made his primary focus the struggle against the Lutheran heresy spreading in Germany. He called on the princes to unite with the Emperor in opposition to anything which would divide Christendom, particularly in the face of the Muslim threat as the Turks had recently taken Belgrade. However, many of the princes had already embraced Lutheranism and the Pope's efforts were largely thwarted. He also uncovered a plot by the French to take the Kingdom of Naples, however, before the situation could be settled Pope Hadrian VI died in 1523 after barely two years on the Petrine throne. His reign had been short, and often unpopular, but in an age when many Church leaders were hardly upstanding examples, Hadrian VI left behind a legacy of personal virtue. He was a man of impeccable moral character, zealous devotion to the Church and upholding her doctrines as well as being one of too few who recognized that the Protestant movement was something to be taken seriously and was more than a minor dissatisfaction that would quickly fade away.
Posted by MadMonarchist at 8:13 AM