Sorry Girls, He's Off the Market 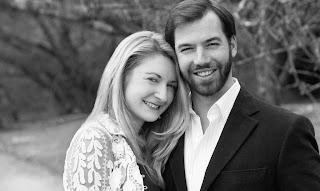 It was announced officially today that HRH Hereditary Grand Duke Guillaume of Luxembourg is engaged to 27-year old Countess Stephanie de Lannoy. The countess is a granddaughter of Princess Beatrice of Ligne and comes from one of the most old and esteemed noble families of Belgium. The couple have been dating for about a year or two and have known each other for about the last five years. So, now we have another royal wedding to look forward to. Our congratulations goes out to the happy couple and our condolences to all the young ladies around the world whose hearts are breaking today. The countess is fluent in French, Dutch, German and Russian, having studied Russian literature in Moscow. She is a classic movie fan and loves the violin and piano. The couple seem very happy together and, for a change, we will actually be seeing a marriage between two people that would not have been out of place in the days when noble and royal rank were considered important. Good for them!
Posted by MadMonarchist at 10:03 AM