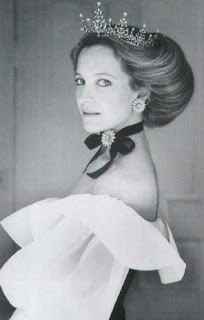 HRH Princess Michael of Kent is surely one of the more controversial members of the modern British Royal Family, and one of my favorites for all of that. Whereas most of the “controversial” members of the family attain that distinction for behavior which, for lack of a better word, might be considered too “common”; the Princess of Kent won the distinction for behavior which is a bit too “royal” for these egalitarian times. She was born Baroness Marie Christine Anna Agnes Hedwig Ida von Reibnitz on January 15, 1945 in Karlsbad, Czechoslovakia (today the Czech Republic) to Baron Gunther Hubertus von Reibnitz (a German) and Countess (take a deep breath) Maria Anna Carolina Franziska Walpurga Bernadette Szapáry von Muraszombath, Szèchysziget und Szapár (a Hungarian). After World War II the couple divorced and her father moved to Portuguese East Africa while her mother took the children and moved to Australia where she opened a beauty salon. As she grew up Baroness Marie Christine was often back in Europe and very cognizant of the fact that through the long ancestries of her parents she is related to virtually every royal house in Christendom. 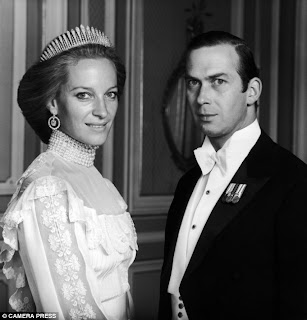 While in Germany, hunting wild boar, she met an English banker named Thomas Troubridge; no one too special (when your claim to ‘fame’ is that your older brother is a baronet -you’re no one too special). In 1971 the two were married in London and in 1973 they separated. If it doesn’t work out, it doesn’t work out. It was not until 1977 that the two formally divorced and (for reasons not made public) the following year the Baroness was granted an annulment by the Roman Catholic Church. There was a perfectly good reason for the Baroness to finally want to get around to a formal divorce and annulment: she had met and fallen in love with her soul mate, and someone considerably more important than the kid-brother of a baronet. The lucky man in question was, of course, HRH Prince Michael of Kent, first cousin to HM Queen Elizabeth II of the United Kingdom and etc. The very tall Austro-Hungarian aristocrat and the dashing British sailor made quite a handsome couple and they were married, the first time, in a civil ceremony in Vienna, Austria on June 30, 1978. The Baroness then became known to one and all as HRH Princess Michael of Kent, being a royal princess by marriage rather than by birth. On June 29, 1983, with the special permission of the Roman Pontiff, the two had a religious wedding ceremony in London. Because of his marriage to a Roman Catholic, according to the 1701 Act of Settlement, Prince Michael of Kent lost his place in the line of succession to the British throne (not that he was very high on the list anyway). 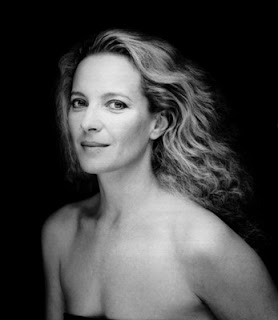 By that time the Prince and Princess of Kent already had a family. In 1979 the Princess gave birth to their first child, Lord Frederick Windsor, and in 1981 to their daughter Lady Gabriella Windsor. Aside from the usual raised eyebrows about her religion, Princess Michael soon began attracting controversy or at least reported controversy by those in the media business who stand to gain from controversy. Some of it was over their income and their residence and the sort of stuff typical on a slow news day in the tabloids. However, more was to be made of the character and attitude of Princess Michael. It was, for instance, reported (and I stress “reported”) that HM the Queen said Princess Michael was “a bit too grand” as part of a trend the media began to follow portraying the princess as arrogant and elitist. In the first place there is no proof the Queen ever said such a thing and, in the second place, there must be more people besides myself who want royals to be a bit “grand”. I would rather that they behave “a bit too grand” than to behave common. However, this was the line of attack the media would use against Princess Michael for a long time. 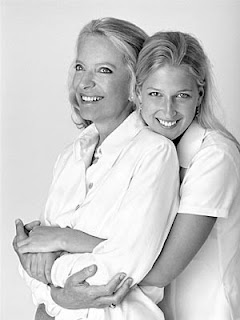 It did not help that she (reportedly again) did not get along well with the much beloved Diana, Princess of Wales. One report, in an effort to make her appear arrogant again, said that Princess Michael had stated that she had “more royal blood in her veins than any person to marry into the Royal Family since Prince Philip”. Again, there’s no proof she ever said such a thing but, that aside, when you look at the spouses of the Princess Royal, the Duke of York, the Prince of Wales and so on -it seems a perfectly factual statement. However, it seems that the root of the objections so many have about Princess Michael is that she is too “royalist” a royal for the modern tastes of many. She has been unashamed in her attachment to monarchy and her Roman Catholic faith, taking part in Catholic functions and authoring a number of books about royal figures. She has made no secret about her belief in the importance of ancestry and bloodlines and that “hereditary rank” is natural and beneficial. The Princess has also never shied away from controversial subjects or speaking her mind. When a media firestorm erupted after photos of Prince Harry were passed to the tabloids at a costume party wearing a Nazi uniform Halloween costume, Princess Michael said the liberal media would not have cared in the least if he had instead worn a communist uniform with a sickle and hammer. 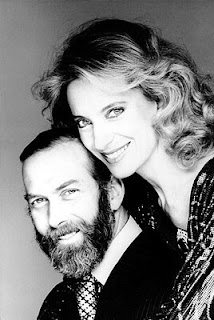 When increased pressure over their finances made things difficult for the Prince and Princess of Kent, the Princess returned to her previous occupation as an interior decorator to augment her work as an author, historian and lecturer. She is also President of the London gallery Partridge Fine Art and has worked as an art consultant. The Princess, along with her husband, have at times represented HM the Queen abroad at engagements she was unable to attend although they do not undertake “official” royal duties nor do they or have they ever received any money from Parliament or the Privy Purse. The Princess, like many members of the Royal Family, loves animals and is especially known for her love of horses, dogs, Siamese and Burmese cats. She is Patron of a number of charities devoted to wildlife preservation in Africa. She is also an avid gardener. Her work has earned her a good deal of recognition over the years, she was given the Order of the Starry Cross by HIH Archduchess Regina of Austria, she is a Grand Dame of the Order of Malta and in 2010 was given the Order of Mercy for her decades of unpaid charitable work.

Although she is considered a “controversial” figure, Princess Michael of Kent is one of my favorite royals in the world today. She makes no apologies for who she is, she is a royal who is staunchly royalist and interested in monarchy as well as the faith and the principles behind monarchy. I admire her for refusing to play the media game according to their own rules and for refusing to be intimidated into silence. At a time when many royals seem to want to be common or at least appear to, Princess Michael is proudly and unabashedly royal. The unfair criticism she has received at the hands of the media is something she has endured with dignity while maintaining her refreshingly honest attitude. She carries on, doing her duty when called upon and pursuing her own interests regardless of the opinion of the chattering classes. She’s one of a kind and good for her. Personally, I’d be happy with more like her.
Posted by MadMonarchist at 12:15 AM