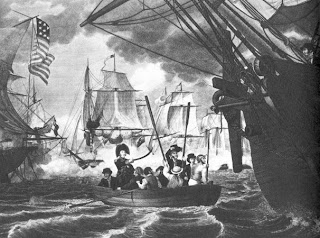 The final stage of the war was to be concerned with actions in two parts of the world: the American south and the city of Ghent in Belgium. It was in Belgium that representatives of the United States and the British Empire met to discuss the terms by which the war could be ended. Both sides were eager for an end, though it was certainly more critical for the Americans. Their grand ideas about conquering Canada had ended in inglorious failure and they were barely holding their own against British counterattacks. Britain, while safe from any outside threat, had just won a very long and costly war with the French Empire and the people at home were tired of death and the heavy war taxes needed to fund military operations.

The two sides began meeting in August of 1814. The terms Britain first presented called for the United States to cede border territories to Canada which the Crown forces now controlled and return the Northwest Territory to the Indians as had long been promised. The Americans balked at these terms but were saved when word of several US victories, especially the defeat of Prevost at Plattsburg, reached Belgium and the British decided to drop their demands. Instead, both nations were to return all territory taken by either side during the conflict with commissions set up to settle any disputes afterwards. Ironically, no mention at all was made about any of the issues over which the United States claimed to have gone to war in 1812 in the first place. With the defeat of Napoleon the aggressive blockade by the Royal Navy had become unnecessary quite apart from anything that happened in America. A treaty was signed on December 24, 1814 that was to go into effect when ratified by the governments involved. However, communications being what they were at the time, the war would enter one more year before hostilities ceased.

The man who was to see the conflict to the end in the United States was Colonel Andrew Jackson, also known as "Old Hickory" who had spent most of the previous year leading his ragtag group of Cherokee Indians, US regulars and Tennessee militia in a war against the Creek Indians for control of Alabama. The conflict had very little, if anything, to do with the war against Britain; but it was a convenient excuse to grab some more territory and eliminate Indians that could prove troublesome later to American settlers. Andrew Jackson was a tough, frontier veteran whose wartime exploits would later win him the Presidency. He once said that, "the only good Indian was a dead Indian" and his opinion of the British was little better. He carried a lifelong grudge against a British officer who had humiliated him as a boy during the Revolutionary War. Having already killed a small horde of Indians, as 1815 opened he now had his change to vent his hatred against the British as well.

The British fleet which had attacked Ft McHenry had regrouped and was now moving with a veteran invasion force toward the vital Mississippi and Gulf port of New Orleans, Louisiana. Jackson set to work with the ruthless efficiency that made him an effective commander. He distrusted the population of New Orleans and put the city under martial law for fear that they would submit to the British to spare themselves. He also put his southern militia to work digging earthworks for his riflemen and artillery. The upcoming fight had every indication of being a desperate battle. There was Jackson with a small force of around 5,000 ragged but tough riflemen and coming to attack him were more than 10,000 crack British troops commanded by Major General Sir Edward Packenham, brother-in-law to the famous Duke of Wellington who had defeated Napoleon at Waterloo. The British lines also included some Indian allies and Negro soldiers from the British West Indies. The Americans were also aided by the pirates of Jean Lafitte who had made a career of raiding mostly Spanish shipping while the US looked the other way.

Despite the uneven odds though the battle proved to be very one-sided in the Americans favor. Packenham ordered a frontal assault against Jackson with the British troops crowded close together, advancing over open ground. Thanks to a preemptive strike which delayed the British deployment, Jackson had time to set up his artillery in a good position to cover the field. His militia were armed with extremely accurate rifles and his frontiersmen were excellent marksmen. They were also protected by breastworks, some made of tightly packed cotton bales that proved quite effective. The battle commenced on January 8, 1815 and as soon as the British began to advance American artillery and rifle fire began to decimate their ranks. Packenham was mortally wounded early on and passed command to General John Lambert, urging him to press on with the attack. However, nothing seemed to go right for the British. Some troops were confused by the pirates of Lafitte who wore red shirts and the scaling ladders to be used to storm the American earthworks were never brought forward. The British advanced bravely, but could do nothing but stand in the open while the American riflemen picked them off.

Finally, disregarding Packenham's last order, General Lambert called off the attack and ordered his men to fall back. The British had suffered 2,036 total casualties compared to only 71 for Jackson and his men. The victory was celebrated across the United States and Jackson instantly became a national war hero because of the battle, even though it was fought after the peace terms had already been agreed upon. It was not until the very day of the battle however that anyone in North America was aware of this, and the treaty did not go into effect until it was ratified. New Orleans, however, was not actually the last battle of the war, though Colonel Jackson would probably have liked it to be. After retreating from Louisiana, General Lambert decided to take his still respectable invasion force and attack Mobile, Alabama. It was guarded by a recently reinforced garrison at Ft Bowyer. Jackson had earlier boasted that "ten thousand men cannot take it". However, General Lambert, with only a little over 1,000 men did exactly that, capturing the fort and the entire garrison of 370 men at a cost of only 25 total casualties. On February 17, 1815 President Madison officially ratified the Treaty of Ghent, officially ending the War of 1812. General Prevost was officially notified at Quebec on March 1.

To be concluded next week with Part VI, The Results of the War
Posted by MadMonarchist at 12:13 AM