The Problem with Churchill 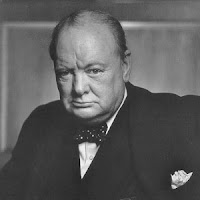 New member of the blogosphere (and longtime Mad Monarchist member) AB Royalist takes a critical look at the much celebrated Prime Minister Winston Churchill and his role in the downfall of the grand old British Empire. If you can stand a point of view sure to be controversial have a look at The Problem with Churchill Part I and Part II. Is it perhaps partly due to the near deification of Churchill by the much reviled "neoconservative" clan that more seem to be looking at Sir Winston in a different light these days? Those familiar only with the inspiring speeches of the days of the Blitz might be surprised to find out some of the less known facts about Mr. Churchill. Was he a visionary leader or a chronic blunderer? Have a read and decide for yourselves. I can imagine there will be some strong reactions to this.
Posted by MadMonarchist at 12:20 AM