The Order of Calatrava 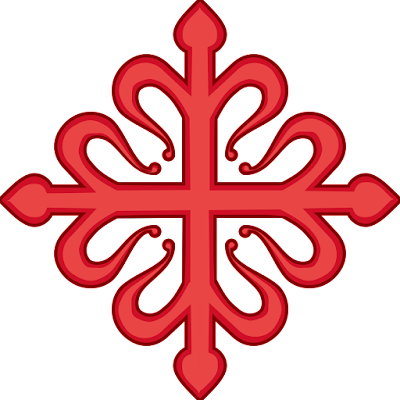 The Order of Calatrava is the most senior military-religious order of knighthood in the Kingdom of Spain, in fact, the most senior on the Iberian Peninsula, though it was second in terms of being given official sanction by the Roman Pontiff. It was founded in January of 1158 by St Raymond of Fitero (San Raimundo de Fitero) during the reign of King Sancho III of Castile. The fortress of Calatrava la Vieja had been retaken from the Muslims a few years earlier by Sancho III’s father, King Alfonso VII of Castile, and holding it was proving problematic. In those days of private, feudal armies, there was no permanent military force that could be counted on. St Raymond took up the challenge, knowing that there were a number of knights and the sons of knights associated with the recently formed Cistercian Order (a Catholic religious order also known as the “White Monks”) and so began establishing a permanent militia force associated with the order. This was the birth of the Order of Calatrava (sometimes also called the Order of Calatrava la Vieja and later, after moving, the Order of Calatrava la Nueva) which was to play a significant part in the on-going, centuries long struggle to retake the Iberian Peninsula from its Islamic conquerors.

Under their first Grand Master, known only as Don Garcia, the knights of the Order of Calatrava saw their first battles against the Moors. They received their confirmation from Pope Alexander III on September 26, 1164 with their final rule being approved in 1187 by Pope Gregory VIII. And, that rule was a rigorous one intended to instill great religious piety as well as martial discipline on all members of the order. There the basic vows of the Cistercians, a vow of silence in the refectory, dormitory and oratory, a certain number of prayers that had to be said every day, a certain number of fasts to be observed throughout the year, abstinence three days a week,  as well as additional disciplines such as the knights being required to sleep in their armor and so on. The purpose was to give them a secure grounding in the faith they were fighting to defend, the morals they were expected to uphold and to be ready for battle at any time in case of any emergency. Originally situated on the front lines, an area filled with danger which had been easy to take but difficult to hold, they were an elite force that was always prepared to act when and where they were needed.

This made for a magnificent fighting force indeed and in their first battles against the Arab and North African invaders, they proved themselves well worth their keep, winning decisive victories in engagement after engagement. In fact, they were so successful that the neighboring King of Aragon called on them for help in defending his own lands. Yet, this was a long and arduous war that was to know many setbacks as well as victories. The lands that were given as a reward for their many battles won soon became imperiled and divided due to a family dispute between the Castile and Leon branches of the Royal House of Ivrea. Then came the greatest disaster which was a renewed, fierce Muslim invasion by the Almohads of Morocco. The Almohad Caliphate overthrew and supplanted the previous Almoravid dynasty and by 1172 came to rule all of the Islamic areas of the Iberian Peninsula with fundamentalist zeal. At the Battle of Alarcos in 1195 the fortress of Calatrava fell to the Almohads and the order was almost wiped out completely. Those living in the Kingdom of Aragon tried to take charge and set up their own Grand Master but this was objected to by the remnant in Castile so that, while the Castilian knights of Calatrava sheltered and reformed in the Cistercian monasteries where they took refuge, the leader of the knights in Aragon, while not permitted to be Grand Master, was elevated to the status of Grand Commander for Aragon.

In Castile, the knights finally began to replenish themselves somewhat and took up residence in Salvatierra Castle, thus being known for a time as the Knights of Salvatierra, but this fortress too fell to the Almohads in 1209. The seriousness of the situation prompted Pope Innocent III to call on the whole of Christendom to rush to the aid of their fellow Christians in Spain and in 1212 the castle of Calatrava itself was (again) retaken and restored to the Grand Master of the order.  After the victorious Battle of Las Navas de Tolosa, the tide began to turn and the Muslim forces were pushed back farther and farther. Within a span of three years the order moved their headquarters to Calatrava la Nueva and took into their ranks the members of the Order of Monfrague (founded in 1196 by the Order of Mountjoy knights who had refused to merge with the Knights Templar). This was the start of a period of success and triumph for the Christian forces and the Order of Calatrava oversaw the establishment of new orders of knighthood which would later be famous in their own right such as the Order of Alcantara in Leon and the Order of Avis in Portugal. It was the high point of chivalric Spanish knighthood and culminated with the capture of Cordova in 1235 by King St Ferdinand, Cordova having previously been the capital of the Islamic caliphate.

When other important cities, including Seville, were retaken, King Alfonso X of Castile was feeling so triumphant that he began to plan for a campaign eastward to restore the Latin Kingdom of Jerusalem with his Spanish knights. The Order of Calatrava was respected, militarily powerful, largely independent of the local government and quite wealthy with extensive lands of its own. However, these strengths also made them a prize to be fought over and in 1296 an internal dispute broke out with two rival Grand Masters fighting for leadership of the order. By the early years of the Fourteenth Century it became noticeable that the zeal and piety of the early knights had been dissipated by greed and ambition. Plots and intrigues started to be commonplace with rival leaders or factions allying with the secular powers in various power plays. This ultimately resulted in the Kings of Castile becoming ever more involved with the leadership of the order, ultimately forcing the election of the candidate of their choosing to be Grand Master. One was even set to marry Queen Isabella I of Castile until his death prevented it.

Things had clearly reached a low point when Pope Pius II allowed the Grand Master, Rodrigo Telles Giron, to make his bastard son his heir which left the order under the nominal leadership of an 8-year old child. He was, of course, acted for by guardians but while the order had become a rather extensive empire unto itself, it was also increasingly divided. When Portugal and Aragon fought over the succession to the throne of Castile, different factions within the Order of Calatrava took opposing sides. It was only in their twilight that their honor was fully restored and we saw a glimpse of what the knights used to be under the leadership of Lopez de Padilla who was a respected warrior who led the knights in the last campaign of the war against Granada. He did not live to see the final victory and he would be the last of the independent Grand Masters, but he had provided a last glimmer of light in an otherwise dark decline.

With the expulsion of the last Islamic stronghold in Spain, King Ferdinand of Aragon took control of the Order of Calatrava himself and this was approved by Pope Innocent VIII. By 1540 Pope Paul III removed the vow of celibacy for the knights, replacing it with a vow of conjugal fidelity which greatly changed the nature of the order which began to become increasingly less military-religious and more of an honorary and secular. With the 800-year “Reconquista” having ended in triumph, the knights had lost their original reason for existing. The vow of poverty was later removed by Pope Julius III and though King Philip IV, in 1652, charged with Spanish orders with defending the doctrine of the Immaculate Conception, it was clear that the military character of the order was a thing of the past. They became restricted to the aristocracy and upper class with the last thing close to military action being undertaken by them was a call for assistance in suppressing the 1640-50 Catalan rebellion during which time the Order of Calatrava did not participate directly, consisting mostly of wealthy, older men and not young warriors, the order funded the arming and outfitting of an army regiment, along with the other Spanish orders of knighthood, which thus became known as the “Regimen of the Orders”.

By the time the Spanish Habsburgs were replaced by the Spanish Bourbons, the Order of Calatrava had already largely become a money-making institution rather than a religious or military one. As such, the Bourbons made use of it for that purpose and when King Carlos III founded his own order of knighthood, he required the existing Spanish orders to cough up the money to pay for it. This loss of funds forced the Order of Calatrava to sell off many of its assets which ultimately meant that it was not even fit for service simply as a profitable enterprise anymore. What it did have left was confiscated by King Jose (Bonaparte) in 1808 but later restored by King Ferdinand VII. However, it was finally secularized officially in 1838 though, effectively, this had long been the case. Still, the Order of Calatrava does survive, usually grouped together with the Orders of Santiago, Alcantara and Montesa as “the Spanish orders” with all of their insignia often being seen grouped together. As with all of them, the Order of Calatrava is now a hereditary order with the King of Spain as Grand Master.
Posted by MadMonarchist at 1:09 PM