The Prospects for France 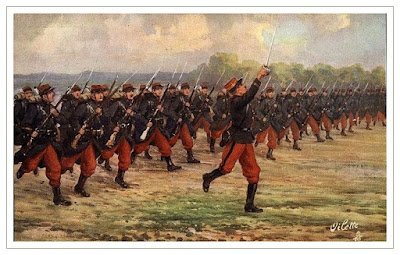 Today, the French citizenry voted in their first round of presidential elections and, as expected, the so-called "centrist" Emmanuel Macron finished in first place and the so-called "far-right" candidate Marine Le Pen coming in second. The two will next face each other in "round two" for the big prize of the presidency of the Fifth French Republic. At this point, obviously, nothing definitive has been decided. It is obvious that French voters are tired of "business as usual" and so have chosen two candidates from outside of the usual political parties who have held a monopoly on power in France, pretty much since after World War II. However, it is also obvious that the French public is extremely divided. Macron and Le Pen could hardly be more different. One is a nationalist who wants to put a halt on all further immigration to France, while the other is an internationalist who thinks borders are meaningless and nationality is a thing of the past. One wants to take France out of the European Union while the other used to work for the European Union and is firmly for staying. The upcoming "round two" election will be one of 'Marine Le Pen' versus the ruling global elite. 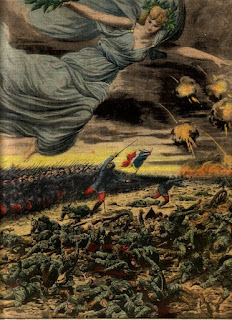 However, for being such seeming opposites, Macron and Le Pen do have at least a few similarities. Both are nominal Catholics but effectively secularists. The most that can be expected in differentiating the two on that point is that Le Pen seems less likely to attack the traditional faith of France outright but neither can be expected to defend it. They largely hold the same opinions on what Americans at least call the "social issues", both being basically pro-gay, pro-abortion and so on. They are also both skeptical of NATO with Le Pen talking of taking France out of the alliance and coming to an agreement with Russia while Macron would prefer to have European Union military force take over the job of defending the continent. So, Macron would not be such a great change on that front, for whereas Le Pen wants to leave NATO and the EU, Macron simply wants to replace the NATO flag for that of a militarized EU. This puts Le Pen firmly at odds with the trans-Atlantic internationalists. You can easily tell who the ruling class wants people to be afraid of by how they are described in the media. Le Pen, who wants France to be first and foremost for the French, is called the "far-right" candidate, while Macron, a former member of the Socialist Party who nonetheless claims to be neither left nor right, is called the "centrist" candidate.

We have also seen obvious efforts to tilt the scales in favor of Macron such as the last-minute closing of thousands of Le Pen supporters Facebook accounts (a "mistake" the company has claimed) and the sending of double ballots to French citizens abroad who are expected to vote for Macron rather than Le Pen. All of this along with a flood of negative media coverage that tries to portray Le Pen as little less than a Nazi and Macron as a stable, brilliant, boy-genius untainted by the political process. Neither have held elected office before but, of course, for Le Pen this is portrayed as a negative but for Macron it is a positive. Although it has faded somewhat since President Trump decided to lob a few missiles at Syria, there were also preliminary efforts to de-legitimize a potential Le Pen win by warning of Russian efforts to "interfere" in the election. Given that former U.S. President Obama voiced public support for Macron, I have no doubt the Russians would prefer a Le Pen victory but to say so would be "interference" and "undermining" the election. Obama showing support for Macron or his previous warning to Britain not to leave the EU is, of course, not seen as interfering at all. 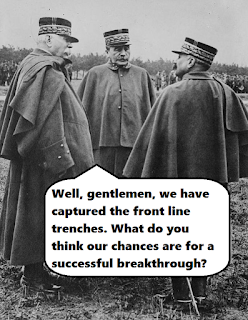 If the polls are to be believed, unfortunately in my view, this is working since they currently show Le Pen likely to lose by quite a large margin in the second round of voting. In truth, she was always a rather long shot, and this "populist" wave that has had the globalists in such a panic, has never been so sweeping as many would like to believe. "Brexit" was a win but not by a very wide margin. Austria was a loss, Italy was a win but it remains to be seen if anything will come of that. In the Netherlands, Wilders came close but ultimately the Dutch voted as their betters told them to and no one has ever expected Alternative for Germany to have any real electoral success. The victory of Donald Trump was what sent the globalists into hysterics in the first place and yet, lately, he has totally reversed course on most things that sent them calling for the smelling salts. No "Muslim ban", no trade war with China, no friendship with Russia and NATO went from being "obsolete" to essential with a single utterance. The point is that Le Pen has a very up-hill struggle ahead of her and those who want to keep France French will have to fight harder than they've ever fought before if they want to squeak out a win. All the odds are against it.

Of course, the odds were against St Joan of Arc too but, despite some very talented artwork, Marine Le Pen is no Joan of Arc, which is part of the problem. I do not want to discourage anyone, were I a French citizen I would be voting for Le Pen without hesitation, however, the best that can be hoped for from her is buying time or, to put it another way, stop things from becoming any worse. This is because, as I have said before (The Root of the Current French Crisis -please read it if you haven't already), only a repudiation of the French Revolution and all that goes with it can truly save France. After a traditional monarchy that lasted a thousand years, France has had five republics, none of which have lasted more than a century. Legitimate authority must cease to be subject to the public whim of the mob, the faith, values and culture of France must be embraced and defended, the sacred bloodline of French kings must be restored and to be French must be defined by blood rather than mere citizenship documents. This republican nonsense has been tried. My God, it's been tried *five times* and continues to fail! It does NOT work and it doesn't work because it is an unnatural contrivance built on silly, idealistic slogans and pandering to a mob that wants the impossible. At this point, most French people don't even know who they are or what their country is. 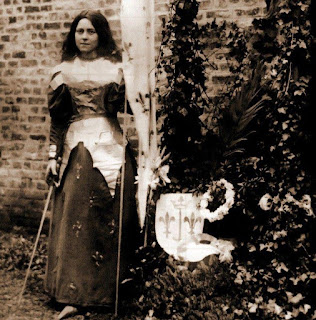 St Joan of Arc, an illiterate peasant girl, knew who she was and she knew what France was. She knew that France was for the French and not for the English. She knew that France had to have a king and who that king had to be. She knew that the true culture of France was a Christian, Frankish, Gallic culture and not an Islamic, Arab or African culture. The majority of the most highly educated people in France today are unable to grasp what that simple, uneducated peasant girl in the Middle Ages knew instinctively. This is what the Revolution has done to France. She knew that it was her duty to expel the invaders from her country and yet, she knew that it was even more fundamental to the survival of France to see the Dauphin, Charles VII, properly crowned King. Today, while I hope the French can recapture that "Spirit of the Marne" that prevailed in 1914, the invaders of today are not the Germans. The supporters of Le Pen are at least aware enough to know that they are being invaded, that they are being displaced, as a people and as a culture, yet as long as they remain bound to the republic and the legacy of the Revolution with all the accompanying "equality" and "brotherhood of man" idiocy, they will never be able to truly put a stop to this destructive cycle of one republican failure after another and the ultimate eradication of the French as a people, as a distinct nationality. That cannot be allowed to happen for the world would be a far darker place forever if it did.
Posted by MadMonarchist at 11:00 PM