French Royals and the Presidential Election

I mentioned it elsewhere, and thought I should here (while other things are in the works), what I know about the French royals regarding the current presidential election which has attracted international attention due to the very dramatic changes promised by one particular candidate. There are, as most monarchists know, several different rival claimants to the French throne, the only two serious ones being HRH Henri and Count of Paris and HRH Louis Alphonse, Duke of Anjou. There is also HIH Jean-Christophe, Prince Napoleon who is the head of the Bonaparte family but is, as far as I know, is attending school at Harvard. The one who most royal houses recognize as the would-be King of France is Henri, Count of Paris, who also gains more attention since he is French and lives in France. The Count of Paris has often made his political views known but this time said that he was not going to endorse a candidate and would have nothing to do with the whole nasty business. However, not long before the first round of elections, the Count of Paris overcame his aloof attitude and announced that he supported the conservative candidate of Les Republicains, Francois Fillon. The count said that Fillon was the only one who could straighten France out. As we know, Fillon did not win and has since called on his conservative supporters to back the leftist candidate Macron simply to oppose the dangerous "far-right" candidate Marine Le Pen. So far, the Count of Paris has not said whether or not he will do as his preferred candidate wishes and back Macron. It would certainly make news in a big way if he decided Le Pen wasn't so bad after all, it would be rather radical for the famously moderate Orleans branch of the French Royal House. 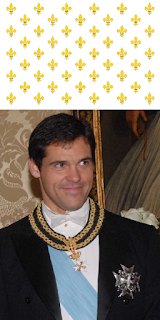 With the Count of Paris backing the failed Fillon, some have asked whether the legitimiste claimant to the French throne, the Duke of Anjou, had, perhaps, endorsed Marine Le Pen. The answer is, as far as I know, a resounding negative. I have not heard of the Duke of Anjou endorsing any candidate though I could certainly see many of his supporters also supporting the cause of Marine Le Pen. As far as I know, the Duke of Anjou has never endorsed a political candidate (though he may well have and I just never heard about it, I don't hear much about him and the last time I saw him in the news was a picture of him dancing with the former President's niece Lauren Bush). That is, perhaps, not that unusual since the Duke of Anjou is of the Spanish branch of the Bourbon dynasty, was born in Spain, married a Venezuelan and has never lived in France. After marrying, he and his wife lived in Venezuela but, not surprisingly, moved on from there as things went downhill and took up residence in the United States, where they had a little 'anchor baby' before moving back to the Prince's hometown of Madrid in the Kingdom of Spain. I cannot imagine that the current or former King of Spain would be too happy about the Duke of Anjou taking a side in the controversial French election as the Spanish royals have never been happy about him claiming the Crown of France at all and do not wish to be drawn into any royal-on-royal grudge matches. Just in case anyone is worried that a potential Le Pen presidency might see the Duke of Anjou prevented from entering the country, rest assured that, because of his paternal grandmother, the Duke is a French citizen (he is also related to the late Generalissimo Francisco Franco). In any event, failing to endorse a candidate may well be standard operating procedure for the Duke of Anjou.

The Bonaparte family has actually embraced republicanism and the father of the current head of the family, Prince Charles Bonaparte, has even tried his hand at politics on the local level though I don't know what, if any, affiliation he had with a major party. However, the House of Bonaparte did make the news in this election cycle as FN candidate Marine Le Pen stated that, if elected (and odds are she won't be), her administration would return the former French Emperor Napoleon III from his place of burial in exile in England back to the soil of France. Unless a major upset happens, however, it looks as though the second Emperor of the French will continue to take his eternal rest in the land of 'Perfidious Albion' rather than his own homeland.

One thing that I can and will say for certain is that I would prefer either the Count of Paris or the Duke of Anjou as King of France rather than the bureaucrat/banker Macron being President by a country mile. As far as I'm concerned, they could dig up poor old Louis Napoleon and name his corpse 'Emperor of the French' again and I would still prefer that to President Macron. At the very least, the sight of such a thing might at least frighten a few people into staying away from the country and the sight of the Bonaparte bones might get more French people to think about how much greater and more important on the world stage their country used to be and that might make them want to leave the EU or, oh, I don't know, at least more willing to simply survive.
Posted by MadMonarchist at 4:25 PM