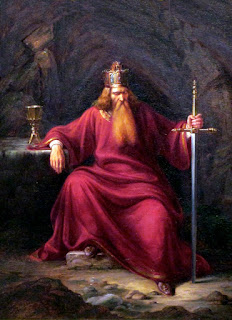 The German emperors tend to have a rocky history when it comes to Church-state relations, partly because, in their time, anything involving the popes were also state-state relations. For some reason I have yet to fully understand, some modern Catholics are willing to be more understanding regarding some emperors than others. So, Emperor Frederick I (Barbarossa), who found himself at odds with the pope is still reviled by many today while Emperor Charles V, who waged war against the pope, is celebrated. I hasten to add that this does not mean Charles V should be vilified, those who defend him are correct inasmuch as his problems with the pope were political and not religious, however, I am saying that one could be more consistent in applying such understanding in regards to the Hohenstaufen kaiser as one is with the Habsburg. The fact that it is not is, in my view, unfortunate and helps to further religious division, particularly for Germans, and that division has led only to widespread religious indifferentism. If, as any monarchist should, one wishes the German people to get back in touch with their monarchical roots, Frederick Barbarossa is a figure that cannot be ignored and should not be dismissed. He was one of the most important German emperors ever, I would say easily among the top three, and the Holy Roman Empire of the German Nation cannot be fully understood without him.

Did Emperor Frederick I have problems with the Church in his time? Most would say, "yes" but I would add that his problems were more with the papacy than with the Church as a whole. Problems there certainly were though and ultimately this stemmed from the fact that the First German Reich, referred to officially as the "Holy Roman Empire" had a very different beginning than the original Roman Empire which preceded it. It all came down to the fact that this new entity had begun with the Pope, St Leo III, crowning Charlemagne "Emperor of the Romans" and, as such, the papal view was that the imperial crown was theirs to give and theirs to take away. Emperor Frederick I, as with many of his fellow kaisers, needless to say, did not tend to share this view. There was also a territorial dispute which originated from, basically, the Pope giving land to the King of Sicily which Frederick regarded as being part of the empire without checking with the emperor first and after the Emperor had signed an agreement with a previous pope that promised there would be no such agreement between the Emperor and the King of Sicily without papal approval, so it seemed like a double-cross to the Germans. 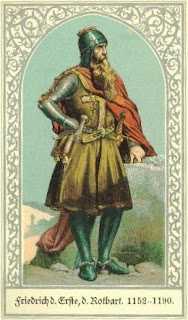 When Pope Alexander III was challenged by a rival in the person of anti-Pope Victor IV, the rather bad relations between Frederick and Alexander meant it was no great surprise that the Emperor recognized Victor IV as the rightful Bishop of Rome. Yet, even then, it seems to have been purely political as Emperor Frederick had first conveyed to Pope Alexander that if he would agree to see things his way, Frederick would remain with him but when the Pope refused, the Emperor sided with his rival. When Victor IV was succeeded by another anti-pope, Frederick supported him as well until he was defeated and driven from Rome by Alexander III. The Emperor mounted a last major invasion of Italy but met with a stunning defeat at the hands of the Italians at the Battle of Legnano. After this, Emperor Frederick I finally gave up on his ideas of empire, resigned to contenting himself with Germany and (this is important) formally and publicly patched things up with Pope Alexander III. So, yes, the Pope and the Emperor had their "issues" but, in the end, they kissed and made up. The dispute was always of a political nature and not really about doctrine or dogma.

Especially in these dishonest and disjointed times we live in, I think it is important to keep a few things in mind before being too hard on Emperor Frederick. He was one of the few German emperors to actually be crowned by the Pope (in 1155) with his troops killing off the Roman republicans who had been antagonizing the pontiff while he was there. Emperor Frederick, though he was excommunicated along with anti-Pope Victor IV, only had a problem with that because from his first day to his last he considered himself a staunch Roman Catholic and never considered being anything else. Indeed, he was widely considered a very devout and pious man who wanted the papal and imperial powers to work together but did insist that the pope recognize the imperial power which he wielded in secular matters. He was not some raving, unorthodox, heretic who was, for example, trying to argue that mothers could kill their children or that two men can get married. Finally, it is also worth remembering that even after all of his trials and difficulties, Emperor Frederick I died while going on Crusade to retake the Holy Land from Islam. In short, while not denying or covering up the very real differences Frederick Barbarossa had with the papacy, I think Catholics should not be too hard on him. The first view of him that comes to mind should not be that of a villain. 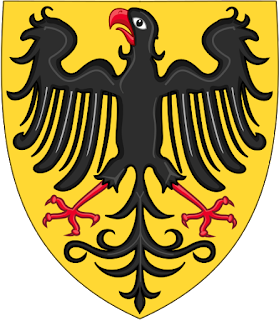 It is only my opinion, and I may well be wrong, but I cannot help but think that such attitudes probably played into the hands of someone Catholics should oppose much more; Martin Luther. I can imagine it being a great gift to him and his portrayal of the pope as a corrupt, Italian prince who lorded over the Germans that their most celebrated national heroes among the emperors tend to be the ones most condemned by the Catholic Church. In some cases, there were legitimate grounds for such condemnations with emperors who were clearly in need of some "correction" but I do not think Frederick Barbarossa was really one of them and I think some distinction should be made between those who had religious differences with the Church itself and those who had political disputes with the papacy at a time when, for good or ill, the pope was a political figure and acted as such. Again, Frederick Barbarossa was crowned emperor by the Pope, it was in his reign that the empire was first referred to as the "Holy" Roman Empire, he took his position as the secular leader of Christendom very seriously and died on crusade. I think Catholics should stop with the knee-jerk evaluation of him as an enemy to be immediately condemned at every opportunity.
Posted by MadMonarchist at 6:09 PM