The Siamese in the Great War 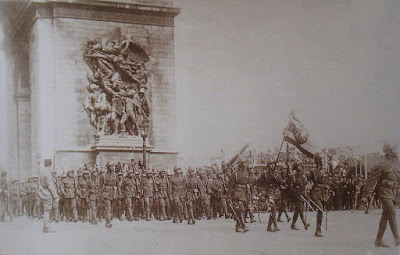 Most people, outside of the country itself, probably have no idea that the Kingdom of Siam (Thailand) was a participant in the First World War. This is not too surprising given that the Siamese contribution was necessarily limited but the southeast Asian kingdom was a member of the Allied nations and, unlike some who declared war simply as a symbolic gesture, Siam actually participated militarily. World War One brings to mind the trenches and cratered landscape of Belgium and France but it was a global affair and Southeast Asia was actually fairly well represented in the conflict. Forces from French Indochina (Vietnam, Cambodia & Laos) participated on the Salonika and Western Fronts for example, the British had a potentially dangerous mutiny by Muslim forces on their hands in Singapore (dealt with by the Japanese) and so on. The Kingdom of Siam, like many others frankly, had no real reason to get involved given that Germany, Austria-Hungary, Bulgaria or Turkey had done them no harm but it was considered that participation would bring real benefits to Siam both domestically and on the world stage.

The driving force behind the Siamese intervention was King Vajiravudh (Rama VI). This was when Siam was still an absolute monarchy but the King was not as all-powerful as he seemed from the outside. It was a time of great energy, hopes and aspirations for Siam and the King who was British-educated and who, after graduating from Sandhurst, was briefly an officer of the Durham Light Infantry in the British army. He thus had personal ties which made a totally dispassionate view of the First World War impossible. Which is not to say that he allowed personal attachments to cloud his judgment; far from it. He was very displeased with a recent treaty signed with the British which had seen Siam cede territory in the south to the British in what is now Malaysia. He valued his education and wished to see the same sort of education made available to his people but he was still annoyed at the unequal treaties Siam had made with numerous powers and the special privileges these allowed them, particularly France and, yes, Great Britain. He also faced internal threats to his authority and perhaps even the monarchy itself.

The collapse of the imperial system in China and the abdication of the Qing Dynasty in 1912 was a momentous event in world history that is generally not treated as such. However, it was positively earth-shattering and sent tremors all throughout east and southeast Asia, including Siam. A group of dissident army officers conspired to launch a military coup and abolish the monarchy, pledging to make Siam a constitutional democracy. Thankfully, word of the plan leaked to the authorities and they were arrested, tried and sentenced to death or life in prison. King Vajiravudh, however, wishing to appear strong and magnanimous, released all of them on the grounds that their intentions had been good in that they believed they were acting in the best interests of the country. Given what these men had said about the King personally, this had to be very difficult but for the King it underscored the need for greater national unity and to strengthen the monarchy. Many in Siam still had the mentality of the past when most of Siamese history was dominated by palace intrigue, family feuds and wars between rival city-states. King Vajiravudh wanted to usher in a new era of Siamese nationalism, place the kingdom on an equal footing with the other countries of the world and to bolster the power and prestige of the monarchy in the process.

The First World War was seized upon as an opportunity to do all of these things. The war itself was, of course, an absurdity that never should have happened and many still fail to grasp this, insisting that the problem was the wrong side won when the problem was that the war happened at all. However, the hopes of King Vajiravudh are at least understandable. By intervening in the war, he hoped to have a cause to rally his people around the monarchy and the First World War was the biggest cause going at the time. It would mean that the Kingdom of Siam was participating in the pivotal event in world affairs at the time and would give Siam leverage against its neighbors, the British and French colonial empires, to redress grievances in the future Siam had with both. Many in Siam were still annoyed, for example, that France had taken into its empire Laos and Cambodia which Siam regarded as vassal states of their kingdom. By intervening in a conflict which was an existential threat to Britain and France, particularly with no vital need to do so, Siam expected to gain greater moral authority in dealing with these two powers. Likewise, as the King issued the declaration of war in the summer of 1917, it could be expected that the war would not last for much longer anyway.

The King called upon all of his people to unite behind this cause, to take their place as a participant in world affairs and even adopted a new national flag using the red, white and blue colors of the major Allied nations. The three colors, as announced in Siam, were to represent a new national unity of 1 people, 1 faith and 1 king. As the Siamese Expeditionary Force was assembled, more people actually volunteered than could be accepted. As it was, Siam could, of course, only afford a relatively minor force of mostly support personnel with medical and transportation contingents as well as air forces though these would have to be trained by the French. The SEF, under the command of Major General Phraya Bhijai Janriddhi, landed at the port of Marseilles on July 30, 1918 about 1,300 strong. While the pilots and air crew were set off for their new training, the general observed the operations of the other Allies to gain some experience in how things worked and, not too surprisingly given the times, the first use of the Siamese was when a contingent was organized into a labor detachment.

By September, the Siamese forces started to be actively employed at the front with combat units being filtered into the line and the medical and transport personnel being engaged in the Meuse-Argonne Offensive. None of the air personnel finished their training in time to participate before the November armistice but those units on the ground who did see action acquitted themselves quite well. Their involvement was not extensive but they had been involved and earned their place in the victory parade in Paris when the war was over and a detachment participated in the Allied occupation of the Rhineland. Losses had been extremely light with only 19 casualties. The Kingdom of Siam was present for the Versailles peace negotiations, not that it mattered much, and was one of the founding members of the League of Nations (again, not that the League ultimately mattered much). The Siamese contribution to the war had been limited and only for the closing months of the conflict, was inexpensive in terms of lives lost and had earned Siam a place among the victors when it was over.

However, the overall results of Siamese participation in the Great War were somewhat mixed. At the outset, it seemed to have achieved all that the King had hoped. They had been a part of the great event of the time, were on the winning side, the prestige of the monarchy had gone up and there were some benefits to found. Siam got to keep the German ships they confiscated at the outset and within seven years the British, French and Americans had all given up their extraterritorial rights in Siam. However, in the long-term, these benefits could be seen as inconsequential or of limited duration. The ensuing economic collapse hit Siam hard and internal divisions, which the King had hoped to eliminate for good, soon reappeared and, to some extent, have become a mainstay of Thai politics. The financial crisis caused Siam to go into debt to the British which, in a way, could be seen as offsetting the new equality gained by Britain giving up her extraterritorial rights. All of this stress also benefited the dissident crowd and soon those advocating for a constitutional monarchy were back. King Vajiravudh would not live to see it but his successor, his younger brother King Prajadhipok, would go down in history as the last absolute monarch of Siam, the result of the Revolution of 1932 and the only king of Chakri dynasty to date to abdicate the throne.
Posted by MadMonarchist at 12:05 PM