The Eclipse of Empires at Sedan 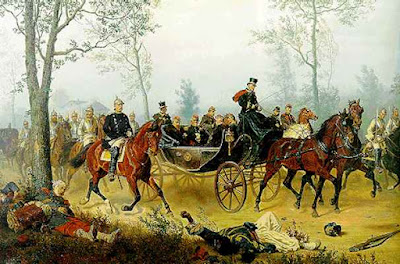 It was on this day in 1870 that the Battle of Sedan, between the forces of the French Emperor Napoleon III and the German forces led by the King of Prussia, ended in a decisive defeat for France. It was a day in history which saw one empire come to an end and another marching on to be born. For France, the battle would mark the end of their Second Empire while for Prussia and her allies it would mark the beginning of the Second German Reich. The French would not forget this humiliation and it would drive them to plunging headlong into the First World War in August of 1914, vowing to avenge Sedan and to recover Alsace-Lorraine, the provinces they would lose in the final peace agreement. For the Prussians, particularly Bismarck, it was the final step in his methodical plan to demonstrate that the Kingdom of Prussia had mastered her traditional rivals; Austria and France, showing the other German states that their fates would be bound to that of Prussia, making German unity a reality. Yes, quite a lot was determined by this two-day battle in the Ardennes.

For quite some time, the Kingdom of Prussia had been a power that could not be ignored but one which was considered no more than a regional power. The stunning victories of Frederick the Great were far in the past and while the battles against the first Napoleon were a proud memory and ones that had revived German nationalism, it was lost on no one that they had been won in cooperation with several other, stronger, allied nations. Furthermore, many discounted the military expertise of the Prussians, rightly judging their most famous commander, Bluecher, as a great leader but certainly no great strategist. They failed to take notice of the more brilliant but less inspiring staff officers of the Prussian army at that time. King Wilhelm I may not have been another Frederick but his most eminent subjects; Bismarck, Graf von Roon and Graf von Moltke made up for the difference. Although he does not always receive the recognition he deserves, Graf von Moltke was undoubtedly one of the greatest military geniuses the German people would ever produce. Their victory over the Austrians in 1866 had been so swift and so overwhelming that many attributed the outcome more to the deficiency of Austria than the strength of Prussia.

Nonetheless, the Prussians, with recent victories over Denmark and Austria behind them, definitely had the momentum going forward into 1870. The French Second Empire was, contrarily, certainly not at its best but still was subject to higher expectations. Not that long before, Napoleon III had seemed to have done the impossible. Not only had he brought about the restoration of the Bonaparte house to power and revived the Napoleonic French Empire but he had also managed to make a Bonaparte emperor acceptable to the crowned heads of Europe. He had ended the traditional antagonism between France and Britain, his armies won laurels for their hard fought victories against mighty Russia, secured control of southern Vietnam and made Cambodia a French protectorate. They won battles in China, Africa and, though it was a hard fought and bloody affair, had seen the Austrians removed from Lombardy. Armies around the world copied French fashions and while the royalists refused to accept him, he still managed to make even the Pope in Rome his dependent. It was a high point for French influence around the world.

However, the war against Austria in Italy had not been the total victory that was hoped for and both parties were left rather unsatisfied. The age old rivalry over the Italian peninsula would ultimately prevent either from the cooperation both could have benefited from in the face of the rising power of Prussia. A new effort at Franco-Austrian cooperation came when French armies succeeded in placing a Habsburg on the throne of Mexico, the first step in what Napoleon III envisioned as a new era of monarchical expansion in the Americas. However, while French troops dominated the battlefields, Mexico became a drain on resources, money and manpower with the republicans resorting to low-level banditry. When the American Civil War ended with the defeat of the Confederacy, the United States was able to send all necessary support to her republican lackeys south of the border and order the French to clear out. French prestige was lowered by this withdrawal at the command of another power and, particularly in light of the noble, tragic death of the Habsburg Emperor of Mexico, Napoleon III himself came out looking like a man who lacked commitment and whose word could not be relied upon.

Because of this downturn in French fortunes, it was all the easier for Bismarck, cunning character that he was, to provoke Louis Napoleon into instigating a war with Prussia. The French were not prepared, taking far too much for granted, while the Prussians were not. To use a not-so-technical term, France was basically curb-stomped by the Germans and the defeat at Sedan was the climax, though certainly not the end as France still had the ignominious end of the Paris Commune to look forward to. Neither army matched their traditional stereotype in this conflict. The French were slow, stuck rigidly to their plans and showed little initiative. The Germans, on the other hand, kept flexible, took risks and, as the old saying  goes, ‘marched toward the sound of the guns’. Napoleon III himself, rather like his famous uncle at Waterloo, was not at his best on this occasion. Whether the King of Prussia was or not hardly mattered, Graf von Moltke was and that is all that ultimately mattered.

At Sedan, by the second day, the French had been totally outmaneuvered and were trapped. The French Emperor, practically surrounded and outnumbered, ordered a succession of desperate attacks in an attempt to break out. None were successful and his army, which had hoped to relieve the siege of Metz, was itself finally forced to surrender. Napoleon handed over his army and his sword to King Wilhelm of Prussia and within only a couple of days the French Empire collapsed. Napoleon III would live out the rest of his life in exile while the Prussians went on to deal with the Paris Commune and then, at the Hall of Mirrors in Versailles, to have the assembled German princes proclaim the King of Prussia, “German Emperor”. All of this was a little too innovative for the very conservative Hohenzollern monarch, having an Austrian Kaiser and a German Kaiser seemed rather excessive and he refused to have “Sedan Day” made a national holiday in the new German Reich, though it was widely celebrated nonetheless, every year until the end of the First World War which was also the end of the Second Reich. All the same, Sedan had secured the unity of the German nation.

Monarchists played a major part in all of the events surrounding this momentous moment of European history. The war between France and Prussia was set off by the search for a new King of Spain after the overthrow in 1868 of Queen Isabella II who, having been unacceptable to the Carlists from birth, became unacceptable to the constitutional monarchists as well for being too conservative. Napoleon’s effort to find an ally to aid him against the Germans was also thwarted by monarchist opposition on two fronts, both regarding Italy as well as an at least perceived threat to the monarchy in Austria. The most important ally France could have had against Prussia was the Austrians. However, the Austrians were engaged in placating the Hungarians by implementing the “dualism” that would result in the Austrian Empire becoming Austria-Hungary which rather kept them busy. Austria also feared that if they became engaged in a war with Prussia, alongside France, the Italians might take advantage of the situation and go to war against them, so if Austria was to come on side, they wanted the Italians on side as well (where they could keep their eye on them).

However, this proved impossible for the same reason that Napoleon was unable to secure the new Kingdom of Italy as an ally against the Prussians. That reason, of course, was the presence of a French army in Rome propping up the rule of Pope Pius IX. While King Victor Emmanuel II was sympathetic to France, the Italians would have none of it so long as French troops remained on Italian soil and Napoleon dared not risk the wrath of the French royalists by withdrawing his army which was the only thing keeping the Pope in power in Rome. The result was that the French Empire was isolated with no other European power willing to take their side while Prussia, having already dealt with the Austrians, had the south German states ready to realign themselves to Berlin rather than Vienna.

Finally, there was also the issue of the royalists in France itself. Napoleon III had, throughout his reign, repeatedly taken action in the utterly futile cause of winning over the French royalists but, while many would fight for France, none would fight for him. Patrice de MacMahon, the commander of his army at Sedan, would fill the void left by Napoleon III with royalist support after suppressing the Paris Commune. The resulting national assembly had a monarchist majority, MacMahon was open to a restoration and the feuding French royalists had even managed to work out an acceptable compromise over who should take the throne. However, the designated heir, the Comte de Chambord, famously refused as he was told that the French tricolor would not be replaced with the Bourbon white as the national flag. That rather ended the discussion and while royalists thought that they could wait until the passing of Chambord for the next-in-line to the throne to bring about a restoration, Chambord lived longer than anyone expected and by the time he did go, the Third French Republic had taken root. The matter decided by the Battle of Sedan thus, ultimately, affected the House of Bourbon as well as the Houses of Bonaparte and Hohenzollern.
Posted by MadMonarchist at 5:55 PM