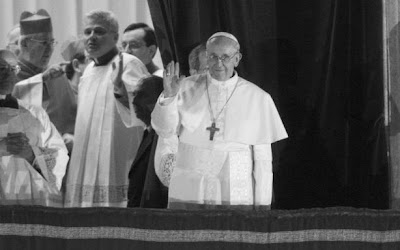 Jorge Mario Cardinal Bergoglio of Argentina has been elected Bishop of Rome, Sovereign Pontiff and has taken the name of Pope Francis I. 76-years old he is most noted for his humility, for riding the bus to work, for refusing to live in the bishop's palace in his own diocese so, I think it is safe to say we will not be seeing a restoration of the papal coronation given all of that. He is the first Latin American pontiff (though obviously of Italian ancestry), the first Jesuit to be elected pope and rather than taking the name of a past pontiff as is traditional, he chose the name "Francis", undoubtedly in reference to the humble St Francis. He led the crowd in prayer, prayer for Pope Emeritus Benedict XVI and to ask their prayers for himself before giving the apostolic blessing. Due to his age and imperfect health, his election was a bit of a surprise but with his past criticism of the Roman curia and his compassion for the poor, criticism of the gap between the rich and poor, many are taking his election as that of a reforming figure who will "clean out" the papal court and then pass the office on to a younger man. We will have to wait and see, there will be more to come in the days ahead but, a historic day on many fronts, Cardinal Jorge Mario Bergoglio, now Francis I, is the new Sovereign Pontiff.
Posted by MadMonarchist at 2:48 PM