Anniversary of a Tragedy 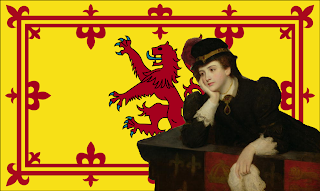 Today marks a tragic anniversary in the history of monarchy, at least in the western world. It was on this day, 424 years ago that Mary Queen of Scots was executed by order of her cousin Queen Elizabeth I of England, allegedly for involvement in plots against the English queen but, it is generally recognized today, the fundamental reason was that her own claim to the throne of England was a threat to Elizabeth I that she and her government were not willing to tolerate. She was, of course, not the first monarch or even the first Scottish monarch to be killed by a rival -sadly. Yet, the regicide of the Queen of Scots had very far-reaching effects. In fact, in some ways, the world we live in today, so generally hostile to the very concept of hereditary monarchy, was shaped by the regicide of Mary of Scots. The reason for this, why her death has such a special significance, is the manner of it.

For one monarch to be killed by another over a contested succession would have been nothing new. The Tudor dynasty in England began when King Richard III was killed at the battle of Bosworth Field in 1485 and his throne claimed by King Henry VII. However, what made the death of Queen Mary different was the veil of legality. The test of battle had long been accepted as a means of settling disputes, trusting that God would ensure that the righteous would prevail. It was quite another thing for one sovereign to undertake the death of another by means of the law. We are today so far removed from the sanctity with which the sovereign was once treated that it is hard for us to understand how significant this act was. Queen Elizabeth actually forced Mary Queen of Scots to answer to a court made up of Elizabeth’s own English subjects. A monarch, of much the same royal blood as their own Queen, was actually to be judged by the subjects of another. The verdict being a foregone conclusion, the sovereign of another independent kingdom was then to actually be put to death as a criminal.

This was shocking for the world at the time and sent waves of indignation all across Europe, particularly the Catholic royal courts. Religion certainly played a part in the whole affair. It was the English Catholics who most supported Mary of Scots as their own Queen, seeing Elizabeth I as illegitimate and thus it was the Protestants who most viewed her as an enemy. However, it is worth noting that, at the time, there was greater religious freedom in Scotland under the Catholic Queen Mary than in England under the Protestant Queen Elizabeth. To be fair though, such tolerance was the exception rather than the rule in those days and not viewed as the good, liberal ideal that it is today. Queen Mary (a devout Catholic) inherited a kingdom where Protestantism held most of the power and a policy of toleration for all was an effort on her part to avoid civil war (of course other reasons were found). In England, on the other hand, the Protestants were the base of power for Elizabeth I and one of the things they most expected in seeing her become their Queen was to get rid of the Catholics and restore the rule of the Protestant establishment. For Elizabeth to have shown toleration for Catholics would have been to alienate her staunchest supporters in favor of a group which did not view her as legitimate in the first place.

Given all of that, I would suggest that religion be put aside just for a moment in considering the ramifications of this tragedy. It cannot be put aside from the act itself for if the Queen of Scots had not been a Catholic she almost certainly would not have been executed; for that matter she may not have been forced out of Scotland and into the captivity of England in the first place. The evidence of the case against her can and has been endlessly debated, as has the religious aspects. In the same way people can argue whether or not the English were acting out of a justified strategy of defense or if the meddling in a Scottish civil war (which were far from uncommon) was more malicious. What cannot be debated was the unprecedented nature of the trial and execution of the Queen of Scots and the consequences this had for subsequent generations in Great Britain and to some extent the western world as a whole. Whether it was trial and regicide of King Louis XVI in the French Revolution or the trial and regicide of King Charles I in the English Civil War, both batches of regicides could look back to the case of Mary of Scots for precedent.

In the past, as stated, disputes between monarchs were decided on the battlefield. In some cases diplomacy was used and, before the rise of Protestantism at least, disputes between kings would be sent to Rome with both agreeing to submit to the judgment of the Pope; the only man on earth generally recognized by everyone as outranking a monarch. Taking the legitimate sovereign of a country to be judged in a court of law was something totally groundbreaking. Here was a monarch, someone of royal blood, not being judged by God, not by the Vicar of Christ or even by the nobility of her own country but being judged by a committee of noblemen who were the subjects of another queen. This was exacerbated by the fact that the Queen of Scots had come to England for refuge, had already been imprisoned for quite a few years and in the eyes of many her execution seemed unwarranted and vindictive, regardless of the evidence produced. She was already a prisoner, completely within the power of the English queen after all. Why on earth would one Queen strike a blow against the sacred nature of monarchy and royal blood by executing another Queen, her own cousin, who was already her prisoner?

If one can grasp just how outrageous this was considered by most of the crowned heads of Europe, it becomes a little more understandable that King Philip II of Spain launched his famous Armada against England the very next year. There were of course other and long standing reasons for the antagonism between England and Spain but it is nonetheless easy to view the regicide of the Queen of Scots as the last straw for Philip II, generally regarded as the Catholic royal champion of Europe in his day. That could have changed the course of history in a big way but, thanks to the weather and the English navy it did not have much of an impact. However, from the immediate reactions to it to the long-term consequences for the house of Stuart and the royal families of Scotland, England and France the regicide of Mary Queen of Scots set a very dangerous precedent indeed. This act sent a message that monarchs, even among themselves, could not take for granted their sacrosanct status and from that point on other peoples would look to royals, even their own, and say, ‘you can be judged’. 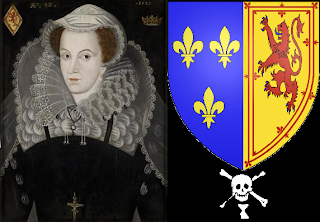 Posted by MadMonarchist at 12:37 AM