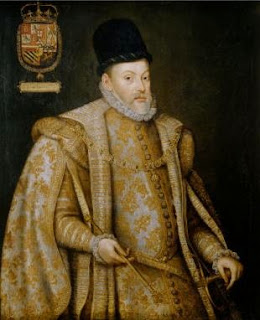 The House of Habsburg

King Felipe I: Felipe II of Spain claimed the throne as grandson of King Manuel I at the death of Henrique though it took a little longer (and an armed invasion) for the Portuguese government to accept him. He appointed a viceroy and let the Portuguese keep their own laws but the country was obliged to subordinate its own interests to those of Spain. A large part of the famous “Spanish Armada” that attacked England was Portuguese, for example. The worst part, however, was that the enemies of Spain now became the enemies of Portugal and it was open season on Portuguese ships and colonial outposts as far as England, France and the Netherlands were concerned. Felipe I was a good king but having him as king was not always good for Portugal.

King Felipe II: Felipe III of Spain was a very good man but not a very strong one. Factionalism became a big problem and Portugal was increasingly being stripped to fund the wars fought by Spain in Europe. He was a very diligent, very religious man but bad economic decisions, made because of emergencies in Europe and to aid the wider cause of the House of Habsburg, began to have disastrous consequences for Spain and Portugal. Peace was made with the Dutch but not long after Felipe II intervened to bolster the cause of the Habsburgs in Germany which was perfectly natural for him to do but which really could have only ill-effects for Portugal. He was personally a good guy but a somewhat “hands-off” ruler so that he tends to be criticized more than he deserves.

King Felipe III: Felipe IV of Spain was a little different as, while his two Spanish predecessors had not been terribly disliked in Portugal, Felipe III was. He was an able and energetic man and quite a good king for Spain all in all but Portugal was really hard hit by the enemies he made during this time. The English took Hormuz, the Dutch nabbed Ceylon, replaced Portugal in trade with Japan and seized a large part of northern Brazil. What was to become the Dutch East Indies was seized from Portugal in Southeast Asia. Some African holdings were lost though the losses in Brazil were eventually regained. This, combined with his efforts to make Portugal basically a Spanish province, caused the Portuguese to revolt, happily aided by other anti-Spanish powers.
Posted by MadMonarchist at 6:24 PM