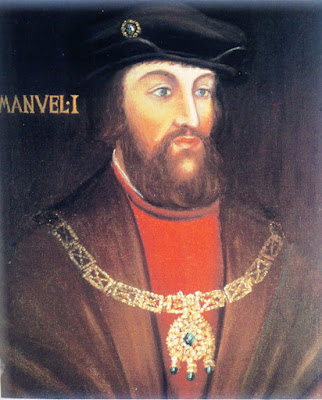 The House of Aviz

King João I: The illegitimate son of Pedro I, his seizure of power prevented Portugal being annexed by Castile in the wake of the chaos following the death of Fernando, the last of the original line of Portuguese kings. Grand Master of the Order of Aviz, he became King of Portugal and took the name of the Knights of Aviz for his own royal line. When French and Castilian troops invaded, King João and his English allies sent them packing. The Spanish withdrew and Portuguese independence was secured. He conquered Ceuta (in what is now Spain) from the Muslims in 1415, held it and told Prince Henry the Navigator to send ships to have a look around Africa. A successful monarch and renowned gentlemen, he set the scene for Portuguese greatness to follow.

King Duarte I: A veteran of his father’s conquests on the Iberian Peninsula and North Africa, Duarte I commissioned Henry the Navigator to make further explorations of the African coast, and did his best to rule by consensus, frequently consulting the Cortes. However, his attack on Tangier, Morocco, led by his brother Henry, was a disaster, the Portuguese ultimately being outnumbered more than 10-to-1. His brother Fernando was given up as a hostage but the Cortes refused to surrender the territory the Muslims demanded to secure his release. King Duarte I died, heartbroken, in 1438 at only 46. He left chaos in his wake but he shouldn’t be judged too harshly. He was a scholarly and thoughtful monarch who would have likely done better had he been given more time.

King Afonso V: Son of an ill-fated father and unpopular mother, Afonso was only 6 when he became King of Portugal but he eventually made quite a good job of it. After doing away with the regency and dealing with some rebellious elites, Afonso V went on campaign of conquest in Morocco. He supported the further exploration of the African coast while Prince Henry was alive but not after his death, being consumed by his battles in Morocco which earned him the nickname, “the African”. He was a warrior king who had little time for or interest in politics and administration, much preferring life in the field delivering the wrath of God upon the heathen hordes. He tried to gain the throne of Castile but found no joy, retiring to a monastery after. All in all, an impressive king.

King João II: Having earned his spurs on the battlefield as a young man, João II came to the throne determined to close the gap left by his father who had been a great warrior king but a largely absent administrator. He despised corruption and favoritism, centralized power, cracking down on the nobles who had gained power while the king had been away in Africa. João II picked experts to oversee affairs, greatly pushed exploration, finding new lands and new resources, putting Portugal on more solid financial ground than any other European power. He clashed with Castile over ownership of the newly discovered lands in America but was regarded even by them as a great man. He was far-sighted and fully deserving of his reputation as one of the best monarchs of his time.

King Manuel I: Coming to the throne in 1495, Manuel I continued the succession of great Portuguese monarchs. It is hard to separate him from the events of his reign as these were huge; Portugal discovered the sea route to India, Brazil was discovered and Portuguese superman Albuquerque seized the vital choke points giving Portugal control of all access to the Indian Ocean and a monopoly on trade with the Far East -epic win there. Manuel was an absolutist and very religious, spreading Christianity around the world and expelling all Jews who would not convert from the country. He made trade deals with China and Persia and put Portugal on the path to being the richest country in Europe and a global empire. All in all, Manuel I was seven kinds of awesome.

King João III: The good times kept rolling with João III who basically reinforced the gains made in the reign of his father. He gave up fighting the Muslims for deserts in North Africa to focus on strengthening Portuguese footholds in Brazil and Asia but the wealth in trade caused infighting by officials and more competition from other powers. He also had to deal with the Turks but also made contact with Japan and gained Macau in China. Also devoutly religious, he established the Portuguese Inquisition, encouraged education and expanded the holdings in Africa from which the first slaves were imported to Brazil. He had a tough act to follow and maybe did not do quite as well but he had a lot to deal with so we should give the guy a break. He did good all things considered.

King Sebastião: Coming to the throne young, Sebastião must have seemed like a fairy tale prince. He was tall, strong, blonde, known for his bravery and piety, just everything the ideal prince was supposed to be. As a minor, he had a regency and his actual reign was not very long but did see the expansion of Portuguese power in Africa, reform of the law code and advances in promoting social welfare. He wanted to get along with England, France and Germany and be a good Catholic. He wanted to launch a crusade against Morocco but Spain wouldn’t help. Young King Sebastião went on his own, charged into the Islamic horde and was killed in battle at only 24. Young, handsome, virtuous and brave, such a death was the finishing touch to a king tailor-made for legendary status.

King Henrique: The death of Sebastião left no one but Henrique to succeed to the throne and, as this had never been expected, he had already joined the Church and risen to the rank of cardinal when called to assume the throne. As Archbishop of Lisbon and head of the Inquisition, he brought the Jesuits in and their missionary activity spread across the global Portuguese empire. He asked to be released from his vows to marry and produce and heir but King Felipe II of Spain, who wanted Portugal for himself, objected to this and so the Pope would not allow it. Cardinal Henrique did not live long enough to do very much and his death sparked off a crisis as to who would control the extensive and lucrative trade network that Portugal had established.

King Antonio: The natural grandson of King Manuel, Antonio is not always listed among the ranks of Portuguese monarchs as he was more a claimant to the throne than an actual monarch. He set up his own court and was acclaimed by some but had little luck against the powerful Spanish army led by the Duke of Alba who came to secure control of the country for Felipe II of Spain. Forced to clear out with as much wealth as he could carry, he was recognized by France and England only as a way to bedevil the Spanish as I doubt anyone took him too seriously. He never really proved his claim and eventually died penniless in France.
Posted by MadMonarchist at 2:34 AM