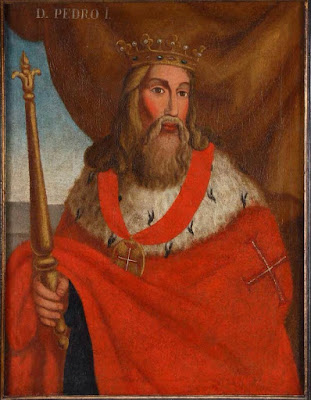 The House of Burgundy

King Afonso I Henriques: Known as “the Conqueror” or “the Founder” or simply King Afonso the Great, this Portuguese born son of Henry of Burgundy, Count of Portugal, came up as a vassal of the Spanish King of Leon during the war to liberate the Iberian peninsula from the Moorish Islamic invaders. Afonso proved to be a great warrior and a formidable military leader. After the smashing victory at Ourique he was proclaimed the first King of Portugal in 1139. He married a daughter of the House of Savoy, proved adept at political maneuvering and switched the King of Leon for the Pope in Rome as his feudal overlord. Overall, a pretty great king to whom the existence of Portugal as a country is owed.

King Sancho I: Although he is understandably often overshadowed by his father, the second Portuguese monarch was quite an accomplished guy. He took the country his father had created and made it work, giving it a proper administration, an economy, businesses and so on. He also stopped fighting with his fellow Christians and concentrated on the Moors to the south, which is always to be preferred. He built several new towns and was noted for his love of literature and attached great importance to education. This would pay large dividends later on. King Sancho also understood the importance of demographics and made sure to move people into unoccupied areas of the country to solidly their possession. Hence his nickname, “Sancho the Populator”.

King Afonso II: Remembered for his rotundity, the third King of Portugal liked the peace and quiet. He made peace with both his Christian and Islamic neighbors and decided not to push to expand his kingdom further. His priorities were domestic and, unlike his two predecessors, was a bit of a control freak who worked to centralize power in his own hands. This put him at odds with his feudal overlord the Pope as the Church held considerable power in the country, leading to Afonso II being excommunicated by Pope Honorius III. He tried to repent but sadly died still shut out from the Church. On the whole, not a monarch who really accomplished a great deal.

King Sancho II: After a king who was excommunicated, it is only fair to have one known as “the Pious”, though the Church authorities might dispute that. He had to agree to a long list of concessions to win back the good graces of the Pope but got high marks for shrugging off government to wage war on the Muslims, which he excelled at. Unfortunately, his absence meant he wasn’t around to protect the Church from the merchant class and they complained to the Pope who declared Sancho II a heretic and his throne to be free for the taking. His brother in France, another Afonso, joined with rebellious nobles in fighting a civil war against Sancho II, eventually forcing him across the border into Spain where he died in exile.

King Afonso III: Put on the throne by Pope Innocent II, Afonso wanted to succeed where his brother failed so he focused on administration. He had his military successes to, most notably the conquest of the Algarve, adding that to his royal title but he also wanted to ensure domestic tranquility by having everyone share in the privileges and responsibilities of government. He gave the common people representation in government, fine, he taxed the merchant class, fine and he taxed the Church…which was not fine. In fact, it got him excommunicated, making two kings in a row and so upsetting him that he dropped dead at 68 after an otherwise successful reign.

King Dinis: Brought to the throne at 18, he took care to make amends with the Church, even marrying a future saint, Elizabeth of Aragon, and he brought considerable prosperity to Portugal. Dinis expelled all foreigners from positions of power, made Portuguese the official language, encouraged education and greatly improved agriculture as well as tapping into what resources the country had to offer. Soon, he had such a surplus that Portugal had a booming export economy. He hired some Italians to start the Portuguese navy and he founded the Order of Christ, mostly from former Templars after their order had been suppressed. He centralized power, made Lisbon the capital and greatly furthered the country’s development. All in all, a very successful monarch.

King Afonso IV: He had it rough, not being very well liked by his father and if there was one word to sum up the reign of Afonso IV it would be “drama”. Portugal was one long soap opera or novella in these years. There were civil wars between Afonso IV and his brothers, his daughter was married to a Spanish prince who cheated on her, leading to conflict there, his son wanted to marry his mistress but the King had her locked up in a convent, then when she was killed the crown prince started a rebellion against his father and this carried on until Afonso IV finally died. If you were writing a series of romance novels, your publisher would probably tell you to tone it down but truth is not only stranger than fiction, it can be more dramatic too.

King Pedro I: The tragic, forbidden romance of Pedro and Ines and his subsequent rebellion against his father has made this king possibly the most visible in popular culture with numerous stories, songs, operas and so on all written about his rise to the throne. I really want to believe that he had Ines dug up and crowned queen alongside him but that may be just a legend. More people believe that he found the men who murdered his beloved and ripped out their hearts with his bare hands. Harsh, but fair. And that is not only my opinion as he has been known as both the “just” king and the “cruel” king. He also ensured that he would be buried facing his beloved Ines. What else of his reign? Who cares?! He was the great avenger of his true love and I think he was awesome, I hope all the stories are true.

King Fernando I: The reign of the first Fernando was taken up with the Castilian succession war in which the kings of Aragon and Navarre, the English Duke of Lancaster and Fernando I of Portugal all claimed the throne of Castile. Fernando and the Duke of Lancaster made a deal to try to knock off the King of Castile but it didn’t work out. Later, they tried again but John of Gaunt (the duke) got on the King’s nerves and he broke his alliance and made a deal to marry his daughter to King Juan of Castile whose children would rule both countries. This didn’t happen though and the lack of a legitimate male heir brought an end to the Burgundy line of kings, an interregnum, some warfare and eventually a new dynasty to the Portuguese throne.
Posted by MadMonarchist at 11:20 PM