Accidental Lessons from Hollywood on Monarchy 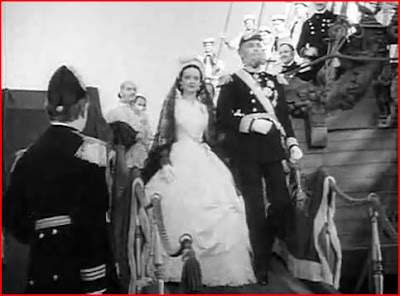 The 1939 film "Juarez", a biopic of Mexico's most famous president, is well worth looking at for monarchists, even if that seems odd. Juarez is upheld as the 'Abraham Lincoln of Mexico' and this point is driven home hard in the film to the extent that Juarez is rarely seen on-screen without a portrait of Lincoln in the background. It is a love letter to Benito Juarez and makes no apologies for that. However, it does not vilify Emperor Maximilian and Empress Carlota either. Being all about deifying Juarez, it certainly is against the monarchy and their very presence in Mexico, however, it spares the idealistic couple and focuses its wrath on the French Emperor Napoleon III. From the perspective of this film, Napoleon was the real villain, a wicked tyrant on a mission to eradicate democracy and republicanism in the New World whereas the handsome young couple, Maximilian and Carlota, are pitiable dupes; good people tricked into an "evil" enterprise by a manipulative Frenchman. Because of this, the Emperor actually comes off as a rather sympathetic figure. For a broad overview of the film, you can read a review of it here.

For me, one part of the film, two scenes, really stand out as being worthwhile, though they will be of most benefit only to those who know their history and in light of the events of our own time. In the first, Emperor Maximilian comes to meet with the captured rebel General Porfirio Diaz in his prison cell, in an effort to convince him to take a message to his president, offering to make Juarez the Prime Minister of the Mexican Empire. Emperor Maximilian has some very good lines as he makes the case for having a free and liberal society with a benevolent monarch at its head as a sort of safety valve. He presents such a good case that he seems to have won Diaz over and convinced him that the Emperor is a man of sincerity who wants the same things for Mexico that Juarez wants and Diaz goes to deliver this message to the President along with his offer to make Juarez his premier and allow him to run the government of Imperial Mexico. The next scene is Juarez, with kindly bemusement, listening to the naive, young general who has been duped by Maximilian. Juarez then starts preaching the republican gospel to Porfirio and showing him the error of his ways. 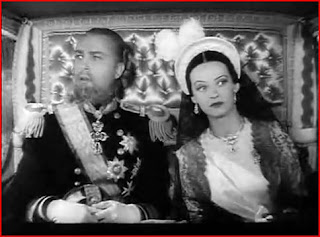 This scene, coming after the heartfelt speech of Emperor Maximilian in the previous one, is enough to make any monarchist who is familiar with the history of republicanism, and Mexico in particular, roar with laughter at how Hollywood inadvertently shows just how painfully wrong Juarez was in all of his speechifying on the glories of democracy. In the first place, they make much about the constitution that Juarez wrote, however, any honest historian of the period knows that Juarez himself violated the constitution he wrote on numerous occasions. Part of what makes constitutions ultimately worthless is that they can only do good if they are adhered to voluntarily, which could be done without them, and they have no power on their own to prevent anyone from violating them. Even the United States is proof of that and it has a record better than most republics in that regard.

Juarez explains to poor, ignorant, Porfirio that Maximiliano duped him. When Diaz explained how honest and sincere the Emperor was, Juarez responds that, "virtue is a powerful weapon in the hands of an enemy" which is meant to sound "wise" but is absurd if you think about it for more than a second. It essentially says that Maximilian is wrong regardless of whether he is wicked or virtuous. He says that the unbridgeable gulf between himself and Maximilian is "democracy" and that this is the right of men to rule themselves. He explains that since a man never rules himself into bondage, freedom flows from democracy like the rivers flow from the mountains, just as naturally and serenely. This is, of course, quite hilarious given that Mexico itself democratically voted itself into bondage more than once. The PRI, for example, held tyrannical control over Mexico for the better part of the last century. Yet, the current President of Mexico was the leader of the PRI, voted back into power after a break of only two non-PRI presidents. It is also extremely laughable in the context of Juarez, a man who came to the presidency not by election, speaking to Porfirio Diaz who would go on to lead a rebellion against Juarez, then run for president himself, winning on the promise that he would serve only one term, only to then rule as dictator of Mexico for the next 35 years!

It is quite a howl that virtually everything Juarez and Diaz talk about in these scenes as being the major problems of their country; too much land owned by too few, a privileged elite prospering while the masses are impoverished, freedom of speech being suppressed, even selling out to foreign influences (such as the French) are ALL accusations made by many against General Diaz himself during his hold on power from 1877 to 1911 (with a small break in there). At the end of the scene, Juarez says, again -so profoundly, that when a monarch misrules, he changes the people but when a presidente misrules, the people change him. A perfect ending really, given that the liberal-democratic leaders of North America and Western Europe are doing precisely what Juarez said the wicked monarchs do, they are changing out their peoples for a new batch that will keep them in power. Irony doesn't begin to describe it. And yet, what is the final cherry on top of this heaping bowl full of republican hypocrisy? The fact that Juarez, the native Mexican fighting against an Austrian Emperor, was played by Paul Muni, real name Friedrich Meshilem Meier Weisenfreund, a Jew from Galicia in what was then Austria-Hungary. So, yes, instead of giving the part to a Mexican actor, Benito Juarez was played by an actor from Austria.

Oh Hollywood, you really are too much sometimes...
Posted by MadMonarchist at 4:46 PM