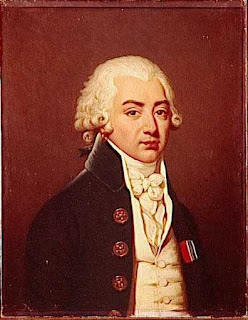 The life of Armand Louis de Gontaut, Duc de Lauzun, better known in the Revolutionary period as Biron as he had by then become Duc de Biron, offers a great many lessons even for people today. He was a leading Freemason in France, a known proponent of the values of the “Enlightenment” and was very much a figure of the fashionable left, well known and quite popular with the elite ‘chattering class’ of high society people who loved flattering themselves, competing for radical credentials and discussing revolutionary ideas in their salons. The Duc de Lauzun was born in Paris on April 13, 1747 and grew up as a figure of the anti-traditional aristocracy. He married and was very popular in leftist high society, though it was not known as “the left” at the time of course. Like most of his friends, he still thought very highly of France in an abstract, civic way but spent his time pouring scorn on the traditions of France, never taking into account that, as an aristocrat, his very fate was bound up with those traditions he was undermining. It was, however, in the service of France, that he had his first real profession which was as a soldier.

In the aftermath of the disastrous French & Indian War (Seven Years’ War for Europeans), the French military was reformed in a major way. All too often historians today ignore how King Louis XVI of France had improved and revitalized the French army which Napoleon was later to lead to so many victories. Training, tactics, weapons and equipment were finally standardized, military academies were established, purchasing commissions was stopped, one light and one heavy company was added to each infantry regiment of the line, Prussian order tactics were adopted and so on. A group of eight new units were created, known as legions, of Volontaires étranger de la Marine for overseas service. These units were made up of Poles, Germans, Hungarians and exiles from Ireland and were combined arms formations with each having two fusilier, one grenadier and one chasseur companies as well as artillery and cavalry (hussars) in their own independent companies. The idea was to have units that could move quickly, pack a punch and be able to respond to any given situation with their own infantry, cavalry and artillery components. The British were set to do the same with such units as the Queen’s Rangers or the British Legion. A more modern example of something similar would be the battle groups of World War II.

The Duc de Lauzun gained some attention for capturing a British fort in Africa, Fort St Louis in Senegal, in early 1779 but it was the second of these foreign, marine legions that Lauzun raised and was given command of, along with the rank of brigadier in the corps overall. His unit soon became known as Lauzun’s Legion and was included with the French corps under the Comte de Rochambeau which was sent by King Louis XVI to aid the rebel colonists in America, led by George Washington, against the British during the American War for Independence. A lack of sufficient transportation forced Lauzun to leave many of his men behind but he was able to take several hundred infantry, cavalry and gunners who would make something of a name for themselves in the climactic Yorktown, Virginia campaign. A particular moment of glory was the action at Gloucester Point on October 3, 1781 when Lauzun’s Legion met and bested a British force under the fearsome Lt Colonel Banastre Tarleton, probably the best British cavalry officer of the war. Colonel Tarleton and the Duc de Lauzun almost engaged in personal combat but Tarleton was brought down when his horse was wounded and was taken away by some of his own men, narrowly avoiding being captured by the French. It was the largest cavalry engagement of the war and the British had been forced to retreat.

Not surprisingly, the Duc de Lauzun, after the surrender of the British at Yorktown and subsequent recognition of the independence of the United States of America, returned home to great fanfare as a genuine war hero. King Louis XVI promoted Lauzun to maréchal de camp for his exploits. However, Lauzun started on a new career in politics after the King, reluctantly, recalled the Estates-General. The Duc de Lauzun was chosen to be a deputy for the nobility of Quercy and, not surprisingly, became an outspoken advocate of the Revolutionary cause. When the French Revolution began, despite all of its ridiculous egalitarian thundering, the Duc de Lauzun was an ardent supporter. That is important to understand as he was not simply going along to get along as many other cowardly aristocrats did when the disaster came, he was taking his earlier political views to their logical conclusion and was just as devoted to the cause of the Revolution as he was to eradicating any who opposed it. In 1791 he was trusted with taking the oath of the French army of Flanders and was subsequently given command of that army. The following year he was given command of the Army of the Rhine to stand guard against the Austrians.

In every way, the Duc de Lauzun was a devoted revolutionary. After one year of watching the Rhine, he was assigned to deal with internal enemies, taking command of the army at La Rochelle in May of 1793. It was in this capacity that he aided in crushing the counter-revolutionaries of the Vendée, the heroic Catholic royalists who had risen up in the name of their faith and their monarchy. Lauzun, or Biron as he was then, was not the most brutal in suppressing these faithful people but he was certainly zealous. He gained credit for taking Saumur (site of a royalist victory in June) and winning the Battle of Parthenay. However, his troops had become increasingly disorderly and his superiors, in their typical revolutionary paranoia, began to have greater fears and suspicions about their accomplished duke. They subjected him to numerous questions, interference in his command and other harassment until he finally resigned his command. In spite of it all, the only thing they could actually accuse Lauzun of was being insufficiently vicious in his treatment of the counterrevolutionaries. He had never shown any lack of support for their cause but the charge that he was too lenient, too soft, on the enemies of the Revolution would haunt him.

The aristocrat, Duc de Lauzun, had sided against his class to support the Revolution but, in the end, he discovered that this would not save him. The barbaric firebrand Jean-Baptiste Carrier accused Lauzun of treason or “lack of civic virtue” in the revolutionary parlance and in July of 1793 he was stripped of all rank and offices and imprisoned. After a quick show trial by the Revolutionary Tribunal he was taken to the guillotine and beheaded on December 31. His wife was also subsequently arrested and she too went to the guillotine the following summer. So it was that the story of the Duc de Lauzun came to a tragic end, yet, it is hard to imagine anyone feeling much sympathy for him. Here was a man who was a traitor to his king, his country, his religion, his class and the entire civilization that birthed these things. In the end, he was also condemned as a traitor by his fellow traitors and that at least provides a valuable lesson, even for people today.

Although the French Revolution is usually portrayed as a mass uprising of the common people against the monarchy and a corrupt, decadent aristocracy, we must remember that, in terms of numbers, it was the common people who suffered the most from it. Whether out of conviction, as seems to have been the case with Lauzun, or mere self-preservation, not a few aristocrats decided to take the side of their natural enemies and join the Revolution. It should also not be forgotten that no small number of clergymen did as well in what was rather like the “liberation theology” of its day. They were, in their own way, no different from many of the so-called conservatives we see today who go along with the liberals either because they are dishonest and are fervent liberals themselves or because they think that the goodwill and cooperation they show the liberals will be returned to them. As we see in the case of the Duc de Lauzun or, to take a more lofty example, the Duc de Orléans, “Philippe Égalité” who voted for the death of his first cousin the King only to ultimately be sent to the guillotine himself also in 1793.

The revolutionary fervor of these men did not save them from being consumed by the flames they helped to fan in the first place. The drivers of the Revolution, with all of their egalitarian rhetoric, were happy to have the help of aristocrats like the Duc de Lauzun to gain power but they turned on them in the end since, no matter what their opinions, words or actions were, *who* they were, the very blood that was in their veins, made them the enemy. The Duc de Lauzun was obviously a man of talent, an aristocrat who, as such, was a natural leader. His military victories show what great deeds he was capable of and yet he could not or would not grasp the simple facts that his own revolutionary cohorts could; that a prince and a peasant are two different things that can never be the same, no less than a Swiss and a Saracen or a man and a woman. Aristocrats like the Duc de Lauzun, clergymen or even princes of the blood would never be more to the revolutionaries than what Stalin referred to as “useful idiots”. Some, like the famous Marquis de Lafayette, were able to survive but revolutions tend to ultimately feed on themselves and the Duc de Lauzun, as with most others who did not manage to escape the country, fell victim to the forces he had helped unleash. One can but wonder if, on his way to the guillotine, he did not have the awareness to regret the terrible path in life he had chosen to take. His life and his death should be a warning to anyone who thinks they can make common cause with the forces of darkness, posing as the forces of “enlightenment”.
Posted by MadMonarchist at 10:11 PM