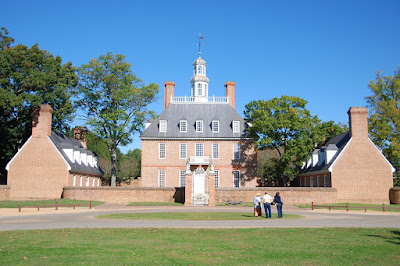 The British Royal Governor's Palace of Virginia is one of the most prominent structures of colonial Williamsburg. It was the residence of the Royal Governor of Virginia during the colonial period and was home to seven royal governors, starting with Alexander Spotswood and ending with John Murray, the fourth Earl of Dunmore who was forced out of his position during the American War for Independence. The original palace was built starting in 1706 with funds voted by the House of Burgesses at the insistence of Lt. Governor Edward Nott. By 1710 it was sufficiently finished to be the residence of Lt. Governor Alexander Spotswood who held power in the absence of the actual Royal Governor, the Earl of Orkney (who as far as we know never actually set foot in Virginia). As such, it was the center of royal authority for the colony until the outbreak of revolution forced the Earl of Dunmore to evacuate in 1775 after the arrival of the Hanover militia under Patrick Henry. Dunmore retreated to the coast and then to a British warship after which he famously promised emancipation for any slave who joined the British cause, resulting in the raising of the short-lived "Ethiopian Regiment". This action turned the Virginia planters zealously against the British cause and, being early in the conflict, left Dunmore and his loyalists and escaped slaves with no military support and they were soon defeated.

During the war, Patrick Henry and future President Thomas Jefferson served as governors of Virginia in succession, occupying the residence until the capital was moved to Richmond due to the threat of the British returning which was a constant worry due to the domination of the east coast by the Royal Navy. Toward the end of the conflict, the palace was used as a military hospital during the siege of nearby Yorktown and in 1781 the main building was destroyed by fire. Most of the subsidiary buildings which remained were then destroyed during the Peninsular Campaign of the American Civil War in 1862. The Battle of Williamsburg, fought on May 5, 1862 between the armies of George B. McClellan and Joseph E. Johnston was the first major engagement of the failed effort to capture Richmond by way of an amphibious landing on the Virginia coast. Both armies demolished the remaining buildings of the palace complex to make use of the materials.

At long last, in the early XXth Century, with money gifted from J. D. Rockefeller, the Royal Governor's Palace was rebuilt in its entirety using historical documents and descriptions from the period. It has since been renovated as new information has been uncovered to make it as historically accurate as possible. An exhibition of the palace, outbuildings and grounds was first given to the public in 1934. It is the second largest building in colonial Williamsburg after the capital building itself. Today it is a museum and often part of the whole "living history" experience that is maintained in colonial Williamsburg, making it easier to imagine what it was like back in its day as the center of society and government for the colony of Virginia under the British Crown. More information can be found on the official webpage of the palace here.
Posted by MadMonarchist at 1:33 PM