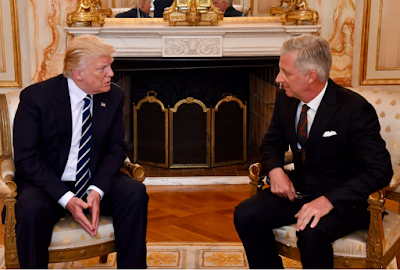 U.S. President Donald Trump is currently on his first foreign trip as chief executive and has stopped in at some places of royal significance and met with a few monarchs. As best as I can recall, the first monarch to meet with him as president was King Abdullah II of Jordan and on this trip he has met with King Salman Abdulaziz in Saudi Arabia, Pope Francis (sovereign of the State of Vatican City) in Rome and with King Philippe of the Belgians in Brussels while in town to talk to NATO which, while running for office, Trump dismissed as "obsolete" and a rip-off for the United States but, after proper coaching from the neocon clique, he now says is "not obsolete" and is just great. Whatever. In between Riyadh and Rome he also stopped in at Jerusalem but, of course, there was no royal to meet with in Israel. In fact, no reigning European monarch has ever visited the State of Israel, though I think an African royal from a no longer reigning family might have visited a long time ago in an official capacity. European royals have made unofficial visits but as far as full-fledged, government sanctioned, roll-out-the-red-carpet type state visits or official visits of any kind, there has never been one. Recently, some where saying the British might be the first, but, personally, I doubt it. 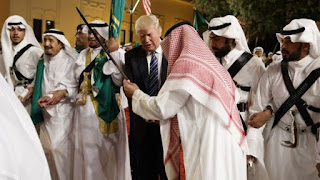 As for Trump meeting with the King of Saudi Arabia, I am less than pleased. He certainly got a much warmer reception than Obama had, despite the media constantly informing everyone that Trump is "Islamophobic" and he did not kowtow nor did the First Lady cover her hair. The Arab monarchs seemed to have intentionally moved to meet with Trump quickly and put on a great show of friendship but, personally, I am not buying it. As I have long said, I would prefer the Arab monarchs to the most likely alternative which would be a Sunni version of the Iranian Islamic theocracy but being so cozy with the Saudi king and selling him so many weapons does not sit well with me. The level to which America has befriended the Arab monarchies, even to the point of fighting a war to restore an absolute monarch to his throne, has not resulted in any increase in goodwill from the Islamic world (or among monarchists I have noticed) and any sort of benefit remains unknown to me. The Middle East is going through an Islamic civil war with Iran and the Shiites on one side and the Saudis and other Arab states and the Sunnis on the other. I think America should stay completely out of this and not picking a winner between two sides which, frankly, each despise the United States. 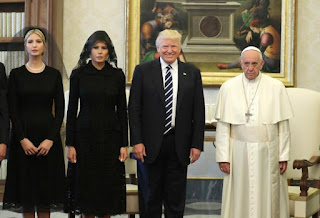 Moving on from Jerusalem to Rome, President Trump met with Pope Francis, something which caused some anticipation given that the two had some cross words for each other in the past. The Pope saying that anyone who wanted to build a wall on their border was not a Christian, so I guess he got over that, "who am I to judge?" sentiment, at least on certain issues. I suggested that, upon arrival, Trump might complement the Pontiff on the extremely high walls that surround Vatican City and his private army of Swiss mercenaries who, backed up by the Italian police, keep the little papal state secure. Somehow, I doubt that happened. Trump seemed much more pleased than the Pope but a Vatican spokesman said that the two found common ground on the subjects of "life, religious liberty and freedom of conscience". That sounds nice. However, I could not help but notice that of the three items listed, the Catholic Church was, until fairly recently in ecclesiastical terms, absolutely opposed to all but one of them. 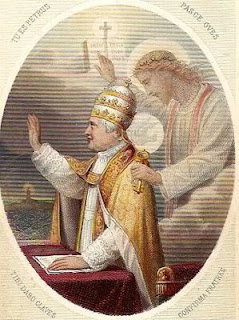 The Pope also urged Trump not to pull out of the Paris "climate change" agreement which seems just as bizarre a thing for a pope to be stuck on as it is to hear a pope advocating for democracy, freedom of religion and the separation of Church and state. Has Pope Francis perhaps heard of his predecessor (Blessed) Pope Pius IX? He might read Pius IX's controversial Syllabus of Errors and see how far it coincides with his own views. Of course, they might say that Pius IX was speaking about areas beyond his field of expertise but, last I checked, this would likewise apply to Pope Francis talking about "climate change". Again, it also just seems an odd subject for a pope to take up, rather smacking of monumental human arrogance to think that a group of powerful men are going to get together and sign agreements that will change the weather. Past pontiffs might, I suspect, have been more concerned about Trump being a protestant or his multiple divorces than his position on the planet's temperature. However, the meeting of these two men, with the media constantly repeating how completely opposite they are, also called to mind something I doubt you will see anywhere else. Yes, it's just that mad.

This meeting has obviously been implied to be a meeting of humility and arrogance, the austere and the opulent and yet, I think that may not be all wrong but not in the way people are thinking. Just consider this for a moment. In numerous official statements from President Trump and his staff, Trump has repeated over and over that he is "learning" more and more all the time about how things work. He has certainly changed many of his positions since he was elected to office (not a good thing in my view btw) and that would necessarily reflect an admission of error. Yet, on the other hand, Pope Francis has said that the papacy has not changed him at all. He is exactly the same man now as he was before his election. In fact, the papacy has had to change considerably in order to adapt to him rather than him adapting to the papacy, everything from dress codes to living arrangements to security procedures have had to be changed. Which then, at the bottom of it, is the more "humble" attitude? One man attains high office and must learn and adapt while the other attains high office and says he has not changed at all, which is to say, there must have been no room for improvement. Of course, I'm probably wrong but that is what occurred to me anyway.

Lastly, as for Trump meeting with the King of the Belgians, it seemed to go well enough but frankly there was not much to that. It was more of a courtesy call than anything else. Trump is there to talk to NATO, to two the neocon line and since Belgium currently has a government, there is little for him to do in terms of national decisions. Perhaps, at least, the fact that King Philippe and Queen Mathilde survived will reassure the British that the Queen and Prince Philip will not be subjected to any immediate danger from meeting with the Trumps. After recent events in Manchester, perhaps they are reconsidering how terrible Trump's suspension of travel from countries like Libya might be? Well, of course not, that would just be crazy...
Posted by MadMonarchist at 2:22 PM