The Battle of Aspern-Essling, Austrian Victory Over Napoleon 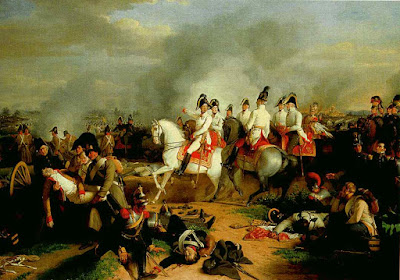 It was on this day in 1809 that the Battle of Aspern-Essling was fought, during the War of the Fifth Coalition, between the forces of the French Empire of Napoleon Bonaparte and the Austrian Empire of Kaiser Franz I, with the Imperial and Royal Army being led by Archduke Charles of Teschen, probably the most formidable continental foe of the illustrious Corsican conqueror. The battle is not generally listed among the most significant of all time in the world but it was certainly not unimportant and had some very interesting aspects. It was a dark time for the Austrian Empire, Vienna had recently been taken by the French and the French or their allies were in possession of much of the Austrian heartland. Napoleon wished to cross the Danube and finish off the Archduke and his army but the Austrians had done a good job of destroying the bridges to hinder this effort. The idea, however, was to hinder and not attempt to stop, which the Archduke did not wish to do. Instead, it was his intention to allow Napoleon to cross the Danube so as to be able to fall upon his forces as they came across, before the entire Grande Armeé could arrive in force and concentrate against him. The Austrian plan was for the French to cross the river and they would then attack them on a front from the village of Aspern to the village of Essling.

This was an excellent plan as it made the best use of the situation that the Austrians found themselves in. It would allow them to attack and annihilate a part of the French army which would be too strong to defeat when it was altogether and the French had to come after them, not only to deal with the threat that the Imperial & Royal Army posed to the French occupation of Vienna but also because Austrian irregulars led by the great hero Andreas Hofer from the Tyrol, were wreaking havoc on the French supply lines and rear echelon forces. The French had to move, they had to cross the Danube and as they did, Archduke Charles would attack them. He organized three of his corps (the Sixth, First and Second) to attack Aspern while the Fourth Corps would attack Essling. In the center, to respond to any French cavalry attack, was the commander of the Austrian reserve cavalry corps who happened to be Prince Johann I Joseph of Liechtenstein who had been, and would be again when the current crisis passed, the Sovereign Prince of Liechtenstein. Believe it or not, long before they were known for banking and art collecting, the Princes of Liechtenstein were more familiar as members of the Austrian army.

On May 21, 1809 as the French army was getting across the Danube, the Archduke launched his attack. First, at Aspern, the initial Austrian blow was dealt by General Johann von Hiller where he smashed into the French forces of General André Masséna, who he had fought before at Ebelsberg when the Austrians had been forced across the Danube. The fighting then had been savage and it was no less fierce on May 21. The French offered tenacious resistance as the successive waves of three Austrian army corps came smashing down on them, converging on their location. Street by street, house by house, the Austrians inched forward, slowly, painfully but inexorably until it seemed the French might not hold. Concerned that his flank would be turned, Napoleon launched an attack on the Austrian center, aimed at their artillery which was shelling French positions in Aspern. The French heavy cavalry in their shining cuirasses and plumed helmets with horsehair manes, rumbled forward, smashed the Austrians guns and took care to avoid the soldiers in square led by one Prince Friedrich Franz Xavier von Hohenzollern-Hechingen. He was from a different branch of the House of Hohenzollern than that which ruled the Kingdom of Prussia and, in fact, he had fought against the Prussians during his long military career. The French dashed around his infantry but met the Prince of Liechtenstein’s cavalry and though they made a good showing, they failed in their ultimate goal of diverting the Archduke from his plan of attack.

Meanwhile, at Essling, the town was hit by the Austrian Fourth Corps under Prince Franz Seraph of Orsini-Rosenberg whose family had been barons of the Holy Roman Empire of the German Nation and Imperial Counts. He faced the French Second Corps under Marshal Jean Lannes, who would ultimately lose his life in the battle. Once again, the fighting was fierce, the French just as determined in defense as the Austrians were determined in attack. By the time night fell, the French still held about half of the village of Aspern, the other half being in Austrian hands and while they also still held Essling, the Austrians had advanced so close that the two armies were said to be camped with pistol shot range from each other. As it was, Napoleon was confident that his troops had done well holding their ground and that the following day he could work one of his military miracles and bring about another French victory.

As dawn broke and the fighting erupted again on May 22, the confidence of the French Emperor seemed well founded. In Aspern, Masséna launched a counter-attack that stunned the Austrians and swiftly drove them back and out of the village. Simultaneously, Prince Orsini-Rosenberg was attacking Essling, however, Marshal Lannes and his men held on, were reinforced and launched their own counter-attack which, likewise, drove the Austrian forces from the town. However, that good news was followed by worrying news. At Aspern, the Austrian generals Hiller and Heinrich Graf von Bellegarde (a Saxon born officer from a noble family of Savoy) who commanded the Austrian First Corps, counter-attacked and smashed Masséna, driving the French out of town. Napoleon had to do something and he decided, once again, to launch a frontal attack on the Austrian center, this time with much more muscle. He aimed at precisely the point where the Austrian forces of the Prince of Hohenzollern and the Prince of Orsini-Rosenberg came together.

The French troops surged forward, infantry at the front, Lannes leading his men on the left and with cavalry in reserve. They hit the Austrian line and, as planned, the Austrians broke, each corps pulling back and the French charging into the opening. Napoleon had victory in his grasp, with the Austrian center broken, each wing could be rolled up in turn, attacked from flank and rear. However, at that critical moment, Archduke Charles himself personally led his last reserve forward, holding a Habsburg flag as he rallied his faltering soldiers. The Austrians held their ground, the French wave crashed against them but could go no farther. Along the line, the French were stunned and being shot to pieces. At the same time, unknown to the French, the Austrians had set several barges adrift on the river which moved downstream and at that moment hit the hastily assembled French bridges, destroying or damaging them. Napoleon feared his line of escape would be cut off and he would be trapped and destroyed on the riverbank so he called off his stalled attack.

At Essling, the fight continued to be bitterly fought and see-sawed back and forth. The Prince of Orsini-Rosenberg attacked again and the Austrians took Essling but the French were able to counter-attack and drive him out. However, fearful of being cut off, Napoleon had ordered his men to fall back and so the Prince of Orsini-Rosenberg decided to shift his attack toward the French center since he had found no joy at Essling. Marshal Lannes fought a sort of rear-guard action, holding the Austrians off as long as possible while the French army retreated. He was mortally wounded in the process and by the end of the day, both armies were totally exhausted. Both sides had lost about 23,000 men killed, wounded or captured. It was not a decisive victory as Napoleon was able to escape with his army, nonetheless, it was a solid victory for the Austrians and Archduke Charles had done something that many had begun to think impossible; for the first time in about a decade, the famous Napoleon Bonaparte himself had been defeated in battle and the Archduke was the man who had done it. In the end, it was undone by another of Napoleon’s great victories at the Battle of Wagram which saw Austria defeated at the Fifth Coalition broke up, forcing the Kaiser to come to terms with Bonaparte. Still, the sting that the Habsburg Archduke had given him at Aspern-Essling meant that, while the terms of peace were certainly harsh, Napoleon was much less vindictive than he might have been and hoped to have Austria as a friend rather than a foe in the future.
Posted by MadMonarchist at 5:31 AM