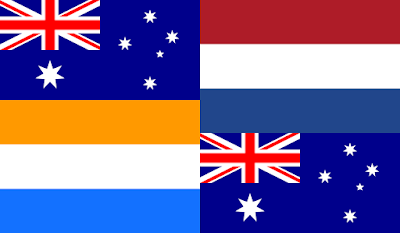 Currently, Their Majesties King Willem-Alexander and Queen Maxima of The Netherlands are visiting the Commonwealth of Australia. The focus is, of course, on friendship and furthering close ties between the two countries. Many outside of the area may not know that the Dutch-Australian connection goes back a very long way. Such a connection should, however, be obvious given how many Dutch names predominate in and around Australia. In the past, this was even more evident. The island of Tasmania was originally known as Van Diemen's Land in honor of the Governor-General of the Dutch East Indies at the time it was explored and the Australian continent itself, early on, was often referred to as "New Holland" because the region was first explored and mapped by Dutch navigators in the 17th Century. They did not nothing to actually establish control over the area and, a short time later, the British arrived and began establishing the colonies that grew into the countries we know today. In centuries past, the Netherlands was quite dominant in the region, having sole access to Japan, control of Formosa, the East Indies, Ceylon and ties to other areas.

The establishment of Australia came after the rivalry and series of wars between England and The Netherlands so that they have a history of mostly friendly relations. This will certainly be what is highlighted on this royal visit. The closest the two countries ever worked together was undoubtedly during the Second World War when the Dutch East Indies was conquered by Japan and those Dutch who could escape fled to Australia which became the headquarters of the Allied war effort in Southeast Asia. Dutch forces trained in Australia, Dutch submarines (O-Boats) operated from Australian ports and so on. However, while state visits such as the one happening now always emphasis the best of relations, there have been periods of tensions between the Netherlands and Australia. During the Boer War, thousands of Australians volunteered to fight for the British Empire whereas, while the Netherlands was not officially involved, Dutch opinion, including that of the Queen, was strongly sympathetic to the Boers, their distant cousins.

More recently, although the Dutch and Australians fought side by side in World War II against the Axis powers, after the war tensions arose over the Dutch fight to maintain their empire or at least some portion of it for the Dutch and mixed-race people of the East Indies. When the Netherlands was trying to maintain temporary control over West New Guinea, as a prelude to it becoming a country of its own for Dutch and mixed-race people, Australia opposed any effort to maintain a Dutch foothold in the area. Australia was certainly not the only power to do so though as the U.K. and U.S.A. also put pressure on the Dutch to abandon the area to the newly independent Indonesia. Current problems, under normal circumstances, would likely have caused Australia to regret this course of action but since these are not normal circumstances in this day and age, it is more likely the Dutch who regret having ever stood up for themselves in the first place.

In any event, as it stands today, Australia and The Netherlands are on friendly terms as I would prefer all monarchies to be and I hope the visit of the Orange royals to the Land Down Under is a resounding success.
Posted by MadMonarchist at 5:24 PM