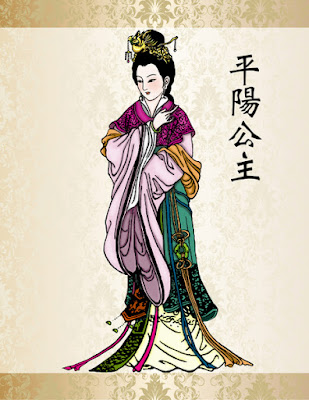 These days, radical feminists would have one believe that in traditional, pre-revolutionary societies women were inevitably treated as property, were oppressed and never allowed to show what they were capable of achieving. Yet, it was in the Middle Ages that Europe saw women who were capable military commanders like St Joan of Arc or Matilda of Canossa. Even earlier, in China, there is the example of Princess Pingyang, a warrior-princess who proved to be a shrewd political and military leader. She was born in 598, during the Sui Dynasty, the third daughter of Li Yuan, Duke of Tang by his consort the Duchess Dou, the only daughter he had by that wife. It was a chaotic time in China as the Sui Dynasty was nearing the end of its life and was beset by internal unrest as well as frantic efforts by the state to lash out in desperation to survive. Her father, military commander of Taiyuan in Shanxi province, had been imprisoned by the Sui authorities and this undoubtedly encouraged him to rebel against the Sui Empire.

He had earlier married Pingyang to the son of the Duke of Julu, Chai Shao and when he determined to rise against the Sui, he wrote to his children, who were in the capital of Chang’an, asking them to come join him in Taiyuan. Princess Pingyang sent her husband along first, knowing that, as a woman, she would arouse less suspicion and could join him later and perceiving that if they all suddenly moved at the same time it could alert the authorities that something was up. At first, Pingyang went into hiding but was all the while working to support her father in his effort to claim the Mandate of Heaven. The Sui Emperor Yang, a rather brutal man who lacked the ability to back up his ambitions, being beaten in separate campaigns by the Koreans in the north and the Vietnamese in the south, provided the final push for the rebellion by ordering the execution of Li Yuan. His daughter was prepared to do everything in her power to prevent that order from being carried out and proved herself cunning and courageous in the process. 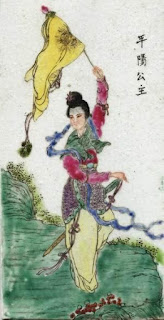 While in hiding, Pingyang disposed of all of her wealth, using it to buy the support of a rough collection of about a hundred leaders and warlords. The region was suffering from famine and she gained a huge amount of popular support by opening up her grain stockpile to the locals, winning their affection and allegiance. Once this was done, she openly rose up in rebellion, along with the other forces of her family, against Emperor Yang. With her own army behind her, she was better placed to increase her forces through her own effective persuasion. Sending off letters via one of her servants, she enlisted the support of the rural insurgent leader He Panren and united under her banner the existing rebel factions of Li Zhongwen, Qiu Shili and Xiang Shanzhi. Her combined forces, because she led them herself, became known as the “Army of the Lady”. Those whose support she could not buy with money, resources or rank in her army, she swiftly defeated on the battlefield, always giving the survivors of her beaten foe the chance to join the winning side and so help make good her own losses.

It is extremely remarkable that a woman such as her was able to accomplish all of this, in a very traditional society based on Confucian morality but also that she was doing so at the tender age of only 20. Veteran, battle scarred bandits and warriors followed her into battle and she demonstrated an amazing range of talent by how she was able to raise such an army, by bribery, inspiration or political maneuvering and then to also lead to victory on the field of combat. She also showed great diplomatic skill in winning widespread support for the cause of her father by distributing food to the peasants as she conquered towns and villages while also keeping her very colorful collection of soldiers from looting or molesting the locals as was often the case with other armies.

Near the end of 617 her father, Li Yuan, crossed the Yellow River into the capital district of Chang’an to threaten the Sui seat of power. With 70,000 men in her “Army of the Lady”, Pingyang represented a threat that the Sui Emperor could not ignore. Unfortunately for him, she crushed every loyalist force sent to oppose her. As her father gathered his forces together, she commanded one wing of his wider army. Her husband has his own troops but each had their own commands and Pingyang was subordinate only to her father and had her own generals serving under her. Together, their combined forces crushed the remaining Sui loyalists. Emperor Yang fled and was finally killed by one of his own disgruntled generals. It was left to his grandson, Emperor Gong, to preside over the final downfall of the Sui, the only significant event of his brief reign. He formally handed over the Mandate of Heaven to Li Yuan who thus became Emperor Gaozu, founder of the Tang Dynasty. His daughter then officially became Princess Pingyang of the Great Tang Empire. Although the new Emperor had eighteen other daughters, none were ever shown as much favor as Princess Pingyang who had played such an important part in the founding of the Tang Dynasty.

There were, of course, other campaigns to be fought to solidify and secure the new dynasty but Princess Pingyang would play no part in any of that and after the successful capture of Chang’an she never set foot on a battlefield again. She had fought because she felt she had to and once her father was placed on the Dragon Throne, her mission was accomplished and she could return to the more peaceful domestic life. Sadly, her life did not last much longer. When she was only 24 or 25 she died in 623. Over the objections of his orthodox Confucian officials, Emperor Gaozu ordered that his daughter be buried with full military honors, in recognition of her part as one of his top generals in the fight to bring the Tang Dynasty to power. One sticking point was the presence of a band and the use of drums which was unheard of for the funeral of a woman. The Emperor, however, insisted, saying that, “The band would be playing military music. The Princess personally beat the drums and rose in righteous rebellion to help me establish the dynasty. How can she be treated as an ordinary woman?”

The life of Princess Pingyang may have been short but it was certainly unforgettable. Her victories were critical, the public support she won was essential and her inspiration was no small part of how the Tang Dynasty was able to establish itself. As it happens, the Tang period would go on to be one of the higher points in Chinese civilization and over all the years since the part played by Princess Pingyang has never been forgotten. To this day she remains a popular figure in art, literature and works of drama for stage and screen. Even so many centuries later Princess Pingyang is one of the most famous and easily one of the most admired women in Chinese imperial history.
Posted by MadMonarchist at 10:47 PM