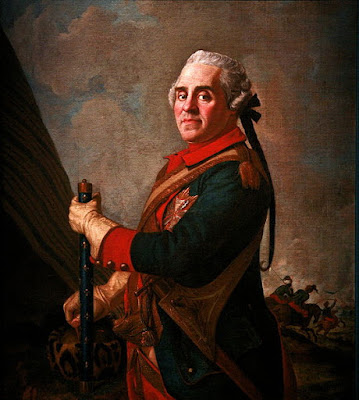 In the annals of the military history of the Kingdom of France (which is impressive despite what detractors say), one name that stands out is that of Hermann-Maurice, Comte de Saxe. Not only was he a brilliantly successful battlefield commander and quite possibly the greatest soldier of his time, he was easily one of the most influential war captains in the history of the world. King Frederick the Great and, later, Napoleon Bonaparte both learned a great deal from the example and the writings of the famous Maurice de Saxe. Born at Goslar, Lower Saxony, in Germany on October 28, 1696 he was the illegitimate son of Augustus II, aka “Augustus the Strong” who was King of Poland and Elector of Saxony by one of his mistresses, Countess Maria Aurora of Koenigsmarck. After only two years he was sent to live with his father in Warsaw, Poland but the tumultuous state of affairs that prevailed in the old Kingdom of Poland meant that he spent most of his childhood elsewhere. His lack of parental supervision also meant that he grew up to be a very independent and self-reliant young man.

Before he was even a teenager he already began gaining first-hand experience at the art of war and that at the hands of one of the greatest captains of all time, Prince Eugene of Savoy. Along with the Prince and his Austrian Imperial forces, Maurice de Saxe participated in numerous successful campaigns, battles and sieges. He threw himself into the occupation of professional soldier and was so fearless that the Prince of Savoy had to remind him that being brave was not to be confused with being reckless. As he served with the Allied forces in the War of the Spanish Succession, with the Saxon military contingent, he was able to see the leadership style and learn first hand from two of the greatest that ever lived, his own commander Prince Eugene of Savoy and the commander of the British forces, John Churchill, Duke of Marlborough, a thoroughly despicable man but quite possibly the greatest English general in history. 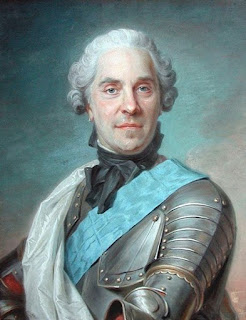 Maurice de Saxe was a quick study, bold and ambitious. He rose rapidly in rank by his own merit, becoming a colonel at seventeen. Ironically enough, the enemy he most often faced was the French, though he also served against the Swedes in the north, at that time serving under the command of another illustrious historical figure; Czar Peter the Great of Russia. When not fighting battles, he also became quite notorious for his womanizing, drinking and rather “colorful” private life. In 1713 he married but spent the fortune of his wife on a string of mistresses and ended by persuading his father to purchase him a commission with a German regiment serving in the French army. A common practice at the time, this was done and in France Maurice de Saxe showed such a talent at training his men, particularly in musketry tactics, that he was soon promoted to brigadier general.
His greatest trial, in personal if not military terms, came soon after when the death of his father sparked the War of the Polish Succession. Loyal to his employer, the King of France, Maurice de Saxe was compelled to face both his own brother, Frederick Augustus II, and his old mentor Prince Eugene of Savoy as Saxony and Austria were on the other side in this conflict.

The young Maurice was able to prove that he had learned his lessons well and he won a string of solid victories. In 1734 he gained his greatest fame to date by his action in covering the siege of Philippsburg. His success on the battlefield more than warranted his rise to lieutenant general by the time the war was over but he was also helped by the fact that King Louis XV had taken notice of him and, even more to the point, he was good friends with the King’s mistress Madame de Pompadour who could be counted on to always speak up in his favor. However, no one should think for a moment that he owed his rising status to his connections at court. His brilliant military leadership was proven time and time again.

In 1740, with the start of the War of Austrian Succession, he first commanded an unofficial “army”, a group of French volunteers fighting for Bavaria. He planned the campaign and led the attack that succeeded in capturing the historic city of Prague and later, when France officially joined the war in 1744, he was sent to Flanders to command the royal army with the rank of Marshal of France. This was a critical period for it would see Maurice de Saxe and his French army triumph over enemies that outmatched his in every way, in training, experience and in numbers. The only thing France had which the others could not match was the mind of Maurice de Saxe himself and he ultimately prevailed over the combined armies of Austria, the Netherlands and Great Britain. 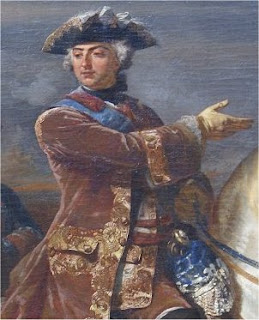 One of his greatest moments of triumph came on April 25, 1745 at the siege of Tournai which clearly demonstrated his remarkable leadership. An allied relief column was approaching and Maurice de Saxe took a portion of his troops and deployed them on carefully chosen high ground at Fontenoy to block this column. This, they successfully accomplished, using a powerful combination of musketry and artillery fire that inflicted very heavy losses on the allied forces. Still, by sheer weight of numbers, it looked as though they would break through the French defensive lines. At that point, Maurice de Saxe, who had been confined to a litter due to a bad case of dropsy, rose up to rally the French troops, inspiring them by his personal example, to beat back the enemy in fierce fighting. Fontenoy would go down as one of the greatest victories Maurice de Saxe ever achieved and he followed it up by capturing Ghent, Brussels, Antwerp, Mons and Namur, cutting a swathe across Belgium and becoming only the third general in French history to be awarded the rank of Marshal-General of France. Unrelenting, de Saxe pushed on into the Netherlands and in the last year of the war won another victory at Lauffeld and captured Maastricht on May 7, 1748.

Once the peace was negotiated, Maurice de Saxe was easily the most prominent military commander in France and widely considered one of the best in the world. In thanks, the King gave him a chateaux, to which he retired but he kept his old German regiment camped on his estate where he continued to refine his training and tactics with them. Sadly, he also continued his very dissolute private life with a succession of mistresses and wild parties. When the famous marshal dropped dead on November 30, 1750 some said he had been killed in a duel while others, more credibly, said it had been after over exerting himself while “interviewing” a group of eight young actresses. Talent and good character certainly do not always travel hand-in-hand. Nonetheless, it would not be for his debauchery that Maurice de Saxe would be best known but for his matchless skill as a military commander, influencing the art of war for ages to come and influencing generations of the great captains of history. 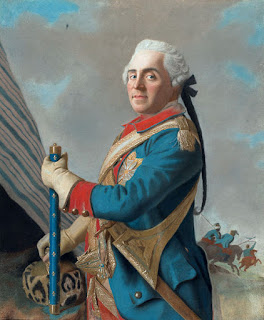 What was it that made Maurice de Saxe so successful? He was an innovative thinker, though not so much in what he fought with but how he used the resources available. He was extremely adept at integrating the use of cavalry, infantry and artillery to best effect and was a master of maneuver. The careful attention he gave to training paid huge dividends in this area as he was able to adeptly move his forces around the battlefield, bringing reinforcements in at the right place at the right time so that he was able, on numerous occasions, to defeat forces far superior to his own. Furthermore, he had a leadership style that galvanized his soldiers. He was able to keep up their morale, inspire them to acts of bravery and determined resistance. His men admired him and his presence on the field at a particular place often proved instrumental in winning a victory. He also displayed an uncanny ability to evaluate his enemies, get inside their heads and so, despite his reputation for recklessness as a youth, was able to give battle on terms most favorable to his own army. He knew how to use his artillery to best effect and came up with a very well balanced combination of cannon, cavalry and infantry to bring about the best results.

Few would dispute that Maurice de Saxe was the most capable battlefield commander of the mid-Eighteenth Century and yet, through his writings, his influence was to be felt for many, many years to come. His book, “My Thoughts”, written in 1732, was considered the definitive work on how to train, organize and prepare an army for war. Of course, not all of his ideas held up in the long-term such as the attention he gave to weapons such as the plug-bayonet, which would soon be replaced by the more practical socket-bayonet and the pike which would be discarded altogether very quickly in the age of the musket. Still, his emphasis on close cooperation between the three main branches of the army, were well in advance of their time and would make his book ‘required reading’ for French officers under Napoleon. Alongside Napoleon and Jomini, Maurice de Saxe remains today one of the most influential military thinkers in the French history of warfare.
Posted by MadMonarchist at 11:40 AM