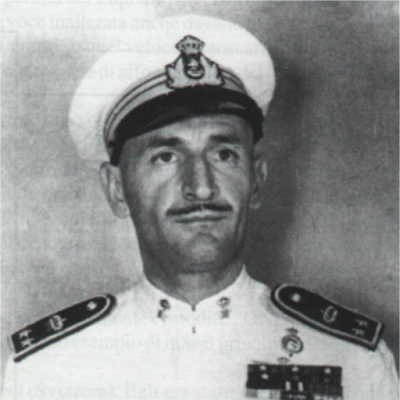 One of the most prominent Italian submarine commanders of World War II was Captain Luigi Longanesi-Cattani. Born in Bagnacavallo, in the province of Ravenna, Emilia-Romagna on May 4, 1908, he attended the naval academy at Livorno, graduated and began his career as an undersea naval officer on the submarine Marcantonio Bragadin. Later, he was posted to Italian East Africa on the submarine Benedetto Brin. He was serving as commander of the Benedetto Brin, one of the Brin-class of submarines, in Taranto when the Kingdom of Italy entered World War II. His was then the only boat of his submarine squadron, the rest being on service in the Red Sea when war broke out. He served in the Mediterranean and earned the Cross of War for Valor after successfully saving his boat from an Allied air attack. In October of 1940 he was ordered to make the perilous journey through the Straits of Gibraltar to Bordeaux, home base of the Italian submarines operating in the North Atlantic.

Longanesi-Cattani crossed Gibraltar on November 4 but, upon surfacing, was surprised by two British destroyers which immediately opened fire. Thanks to his quick thinking, Longanesi-Cattani and his boat survived and escaped but he was forced to put in at Tangiers for repairs. Earlier that summer, Tangiers had been occupied by Spanish troops and, after the Brin was joined by another submarine, the Spanish were able to shield the Italians from the British destroyers. After a period of frenzied repairs, as well as a great deal of play-acting to fool British spies, both submarines were able to slip out of Tangiers in December and arrive in Bordeaux a few days later. For this little adventure, Captain Longanesi-Cattani was awarded his first Bronze Medal for Military Valor. However, that was not his only achievement. While on route to Bordeaux, Longanesi-Cattani happened upon the British submarine HMS Tuna. The British mistook the Italian sub for one of their own and there was an exchange of signals before they realized they were in the presence of the enemy. The British sub fired one full salvo of six torpedoes followed by another of four torpedoes but, though extremely close, the Brin avoided them and fired two torpedoes of their own. These missed as well, though fire from the Italian deck gun did appear to hit the British sub, both survived the encounter.

Once arriving in Bordeaux, it took some time to repair the Brin and fully restore it to fighting shape after the ordeal it went through on the way there. Everything was finally in order for a proper war patrol in the summer of 1941 and on June 13, 1941 Longanesi-Cattani and his men participated in an attack on Allied convoy. It was a great success with the Brin, in only about fifteen minutes, sinking two merchant ships (one a Greek vessel and the other a French ship in use by the British) as well as damaging two more. For this achievement, Longanesi-Cattani was awarded the Silver Medal for Military Valor as well as the German Iron Cross second class. The commander of all German submarines and all Axis submarines in the Atlantic, Admiral Karl Doenitz met with Captain Luigi Longanesi-Cattani and the two became good friends. However, little more than a month later he was ordered to return to Italy, making the dangerous passage in front of Gibraltar again, but arriving safely in Naples with several victory pennants flying.

On October 6, 1941 Longanesi-Cattani was given a new command, the Marconi-class submarine Leonardo da Vinci, which would be the most successful Italian submarine of the war. He returned to France but was soon sent on something of a ‘refresher course’ in the latest submarine warfare tactics in what is now the Polish city of Gdynia, at the time part of Germany. Once completed, he took his boat to hunt in the waters around the Azores but soon had to turn back due to mechanical problems, even being forced to pass on attacking an Allied convoy a couple of days later. Still, his service was further recognized by promotion to lieutenant commander in December. In January of 1942, while on patrol northeast of the West Indies, Longanesi-Cattani had better luck, sinking a Brazilian ship by torpedo attack and two days later a Latvian ship with a combination of torpedoes and gunfire. Upon returning to port, he received a second Silver Medal for this.

By this time, pressure was being placed on Brazil to join the war and with Allied convoys in the North Atlantic so heavily guarded, it was correctly thought that the Brazilian shipping lanes would offer greater opportunities for the larger Axis submarines such as the Italian boats and the German Type-IX’s that had sufficient range to operate in the South Atlantic. Longanesi-Cattani was sent in and patrolled off the coast of Brazil but was later diverted to the African coast. On June 2, 1942 he sank a large schooner with his deck gun, the Reine Marie Stuart, and a few days later sank the British ship Chile with a single torpedo. On June 10 he successfully torpedoed the Dutch ship Alioth (also with gunfire which was not uncommon for Italian submarines since their torpedoes were not as effective as the German magnetic type) and later another steamer, the Clan McQuarrie. Longanesi-Cattani had become an “ace” sub skipper, sinking more than five ships and returned to port to receive another Silver Medal and the Iron Cross first class from his German ally. After a job well done, in August he was ordered back to Italy for a new assignment, his boat to be given to Gianfranco Gazzana-Priaroggia who would gain fame as Italy’s most successful submarine commander.

All in all, Captain Luigi Longanesi-Cattani had, during his participation in the Battle of the Atlantic, sunk eight Allied merchant ships for a total of 34,439 tons of Allied shipping destroyed. Once back home, he was given what seemed to have been an even more critical assignment, being attached to the elite Xth Flotilla MAS, which was rather like the special forces branch of the Italian submarine fleet. These were the men who launched attacks on ships in heavily guarded enemy ports using “human torpedoes” or mini-subs and it was intended that Longanesi-Cattani would command a special team of CB-class midget submarines in operations against the Soviets in the Black Sea. However, that assignment never came to be. Instead, he was attached to the command of the zealous Fascist and overall X Flotilla MAS commander Prince Junio Valerio Borghese, aka “the Black Prince” and was to command the submarine Murena for a special mission against an Allied pipeline that was under construction. However, before that could get underway, the entire Italian war effort was thrown into confusion by the dismissal of Mussolini by King Vittorio Emanuele III and his replacement by a new government led by Marshal of Italy Pietro Badoglio.

The military had no warning about this and Marshal Badoglio announced publicly that he would be continuing the war alongside the Germans (in reality, he immediately began trying to secretly arrange an armistice with the Allies). Longanesi-Cattani put aside his personal views and remained committed to his duty and carried on preparing his submarine for the attack on the pipeline at Gibraltar. Everything was just about in order when Marshal Badoglio announced an armistice with the Allies and ordered all Italian forces to cease hostilities. Longanesi-Cattani had been at sea performing tests when this happened and learned of it only after returning to port. Like many, he was shocked and rather bewildered by this abrupt change. He almost had to sink his own boat until the last-minute intervention of Prince Borghese had the order revoked. Many Italian soldiers, sailors and airmen were torn by this sudden turn of events. Prince Borghese gathered his men and asked who among them would stay with him to carry on the fight against the Allies alongside Germany. Most agreed and Longanesi-Cattani decided to as well but only after being assured by Borghese that this would not compromise his oath of loyalty to the King of Italy.

During the confusion of the armistice period, Longanesi-Cattani was dispatched to Florence to protect the family of Prince Aimone, nominal King of Croatia. The Prince’s wife, Princess Irene of Greece & Denmark, who was heavily pregnant and her sister-in-law Princess Anne of Orleans, Duchess of Aosta, were there. The veteran submariner was there, watching over the family in Florence, when Prince Amedeo the current Duke of Aosta was born on September 27, 1943. He was also there when, only a few days earlier, the Italian Social Republic was proclaimed, formed by Mussolini at the insistence of Hitler, and that was a deal breaker for Captain Longanesi-Cattani. He refused to break his oath of loyalty to the King of Italy, which came before all else for him, and immediately wrote to Prince Borghese informing him of this. He also wrote to the republican Secretary of the Navy, Captain Feruccio Ferrini, handing in his resignation. This was a major risk for him as he was trapped in northern Italy which had been occupied by the Germans and were taking into custody anyone who opposed the Italian Social Republic. Regardless, his loyalty to the King was all that mattered and he willingly surrendered himself to the authorities and, along with Princess Irene and Princess Anne, was sent to the concentration camp at Hirschegg near Innsbruck, Austria on July 26, 1944. 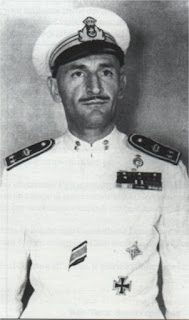 The camp was eventually liberated by American troops and, as King Umberto II of Italy had, upon going into exile after the farcical referendum, released everyone from their oath of loyalty, Captain Longanesi-Cattani returned to duty with the navy of the new Italian republic, eventually rising to the rank of Squadron Admiral. His only other prominent part in a public issue was sitting on the commission of inquiry into the former commander of the BETASOM Italian submarine base in Bordeaux during the war, Captain Enzo Grossi, where Longanesi-Cattani had served. Captain Grossi was ultimately cleared. After a lifetime of service to his country, including becoming one of the top Italian submarine commanders of World War II and earning four Silver Medals, two Bronze Medals, the War Cross from the King of Italy and the first and second classes of the Iron Cross from Germany, Admiral Luigi Longanesi-Cattani died in Rome on March 12, 1991.
Posted by MadMonarchist at 5:20 PM