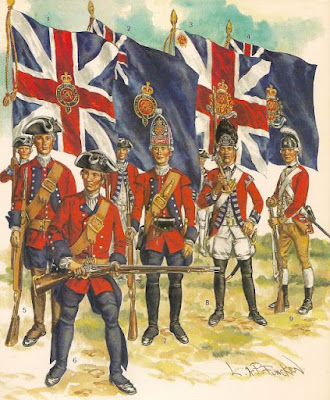 During the struggle between France and Britain for control of North America, in the conflict known to Americans as the French and Indian War, the British forces had met with some early disasters that made it clear that some new military units with special skills would be needed to fight this war. A large British force under General Edward Braddock had been wiped out fighting the traditional way, as if they were on a European battlefield, by a much smaller force of French and Indians who used the wooded terrain to their advantage. After word of this humiliation reached London, King George II gave royal assent to the formation of a new regiment for the British army on Christmas Day, 1755. This was the birthday of the 60th Royal American Regiment (originally the 62nd, it was renumbered a few years later) which was to include four battalions, made up of many foreign soldiers with woodland experience, provided they were Protestant of course (so as not to have any risk of sympathy with the Catholic French), for service in North America.

John Campbell, 4th Earl of Loudoun, who was then commander-in-chief of British forces in North America and Governor-General of Virginia, was appointed to the mostly ceremonial post of colonel-in-chief of the new regiment. The idea for the regiment originated with a Swiss soldier and comrade of the Duke of Cumberland named Colonel Jacques Prevost. It was he who suggested that a special unit of men expert at fighting in heavily wooded areas was what was needed in waging war in the wilds of North America. The ranks were to include a large percentage of Germans, some from the German states, others recruited from German-Americans in the colonies. To fully fill out the four battalions, large numbers of Irish were later recruited. These were men who had been rejected for service in other regiments of the Irish establishment for the British army, a point to remember. The battalions formed up in New York but as far as leadership went, this was a regiment ‘for’ America and not ‘of’ America to be sure. For the first time ever, the British army also commissioned a number of foreign officers to lead a regular regiment. Out of 101 commissioned officers of the regiment, alongside English, Irish and Scots about half were foreigners, German and Swiss with some Dutch, though none could rise above the rank of lieutenant colonel so as to ensure that a proper Briton was always in command.

The principle behind the Royal American Regiment was not a unique one. Having a force that could fight the French-backed Indians using Indian tactics was also the idea behind the famous Rogers’ Rangers from which the current special forces of the U.S. Army claims descent. However, the Rangers were irregular troops and the very nature of their job and how they carried it out ensured that they were a rough, rowdy and undisciplined bunch. With the Royal American Regiment it was hoped that the British army could have a unit that combined some of the backwoods fighting skills of the Rangers with the discipline and reliability of British regulars. Given its background and composition, some have referred to it as a mixture of a colonial regiment and a foreign legion. They were dressed, originally, like any other British regiment save for the fact that they had no lace on their coats, just plain blue turn backs (blue being the traditional color of “royal” regiments). However, they would ultimately look very different in the field than what their original appearance was. 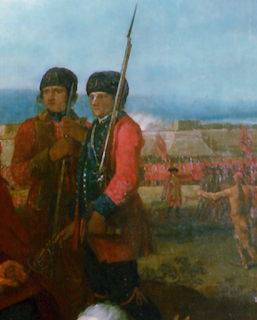 Colonel Prevost had suggested a short jacket, Indian leggings, a leather cap he called a ‘bonnet l’Allemand’ and even a simple kilt as the sort of outfit best suited to wilderness warfare in America. There is no evidence that they ever wore kilts but much of the rest was eventually how the Royal Americans ended up. The traditional red coat was cut a bit shorter, Indian-style leather leggings did tend to replace the regulation black cloth leggings they were issued and many even took to wearing Indian moccasins in place of their standard shoes. There is some evidence that leather caps such as Prevost described were worn but others wore the usual cocked hat of the period, though after some time in the field these were sometimes cut down to more closely resemble the typical leather cap often worn by light infantry. Among the other regiments of the British army, the Royal Americans had a distinctively ‘frontier’ look to them, dressed more practically for serious fighting in the woods than for parade-ground panache. What is interesting is that this regiment of American colonists, German and Swiss soldiers of fortune and Irish rejects, proved itself to be one of the best in the British army.

One of the battalion commanders, Henri Bouquet, a Swiss, literally wrote the book on tactics that were later adopted by the whole British army and which remained standard for over a century to come. He and his fellow battalion commanders turned their diverse volunteers, many of whom had less than the best reputation, into true experts at wilderness warfare and the changes to their uniform and their habits reflected that. During the French and Indian War as it carried on, the Royal Americans at first had little opportunity to do what they were best suited for and fought in a number of battles in the traditional style. At that, however, they still did very well and they saw action at the siege of Louisbourg in 1758, the Cape Sable Campaign and the final victory at the battle of Quebec in 1759 as well as the subsequent advance of Montreal. It was at Quebec that their performance earned them the praise of the famous General James Wolfe, from whom they took their official regimental motto “Celer et Audax” (Swift and Bold). However, later, during Pontiac’s Rebellion, they were able to prove themselves as experts at frontier fighting particularly as Bouquet led them to victory at the battle of Bushy Run which culminated in a fearsome charge by the Royal Americans that is still remembered.

This victory, won by a few hundred Scots highlanders and the Royal Americans, enabled Bouquet to lift the siege of Fort Pitt and was the turning point in putting down the rebellion. Afterwards, the regiment was moved back to Europe though one battalion always remained on station. After the American War for Independence, this was, of course, in Canada where it remained until 1824. However, the 60th Royal Americans saw action on other battlefields far from where they had intended to serve. During the Napoleonic era they served with distinction in the Peninsular War. A fifth battalion was raised and armed with the superb Baker rifle, acquitting itself very well against the French. The other, musket-armed battalions served in other parts of Europe and around the world in defense of the British Empire such as in the islands of the West Indies. The success of the rifle battalion, however, gained them the most notoriety and more were recruited and they served alongside other famous units like the 95th Rifles and the King’s German Legion during the fierce fighting in Spain. Another battalion was even raised specifically for service in the War of 1812, once again, in North America. 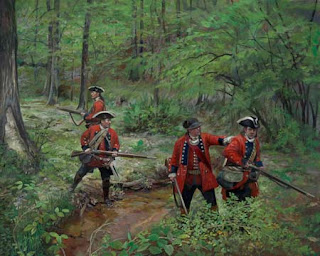 Because of the success of the rifle battalions in the struggle against Napoleon, in 1815 their name was changed to the Duke of York’s Own Rifle Corps and, in 1830, to the King’s Royal Rifle Corps. During the glory days of the British Empire the KRRC served in campaigns all over the world in Egypt, Afghanistan, India, Burma, China, South Africa and Canada. They played a critical part in the Boer War, was heavily expanded in World War I and fought on the western, Greek and Italian fronts. In World War II they were part of the BEF sent to France and elements played a key part in holding off the Germans from wiping out the British during the Dunkirk evacuation. They later fought in Greece, the island of Crete and took part in the doomed Operation Market Garden in The Netherlands after the Allies fought their way back into western Europe. In 1958 they had yet another name change and in recent decades there have been further name changes, renumbering of units and the combination of units as the British army had been continuously downsized. Today, the tradition of the Royal American Regiment technically is held by the 2nd Battalion of “The Rifles”, a unit that was formed from ‘merging’ several regiments.

To the extent that the old 60th Royal Americans are remembered, I am glad that this is the case and one can see traces of their influence in units of the Canadian army still. However, the habit of merging numerous regiments never passed muster with me. One unit simply cannot truly embody and carry on the traditions of so many others and it seems to be a way for politicians to abolish old and glorious regiments without having to admit that they have, for all intents and purposes, been abolished. The Royal Americans, later the King’s Royal Rifle Corps, is certainly not the only British military unit to suffer this fate, nor was it the last. It seems a shame after so long and so valorous a record of service to Queen and Country but, alas, recent British governments have had other, higher, priorities than national defense. Britons once had to choose between a welfare state and an empire and they chose the welfare state. Since then, the choice seems to have been between maintaining that state and having a military and, unfortunately in my view, the welfare state has been chosen yet again.
Posted by MadMonarchist at 3:05 AM