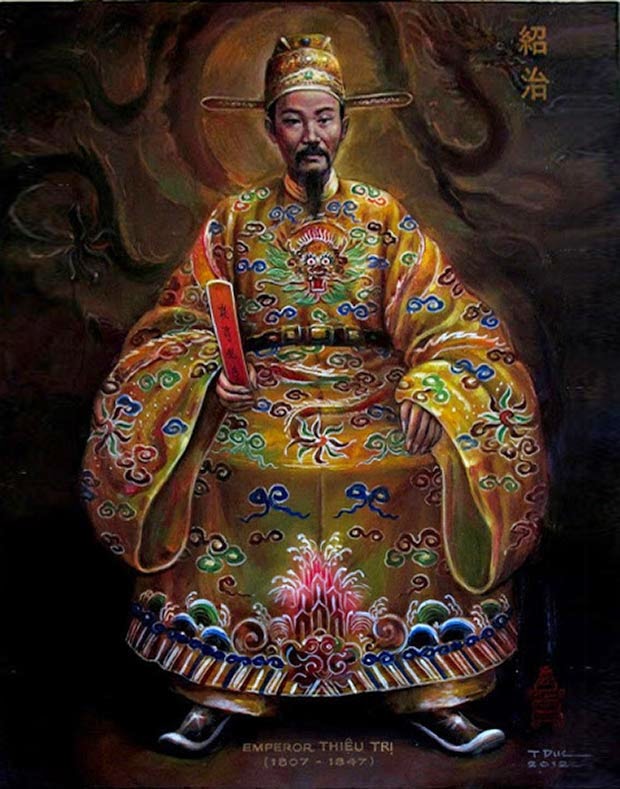 As the son and heir of Emperor Minh Mang, Thieu Tri had a tough act to follow. Vietnam had achieved its peak in size and influence but the “Great South” stood precariously on this historical apex. The French were becoming increasingly interested in the region and the slightest mistake could upset the balance and plunge the country into a struggle it could not hope to win. However, when Prince Nguyen Mien Tong came to the throne in 1841, taking the era name of Thieu Tri, this looming threat was not outwardly apparent. The reign of his father had not been free of trouble by any means but it had been great and glorious and it seemed that all Emperor Thieu Tri had to do was follow in his footsteps, steering a steady course and the power and prestige of the Nguyen Dynasty would continue. The country seemed to be in good hands as Emperor Thieu Tri was similar to his illustrious father in many ways. He was highly educated, very intelligent, devoted to traditional Confucian values, a lover of nature, artistic and intellectually curious. He was open to learning from the west but like his father was also determined to keep western influence out of Vietnam and maintain the close relationship with the Great Qing Empire.

In the early days of his reign, everything appeared tranquil. There were no major problems and the reign of the Nguyen Dynasty seemed permanent and unassailable. When it came to foreign affairs, the situation called for concern but not alarm. In China, the Qing Empire was being hard pressed by the British in the First Opium War but they were holding their own at that point and there seemed no danger of this touching Vietnam. Best of all, in Paris King Louis Philippe of the French exhibited no desire for imperial expansion into southeast Asia. But Emperor Thieu Tri faced two very real threats that would soon come together to provoke a major crisis that would change the course of his dynasty and the entire Indochina region forever. The first problem was the persistence of Christianity in the country. Despite the efforts of his predecessor to discourage the new religion, Catholic missionaries, mostly French and Spanish, continued to come to Vietnam and win converts. And, just like before, they did not always restrict themselves to the spiritual sphere but were often complicit in minor peasant rebellions, sometimes even encouraging them because the Emperor was distrustful of Christianity. Naturally, such actions only reaffirmed the belief at the imperial court in Hue that Christianity was a threat to the established order.

On orders from Emperor Thieu Tri, continuing policies already in place, Nguyen officials punished Christians and arrested Catholic missionaries on the grounds that they were spreading “false” and “seditious” beliefs which upset the Confucian hierarchy, disturbed the native gods and ran contrary to proper virtue and morality. Actually, such incidents were handled fairly mildly more often than not and Emperor Thieu Tri was no fool. He realized that if he came down too hard on the Christians that this would be used by the French as a pretext to move against his country. Anti-Christian outbursts throughout East Asia had often been prompted by the fact that European domination tended to come on the heels of those preaching the new religion and the powers-that-be did not want it gaining a foothold. So, to avoid trouble, Emperor Thieu Tri hoped to simply frighten the Catholics into staying away from Vietnam. Time and time again a missionary would be sentenced to death for spreading subversive beliefs only to have the Emperor spare his life and order him deported. Emperor Thieu Tri released many missionaries rather than put them to death but there were those who persisted in always coming back. Eventually, their cause was taken up by the second major threat Thieu Tri faced.

The most famous example of this policy was that of the French Bishop Dominique Lefebvre. In 1845 he was arrested and sentenced to death by a Vietnamese court but at the request of a French admiral, Emperor Thieu Tri intervened to have Lefebvre pardoned and released. Unfortunately, his zeal would not allow him to leave the country and ‘shake the sand from his feet’ as he departed (Matthew 10:14) and he returned to Vietnam to be arrested again in 1847 by which time the patience of Emperor Thieu Tri was running increasingly thin. A similar incident involving Lefebvre has almost sparked a major incident with the United States and the bishop was caught illegally entering the country three times.

The second threat to the reign of Thieu Tri appeared in March of 1847 and that threat was the French Navy whose officer corps tended to be very conservative and very Catholic. So far from home, they were also liable to act on their without waiting for instructions from the King in Paris or whatever government happened to be in power when they returned. The French naval forces in Southeast Asia took up the cause of the Catholic missionaries and undoubtedly many of the officers were sincere in their motives for doing this. However, it is equally true that these same officers wanted to see the expansion of French power. They were alarmed at the growing British presence in the region (China, Malaya, Burma etc) and did not want France to lose out to Britain in the colonial race in Asia.

It was two French ships under Captains Lapierre and Rigault de Genouilly who entered Vietnamese waters at Tourane on March 23. Deciding on their own to take dramatic action they issued an ultimatum; Emperor Thieu Tri was to release all foreign prisoners and reinstate religious tolerance for Catholics. Hopefully, Paris would back them up after the fact. Obviously, this was something Emperor Thieu Tri could never agree to. It would mean allowing a foreign power to dictate the laws of his country and undermine his own position. Already the more orthodox Confucianists were criticizing him for the mercy he had shown the missionaries, warning him that he was neglecting filial piety by allowing this new religion to dishonor the spirits of his ancestors. Emperor Thieu Tri, therefore, ordered his forces on the coast to be strengthened and prepare to defend themselves against attack. Neither side wished to show weakness and so the French attacked, wiping out the eight Vietnamese junks sent to oppose them with relative ease. They then proceeded to carry out a naval bombardment of the port city of Da Nang. This only made things worse, for the French in the short term and for the Vietnamese in the long-term. It had, after all, been essentially a bluff. The French attack was unauthorized by the government in Paris and they lacked the forces on hand to follow up their victory. Meanwhile, it confirmed to Emperor Thieu Tri that the conservatives at court had been right all along and that drastic measures had to be taken to eradicate all foreign influence in Vietnam.

In a fit of rage, Emperor Thieu Tri issued an imperial decree ordering the massacre of all westerners in Vietnam without exception. Thankfully, a bloodbath was averted by the cooler heads among the mandarins who simply failed to carry out the order, knowing full well that such action would only guarantee that France would launch an all-out war against them in retaliation. It may have been that all of this storm and stress was too much for the delicate, intellectual monarch and Emperor Thieu Tri died only a few months later on November 4, 1847, leaving the throne to his son Prince Nguyen Hong Nham.
Posted by MadMonarchist at 12:42 AM