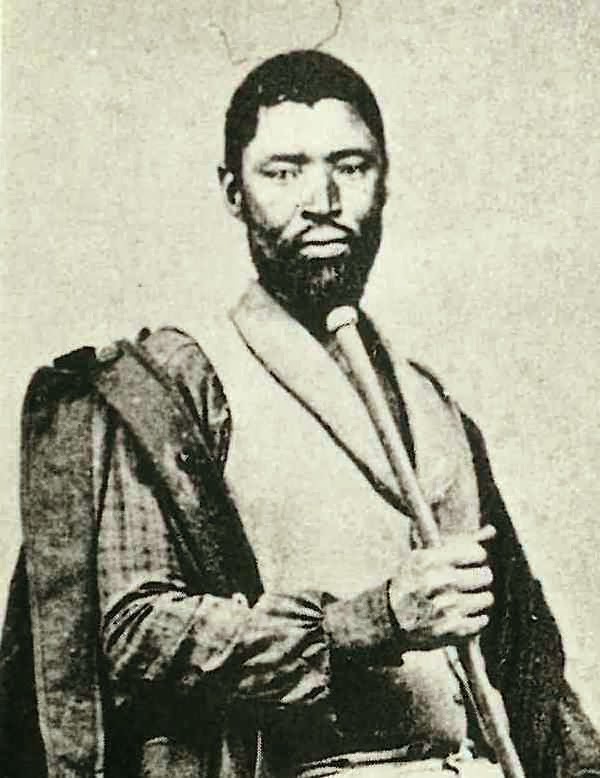 Although he is little known today outside of South Africa, Mgolombane Sandile, Chief of the Gaikas and High Chief of the Rharhabe tribe, was a major figure in Nineteenth Century South Africa and one of the most dynamic and successful leaders in the native resistance to European colonization. He was born at Burns Hill sometime in 1820 into the Gaikas or Ngqika clan of the Rharhabe tribe of the Xhosa nation of southern Africa. Not long after, his father died in 1829 and Mgolombane Sandile succeeded to the throne of the Rharhabe, the western Xhosa, with his brother acting as regent until 1872. Nonetheless, as king, he was soon presiding over a people at war. This was not at all uncommon as the Xhosa had been in conflict, intermittently, with European settlers in South Africa since around 1779. The first three wars were fought against the Dutch or the increasingly distinct Boers, and then against the British after Great Britain seized control of the Dutch colonies in South Africa during the Napoleonic Wars. Usually the reason for these wars was disputes over farmland, pasturage and so on.

In 1846 the seventh war broke out. A drought had driven many Xhosa to launch raids across the border to steal cattle. Tensions increased because of this and a relatively minor dispute over the return of a suspected murder prompted hostilities to resume. Sandile refused to turn the man over and soon came under attack by British troops, colonial forces and Boer commandos. Sandile proved a naturally talented commander, stalling the British advance by a quick strike at their vulnerable wagon train, capturing many British supplies and forcing them to retreat. He brought overwhelming numbers to bear and forced the British to fall back to Ft Peddie where they successfully held off his attacks. However, the British were hard pressed and the worsening drought was being felt by both sides. Boer commandos were summoned to come to the rescue and with their greater mobility and knowledge of the country they were able to win a number of victories, eventually fighting into the heart of Xhosa territory, threatening the village of King Sarhili, the top Xhosa ruler and persuading him to sign a peace treaty.

However, even in those days, relations between the British and the Boers were not always ideal and soon the two sides fell out with the Boers abandoning the British to their fate. By that time, starvation and fever were taking a dreadful toll on both sides. Sandile was in a desperate position but still gained great fame as he evaded all the British patrols sent to capture him as both sides, sick and exhausted, launched small but brutal raids against each other. Finally, a peace was negotiated and Sandile was taken prisoner but only for a short time. Hostilities ceased and more Xhosa territory was annexed by the British. Chief Sandile had lost his first war but had gained great fame nonetheless for his daring attacks and dogged determination. His people were determined that there would be yet another war in which they would make good their loss and take revenge on the British. This idea was fostered when a new prophet appeared, full of prophecies of a Xhosa victory and promises that his magic would protect them from British bullets. In 1850 the local British governor, alarmed at this turn of events, called several chiefs together at Ft Cox with the aim of silencing the prophet. However, Chief Sandile did not answer the summons and so the British governor declared him deposed and sent troops to arrest him. They were ambushed by Sandile’s warriors and forced to make a hasty retreat back to the fort.

As Chief Sandile and his men advanced into British territory they were joined by many other natives of various groups who rose up in rebellion, capturing several villages and destroying a British outpost. However, when they came up against British troops in protected forts, it was a different matter and at Forts White, Hare and Beaufort the Africans were repulsed with heavy losses. Once again, the British called in the Boer commandos from Cape Colony and together they relieved the besieged forts and drove Sandile and his warriors back to the mountains. By 1853 the war was over but some Xhosa warriors remained, led by Sandile’s brother Maqoma, who carried out a guerilla war in the area. Raids and retaliation went on for some time. Driven to desperation, some of the Xhosa were taken in by a religious charlatan promising that if they killed their own cattle the spirits would save them and bring them greater prosperity. That didn’t happen of course and it merely strained the already modest forces of Chief Sandile by the waves of starving refugees that came pouring into his territory.

Increasing hardship caused the outbreak of the ninth war in 1877. It started out as an all-African inter-tribal brawl but soon came to involved the British as some of the tribes were allied to them. Frustrated with these continuous conflicts, the British governor was also anxious to get involved and settle matters once and for all by the total conquest and annexation of all Xhosa territory. Chief Sandile seems almost to have sensed that there was more to this situation that most realized and he was very reluctant to join the conflict which, by that time, had come to include a declaration of war against the Cape Colony itself. His older advisors were against it but his young an impetuous warriors wanted to fight. Perhaps seeing that they would be drawn into the conflict regardless of his wishes, Sandile finally agreed to go to war. Unfortunately for him, it was his last conflict as his forces were defeated by the British and their Fingo (or Mfengu) allies with Chief Sandile himself falling in battle against the Fingo on May 29, 1878. He died a few days later in the hands of his enemies and was buried alongside British soldiers. In the aftermath, the Xhosa were defeated and their territory annexed by Great Britain. Still, the name of Chief Mgolombane Sandile is still remembered in South Africa today. Although not always victorious, he is held up as an example of a determined leader who fought fiercely, again and again in defense of his land and people.
Posted by MadMonarchist at 12:10 AM