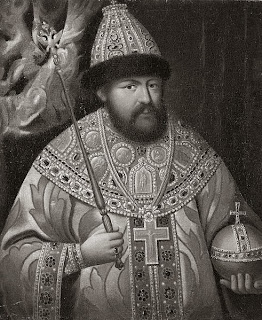 Tsar Michael I: The first Romanov to rule Russia, placed on the throne by the Church and known as a frail but pious youth in the beginning, Michael I showed he was stronger than he appeared by having to deal at the outset with Polish and Swedish armies on Russian soil and some rebellious Cossacks. He got Novgorod back from the Swedes but had to accept some losses to Poland. Under Michael I the ruined Russian economy began to recover, Orthodoxy was staunchly defended but a renewed war with Poland was undercut by an attack by the Tatars. All Russia gained was the King of Poland giving up the claim to be Tsar of Russia. His reign was no great success on every front but it was a good, solid beginning for the Romanov dynasty. He regained some territory, not all, but it was a start and his rule brought a welcome period of internal order so that the rebuilding of the country could begin after the disasters that preceded his reign. He knew a great deal of hardship in his personal life but his strong faith never wavered and the work he accomplished made it possible for his successors to succeed in areas in which he had only broken even.

Tsar Alexei I: One of my favorite Tsars, Alexei I was only 16 when he became Tsar of Russia after his father Michael in 1645. He had a cosmopolitan sort of education but he was staunchly devoted to the Russian Orthodox Church and Russian culture in the best Romanov tradition. His knowledge of music and liturgy was so great he could often be found correcting the priests when they made a mistake. He was a benevolent ruler but not a soft one. He got the Assembly of the Land to approve his war with Poland and then never called them again nor did the Duma meet very frequently. He had to raise taxes early on, which was not popular and which he was reluctant to do but saw no other option. He did also cut the pay of government workers and reduced their number. Serfdom was legally established, which some may frown at now but regulating it was an improvement over what existed before and though his war against Poland and Sweden gained some territory, it was not as much as was hoped for. Still, it provided a staging ground for the greater gains made later by Peter the Great. He worked to reform the Church which ultimately led to some unfortunate clashes with the Patriarch but the personal piety of Alexei could never be doubted. War costs hurt the economy but he also enacted reforms to the economy and trade, one of which was cutting off special trading rights of the English after the regicide of King Charles I. He died during a war against the Turks. Alexei I was a good Tsar who set the stage for great things to come and his reign was the last great flowering of the old Muscovite culture.

Tsar Feodor III: The successor of Alexei was only 14 when he came to the throne and like his father was known for his pious devotion to the Church, being well educated and well read. He reformed the army by abolishing the practice of basing rank on ancestry rather than ability and he abolished mutilation as punishment for crimes in preference to exile to Siberia. He married a Polish Orthodox wife and the Russian court began to take on a Polish style for a while but she died in 1681 along with their newborn child. The Tsar married again but he himself died not long after with no son to succeed him. His reign had not been a terribly successful one but, lasting only from 1676 to 1682 he hardly had the chance to accomplish much of anything. Still, he had shown promise and during his time on the throne had been able to do a few things of great importance by making beneficial changes to the army, the justice system, managing a land survey of central Russia and bringing some reconciliation to the Church. Had he reigned longer he may have done much more but simply never had the opportunity.

Tsar Ivan V: Poor, poor man. Ivan V was not expected to reign at all. The sudden death of Feodor III without an heir caused some confusion but the initial decision was to crown the younger son of Alexei, Peter, because of the afflictions Ivan suffered from. However, the streltsy (the militia regiments set up by Ivan IV) rose in revolt, most believe at the instigation of Alexei’s daughter Sophia who wished to rule herself with Ivan V as a mere puppet. The streltsy went on a rampage and, as a result, Ivan V and Peter I were declared joint-rulers. Sophia emerged as the real winner and she has been portrayed as the villain of the story even though she was probably nowhere near as bad as most think. A trade treaty was signed with China and Russia joined Poland in the Holy League against the Turks (along with the Austrians and Italians). Ivan V married but had a girl, making him less useful to Sophia and in the end the brothers turned on their sister. However, Ivan V was still somewhat unwell and his brother dominated the scene until his death in 1696.

Emperor Peter I: I cannot help but have some mixed feelings about Peter the Great. He is best known for “modernizing” which is to say, “westernizing” the Russian Empire and while that probably worked out for the best, as an old fashioned reactionary I cannot help but be just a little bitter about the loss of the traditional Muscovite style that prevailed before his time. Still, Peter the Great is a giant figure in Russian history and rightly so. At 6ft 7in tall he was almost a giant himself for the time he lived. He was energetic, curious, ambitious and led Russia to great accomplishments. All of which I applaud him for but I tend to think most of that could have been accomplished without totally doing away with the old styles and traditions to the extent that Peter did. One of his primary goals was a Russian presence on the Black and Baltic Seas and he took advantage of any opportunity to press forward in those areas. He was the father of the Russian navy for all intents and purposes and he toured Europe to learn all the latest advances before going home and imposing western methods and styles on Russia, whether anyone liked it or not. He thought Sweden would be easily defeated until King Charles XII cleaned his clock in 1700 but Peter responded by improving the army, their weapons and tactics and in the end he defeated a Swedish invasion of Russia, gained a foothold on the Baltic and founded the great city of St Petersburg. His reforms of the economy were well meant but often badly implemented, he didn’t get along with his son and his relations with the Church were often not any better. Still, he expanded Russia in the Baltic, the Far East and gained a foothold in northern Persia before his death in 1725.

Continued in Part II
Posted by MadMonarchist at 12:06 AM