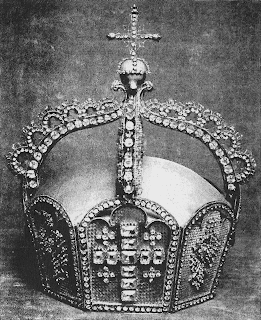 The most prominent monarchist group or movement (that I am aware of) in Germany is the group “Tradition und Leben”. It was officially registered with the German authorities in Cologne in January of 1959 but existed prior to that in an organizational stage. “Tradition und Leben” seems to be a good group and, given their platform, there are probably some who would be surprised to hear yours truly say that. However, I say it because they are being serious and realistic about the restoration of monarchy in Germany and for no other reason. In these times when the internet is such a dominant part of everyday life, one will often come across what I like to call “e-monarchists” who are often strident, childish and totally unrealistic in both their aims and methods. Oftentimes they do not really want to restore monarchies so much as they want to turn the clock back and if that were not unrealistic enough many want to go beyond that to arguing for some ideal alternate reality of their own where all of their preferences are put into effect. Trying to please or even trying to deal with these types at all is a waste of time and it makes no difference because these are, again, “e-people” who exist solely to gripe on the internet and social media. They may as well just be names on a screen -they do not exist in reality.

Unfortunately, I have to deal with these “e-people” more often than I would like doing what I do. They often pop up when the subject of German monarchy arises. Some will recoil in horror at the thought of there being a King of Prussia again, others would prefer a republican Germany to anything other than a full return to the Holy Roman Empire, still others want to re-draw the map of Germany and most of central Europe entirely and a few will quote centuries old laws by long defunct entities to assert that it is impossible to restore monarchy in Germany or that doing so could only be accomplished by warfare. In other words, these people are not being realistic, are not living in the real world. “Tradition und Leben” on the other hand, is made up of actual people, actual German monarchists and members of the former ruling families of the German states. They accept the facts of their current situation and are working from there in such a way as to have the best chance of seeing as many of the old German monarchies restored as possible. Personally, there is much about the current state of affairs in the Federal Republic of Germany and most of Europe that I find less than ideal and I wish it were not so but the situation on the ground is what it is and wishing will change nothing. The German monarchists of “Tradition und Leben” are working within the existing framework to make the case to the modern German public for the restoration of monarchy.

Readers will know what I mean by that when I say that the motto of “Tradition und Leben” is, “We crown democracy”. They are not trying to set the clock back to pre-1918 days when the King of Prussia and German Kaiser more or less had final say on everything. “Tradition und Leben” advocates converting the existing federal republic into a constitutional monarchy in which the German Kaiser presides over a parliamentary democracy. The chancellor would still be the one to run the government and, in what is probably a very strong ‘selling point’ for the modern German public, it does not presume that all the old German royal houses will be restored at once but that this should be done on a state by state basis as the people prefer. So, the federal union would exist as it does today but with some states being republican and other states being monarchist as the local population chooses. Of course, they would like to see all the old monarchies restored but this emphasis on local choice is probably a smart move and a means of advancing the monarchist cause in a non-threatening way for a public that has been taught to view monarchy in a negative light. They are also pro-European Union (which I am not but the majority of Germans is) and they are adamant that absolute nothing but peaceful means will see monarchy restored (so, yes, there can be a German monarchy again without invading Poland).

“Tradition und Leben” also (quite correctly) recognizes Prince Georg Friedrich of Prussia as the legitimate head of the House of Hohenzollern and the heir to the German throne in recognition of the tradition and history of Prussian leadership in the creation of the modern, united Germany. This is a group that has well established roots in Germany. Their “father”, so to speak, was the German monarchists who got together after World War II under the motto, “Letters for Tradition und Leben”. Their “grandfather” organization was the “Bund der Aufrechten” founded by German monarchists in Berlin in 1918 (the final days of the German Empire) and which was banned along with all other anti-republic groups in 1922 and which continued to be suppressed by the Nazi Party. Prince Oskar and Prince Eitel Friedrich of Prussia, sons of the last Kaiser, were both members. Some members of this group were also part of the now famous anti-Nazi Kreisau Circle. “Tradition und Leben” is working with the existing system, taking into account the current situation and values in Germany to advance the monarchist cause. It is hard work to be sure but the statistics show that they are having an effect. A poll taken in 2010 found 13% of respondents in favor of having a monarch reigning over Germany and by 2013 that number had risen to 19% in favor with the greatest increase being among young people and a much higher percentage at least expressing an interest in monarchy. This is all good news and shows that the effort being made by German monarchists is not being wasted. The numbers are improving and going by current trends the support for monarchy in Germany should increase rather than decrease.

“Tradition und Leben” strives to educate the public on Prussian history and organizes lectures, trips, special exhibitions and group discussions about monarchy and the monarchist tradition in all parts of Germany. They talk about the German roots of monarchy, not just from 1870 but back to the German Confederation and the Holy Roman Empire of the German People as well. Some members meet regularly to commemorate the birthdays of the Prussian King Frederick the Great and the last German Kaiser Wilhelm II. “Tradition und Leben” also makes regular pilgrimages to the grave of the last Kaiser in The Netherlands to mark the passing of the late monarch or for other occasions. They strive to show the modern German public how monarchy and democracy are compatible and that the restoration of monarchy in Germany is possible. That is an important point to make as so many people (and the aforementioned “e-monarchists” do not help this) tend to view monarchy in Germany as belonging to the past, something that cannot fit in to their world in the here and now and so simply do not give it any consideration. “Tradition und Leben” says, quoting Prince Louis Ferdinand of Prussia, that, “There is nothing impossible in politics”. We wish them all the best in their efforts even if their views and our own are not exactly in perfect alignment on every issue. Let the monarchy be restored and then we can go from there in perfecting it. Those interested or German readers who would wish to join in supporting “Tradition und Leben” can go to their website at www.pro-monarchie.de for all the details.

*Addition: Interested parties may also wish to visit http://www.aufrechte-monarchisten.de/
Posted by MadMonarchist at 12:18 AM