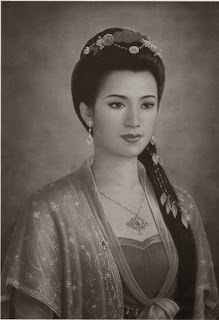 One of, if not the, most famous royal consorts in Thai history is undoubtedly Queen Suriyothai of Siam from the Ayutthaya period of Thai history. Her fame is certainly well deserved and derives from her wisdom, her courage and her devotion to both her country and her family. In the person of Sri Suriyothai the Kingdom of Thailand has a warrior-queen to match the Trung sisters of Vietnam, Isabella of Castile, Eleanor of Aquitaine or Boudica of the Celts. Sri Suriyothai displayed prudent judgment and compassion balanced with an ability to make hard decisions in hard times on the political front and, when the greatest crisis of war came, she was not afraid to strap on her armor, mount her war elephant and go charging into battle. A stupa reliquary was built for her after her death and to this day she remains one of the greatest heroines in Thai history. In 2001 she even became the star of her own biographical film, “The Legend of Suriyothai” which was the most expensive Thai film ever made up to that time and partly funded by HM Queen Sirikit. Her story is certainly one made to order for anyone enthralled by drama, intrigue, romance and the clash of arms as well as by figures truly worthy of admiration.

No documentation of the early years of Queen Suriyothai have survived to the present day. In fact, only a few lines concerning her ultimate fate at the climax of her life have been handed down to us. Exactly where or when she was born is unknown. Because of this lack of hard facts, there has been the freedom for numerous legends to grow up around this iconic royal consort. One of the most popular is that she was of minor royal rank who, despite loving another prince, was married to the future King Maha Chakkraphat. Such a story may or may not be true but, if so, it certainly underlines the immense sense of duty Queen Suriyothai felt to be so devoted to a husband who was not her first choice and who she never completely loved. If it is not true, the later events of her life would seem to provide concrete evidence of just how deeply connected she felt to her royal husband. It is also supposed, and evidence would seem to support this, that Queen Suriyothai was a very strong and independent-minded woman. Given what we do know about her, this fits perfectly with the image of her character. She was a woman who was firm in her opinions, adept at seeing to the heart of matters, strong in her convictions and sense of duty as well as being immensely courageous.

To put Queen Suriyothai in a bit of context, throughout much of this period the Kingdom of Siam or Kingdom of Ayutthaya (as it is sometimes called, after its capital city) was the dominant power in Southeast Asia. At its peak, the kings of Ayutthaya ruled over all of what is today Thailand, Laos, Cambodia, parts of southern China, northern Malaysia and a considerable slice of eastern Burma. In Vietnam the Le Dynasty was about to give way to the Mac Dynasty and was in a great deal of turmoil which left the Kingdom of Burma as the primary rival in the region to Ayutthaya. In the early 1500’s the Toungoo Dynasty was starting a period of success and expansion that would create a Burmese empire stretching across Southeast Asia. Conquest was the order of the day and Burma was rapidly becoming the most militarily powerful force in the region. The story of Queen Suriyothai also fits in quite well with other military heroines of Southeast Asia such as Trieu Au and the Trung Sisters of Vietnam who gained fame for leading wars of liberation against the occupying forces of Imperial China. Southeast Asia was somewhat distinct in this way in that there was a tradition of strong female leaders, often fighting alongside of or to avenge their husbands, it did not upset the existing Confucian social structure but was enough to bring about a change in the way strong women figures were viewed in comparison to other regions.

Sri Suriyothai showed her strength early on, before her husband came to the throne, probably saving his life. It was a chaotic time for Siam with Ayutthaya riddled with intrigue and conspiracy. Prince Thianracha (as King Maha Chakkraphat was known before taking the throne) was the uncle of the young King Yodfa. His mother, Queen Sudachan, was the real power in the country as regent and it is widely believed that she had her own son killed in order to put her lover on the throne, King Khun Worawongsathirat. Prince Thianracha was named co-regent but Sri Suriyothai suspected danger and that the Queen was setting him up to be killed as well. So, to save the true royal line, she persuaded her husband to enter a Buddhist monastery where no assassin could touch him. A palace coup by leading nobles later brought down the usurper and made Prince Thianracha the heir to the throne. When he ascended the throne as King Maha Chakkraphat, Queen Suriyothai was beside him, a woman who had always given good advice and who had probably saved his life. All of this also illustrates why Siam was in a weakened position, a position which all but invited attack by the powerful forces of a unifying Burma.

It was early in the reign of King Maha Chakkraphat in 1548 that Siam was attacked by King Tabinshwehti of Burma. This ambitious young monarch had been constantly at war since 1534 and had a long succession of victories behind him when he turned his attention toward Siam. With a large army, veteran commanders and many modern weapons purchased from Portuguese merchants, King Tabinshwehti commanded what was probably the most fearsome armed force of the time and he had little trouble sweeping aside the small Siamese garrisons that guarded the border. Upon learning of the threat, King Maha Chakkraphat ordered his forces to rally at Suphanburi, west of Ayutthaya to organize and prepare to meet the enemy. In the meantime, King Tabinshwehti and his Burmese army moved inexorably forward. The fortified city of Kanchanaburi was found unoccupied and as the Burmese marched east they easily captured the villages of Ban Thuan, Kaphan Tru and Chorakhe Sam Phan.

To speed his conquest, the King of Burma divided his army into three columns led by the future Burmese King Bayinnaung, the Viceroy of Prome and the Governor of Bassein. The city of Uthong fell followed by the villages of Don Rakhang and Nong Sarai. Finally the Burmese reached Suphanburi where the Siamese troops offered fierce and determined resistance. However, they were hopelessly outmatched and were finally forced to retreat towards Ayutthaya. The King of Burma pursued them and closed in on the capital city, encamping his army north of Ayutthaya on the Lumpli plain. The King of Siam gathered his forces and rode out to meet the enemy in what was to be, not exactly a full scale battle, but more of a probing action. Taking his sons with him, Queen Suriyothai was not going to be kept from the side of her husband. With her daughter, the two disguised themselves in male clothes and armor and, mounted on a war elephant of their own, rode with the army into the battle. The Burmese force was the column of the Viceroy of Prome and, as was custom, the Viceroy and the King of Siam charged out in front of their armies on their war elephants to fight each other in single combat.

The two men clashed but, at a critical point, the elephant of King Maha Chakkraphat panicked and bolted from the fray. The Viceroy gave chase with the King an easy target on the back of a frightened, stampeding elephant. Queen Suriyothai spotted the danger and heroically raced to the rescue. Charging her animal in between the two opposing commanders, she warded off the blow that would likely have killed her husband. However, the Burmese spear fell on her instead, cutting her shoulder and chest open. Not long after, the heroic queen died, having sacrificed herself to save the life of her King and husband. The King was able to rally his forces and fight off the Burmese long enough for an orderly withdrawal back to Ayutthaya. He would eventually die still fighting to take Siam back from Burmese control. Queen Suriyothai, however, would go down in history as one of the greatest heroes in the history of the Kingdom of Thailand for her courage, determination and self-sacrifice. Her husband built the first monument in her honor, a stupa and today there is a memorial park near the old capital of Ayutthaya featuring a large statue of the courageous Queen on her war elephant, charging into battle to save the life of the King. Her story and example provided inspiration for generations afterward and no doubt will continue to do so as long as it is told.
Posted by MadMonarchist at 12:08 AM