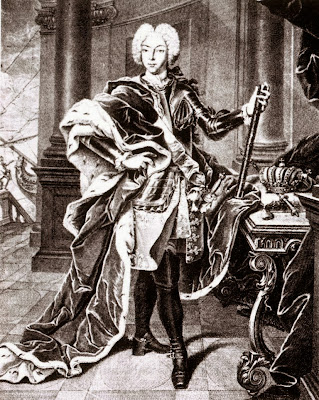 Continued from Part I

Empress Catherine I: Peter the Great did a great deal to benefit Russia and also some things that I do not think were so beneficial. I count among those leaving Russia in the hands of his common-born wife Empress Catherine I. She continued the policies of her late husband, good and bad alike but did win some popularity for lowering taxes but cutting the strength of the army. Overall, I am not a big fan of Catherine I. She was not a very upstanding woman, she encouraged corruption whereas her husband had tried to wipe it out, she tended to be dominated by those around her, who usually had self-interested motives and she only attained power thanks to a coup by the famous Preobrazhensky Guards led by Colonel Menshikov. She was gluttonous, lustful and spiteful, getting rather nasty when she came to power and started to settle old scores. Fortunately, she was not around for very long. She wanted her daughter Elizabeth to succeed her but instead, when she died in 1727 the throne passed to Peter, son of the late Tsarevich Alexei.

Emperor Peter II: Only 11-years-old when he came to the throne, Peter II, was immediately thrust into the devious world left by Catherine I with Colonel Menshikov as the power-behind-the-throne. When he tried to marry his daughter to the new Emperor the nobility rallied in support of Peter II who finally had Menshikov and his whole family deported to Siberia. The capital was moved from St Petersburg back to Moscow, the navy was downsized and it seemed that the pendulum was swinging back from the direction it had gone under the first Peter. Where Peter II would have taken Russia we will never know as he died of smallpox in 1730 on what was to be his wedding day. Very sad. Given the brevity of his reign, I cannot have very strong opinions on Peter II one way or the other but I tend to think he would have made a fine tsar and taken things back in a more traditional direction had he lived.

Empress Anna: Since Peter II left no heir, a number of candidates were sorted through before the choice fell on Anna, daughter of the late Tsar Ivan V, though it was conditional. Even then, many of the Russian nobles had a problem with it and rightly so as it turned out since she immediately repudiated the agreement she had signed and much of her reign was dominated by her German advisors and German boyfriend. Her position was weak and that made her paranoid and liable to lash out in all directions. German advisors took Russia into a war over Poland alongside Austria that achieved little. Anna was a bit of a patron of the arts but her tastes, like her values, were erratic. The same could be said for her personality and sense of humor though it tended to be cruel. Her reign was not a glorious period at all. It was not a complete disaster but it was nothing to be proud of. She reigned from 1730 to 1740 when she died of kidney failure, childless but still able to pass the throne to a fellow descendant of Ivan V.

Emperor Ivan VI: The nominal reign of the infant Ivan VI was so short and so controversial in how it came about that many do not recognize him as being worthy of inclusion among the list of Russian emperors. It is impossible to have much of an opinion of him as the poor child was never more than a political football. He came to the throne at less than 2 months old and from the start was fought over by the German officials who dominated the reign of Empress Anna. The next year, in 1741, the baby emperor was deposed by the partisans of Elizabeth, the daughter of Peter the Great, taken from his family and kept in confinement. He was kept for many years in this sad, isolated state until he was stabbed to death, most likely on the orders of Catherine the Great in 1764 to prevent anyone for attempting to rescue him and mount a rebellion to restore him to the throne. By the agreement Anna had made and then rejected, Ivan VI never should have been Tsar in the first place. In the end, he was simply a figure of pity, thrust on the throne as an infant and then punished for the rest of his life for fear of what others might do on his behalf.

Empress Elizabeth: After two rather disastrous reigns by female monarchs the Empress Elizabeth, well, doesn’t entirely break that bad trend but she at least had some positives aspects about her rule to balance out the negative ones. She was quite a contradictory person, attending divine worship regularly and often going on religious pilgrimages while also being frivolous, hedonistic, lustful and gluttonous. Still, she kept on good terms with the Church (which backed her coup to take power), boosted the influence of the nobility, got rid of some influential foreigners but not all and she saw to it that the succession was put in order. Most state business was attended to by her advisors while she focused on enjoying herself and her male favorites. Elizabeth did play an active role in foreign policy however and her forces were victorious over Sweden and she forged an alliance with Austria aimed against the Ottoman Empire and Prussia as Frederick the Great was seen as a threat to Russian influence in central Europe. Russian troops marched to the Rhine but because they took no part in the fighting, Elizabeth was left out of the peace process. She was a great patron of the arts (and something of a clothes horse) and the policies of her government did bring about a great boost to the economy. At the end of her reign she allied with France and Austria against Prussia, winning some victories but she died in 1761 before the war was finished.

To be continued in Part III...
Posted by MadMonarchist at 12:07 AM