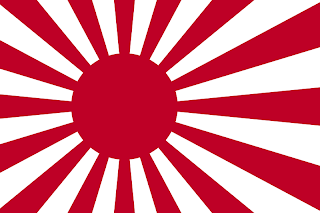 As long-time readers will know, your resident madman is a vexillologist, which is a very fancy name for folks interested in flags. Flags, like even the most ceremonial of monarchs, are powerful symbols and have the ability to arouse very strong feelings in people. I have ranted before about the misuse of monarchist flags and those who want to scrap flags with monarchist overtones, however, something else that bothers me a great deal is when a flag is unjustly criticized, especially a flag associated with an ancient and honorable monarchy. The primary example of this that most often arouses my anger today is the unjust vitriol poured out on the flag of the Japanese Maritime Self-Defense Force, the same flag as was used by the predecessor to that organization, the much more appropriately named Imperial Japanese Navy. Many refer to it as the “Rising Sun flag”, which is certainly not an official title and could be used to describe any Japanese flag, but there are many misconceptions about this flag that should be cleared up. One of which is the idea some people have that this was the flag of the Empire of Japan, which is not true of course. The white flag with the red disc in the center is and has always been the only official national flag of Japan. It was the national flag of the Empire of Japan during and before World War II and it is the national flag of the State of Japan today.

Similarly, the Japanese naval flag has never changed. The flag used by the Maritime Self-Defense Force today is the only official naval flag Japan has ever had. Unfortunately, many people, almost exclusively in the People’s Republic of China and the two Korean republics, have decided that the Japanese naval flag has militaristic, nationalistic and imperialistic connotations. This is, to put it simply, completely absurd. There is no reason that anyone today should find the Japanese naval flag offensive. All of the sore feelings surrounding the flag usually involve World War II, especially for the Chinese, or for the Koreans the era when Korea was a kingdom that was part of the Empire of Japan. Concerning this, my first thought is that there may be some mistaken identity at work here on the part of those who look for things to be offended about. After all, how much contact could there have been between the Chinese or Koreans and the Imperial Japanese Navy considering that, in those days, neither country had much of a navy at all? I can only speculate that some of these people may be confusing the flag of the Imperial Japanese Navy with that of the Imperial Japanese Army. They are quite similar, the most noticeable difference being that the Imperial Japanese Army flag had the sun disc in the center of the flag while that of the navy was slightly off center, closer to the fly.

Are all of these people really offended by the Imperial Army flag and just do not know any better? I have wondered and any confusion is probably made worse by the fact that the Japanese Ground Self-Defense Force (successor of the Imperial Japanese Army) does not use the same flag as the old IJA but uses a similar but more simplified version. In any case, it is probably a waste of time trying to attach too much thought to this process anyway, it is most likely an emotional reaction and not a natural one at that but, I suspect, one that has been purposely stirred up by Chinese and Korean politicians to serve their own ends. The worst, and most ridiculous, comment that is often made about the Japanese naval flag is that it is no different than the flag of Nazi Germany. This absurd accusation really sets my blood to boiling. After all, it is such a tired tactic at this point; when you have nothing else, bring up the Nazis in order to smear someone or something. Fortunately, this is an easy accusation to refute, at least with anyone willing to use their brain because the Nazi flag was a purely political flag that really had nothing to do with Germany or the German people. It had never been a German flag or in anyway associated with Germany prior to the arrival of the Nazis. It was the flag of the Nazi Party which they made the national flag after taking power.

The Japanese naval flag, on the other hand, was not the flag of any political party or faction and long pre-dated those who set policy immediately prior to and during the Second World War. The Japanese ensign was first adopted on October 7, 1889 before which there was no official, standard Japanese naval flag. It was the first and only flag that Japan has ever used at sea in an official capacity. There is nothing about it that was unique to the period of Japanese rule over Korea or the second Japanese war with China. It is not and never has been the flag of any faction or political party like the flag of Nazi Germany. To put it another way, no one is upset today that the flag of the Italian Republic is exactly the same as the Fascist puppet state Hitler put Mussolini in charge of in northern Italy. Few people may be aware of that because they are likely more familiar with the military flag that had an eagle and fasces on it but the national flag was a plain, green-white-red tricolor just like the flag of the Italian Republic today. Yet, no one says it is a Fascist flag because some probably know the Fascist flag was just a black flag with the fasces on it and more likely just realize that green-white-red are the Italian national colors and always have been and all they symbolize is Italy as they did long before Mussolini was ever born. In the same way, Japan has always been known as “The Land of the Rising Sun” and the image of the rising sun has always been a symbol of Japan.

What worries me the most about these (rather childish) antics is that things could go much farther. The Japanese ensign represents nothing more than Japan or more specifically the Japanese navy and there is no more reason for the Chinese or Korean republics to hate that flag any more or less than the national flag of Japan, the Hinomaru. So, if the haters of today succeed in suppressing the version of the Japanese flag they dislike so much; what is to stop them from suppressing the national flag of Japan altogether? Already in Japan today there is so much concern about appearing too proud or too nationalistic or upsetting their extremely sensitive republican neighbors that the national flag is not widely displayed. Some leftists even objected to and opposed the law passed in 1999 to again officially designate the traditional flag as the legal national flag of Japan. Some schools object to displaying the flag just as some have said that the national anthem, a song honoring the Emperor, be abolished and replaced because they want to replace everything that existed in the days of the original Empire of Japan. It is a dangerous road to be on that, if accepted, can lead in only one direction which, make no mistake about it, would include the abolition of the monarchy itself -which would mean the end of Japan entirely, plain and simple. 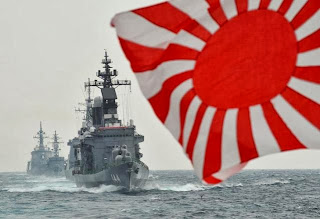 All loyal Japanese should stand together in supporting all national symbols, be it the naval flag, the national flag, the army flag or the national anthem. Furthermore, all monarchists around the world should stand with the Japanese in defense of the “Rising Sun flag” just as we should all stand together anytime a symbol of monarchy is under threat, misused or attacked. Just because China and North Korea abandoned their traditional symbols (South Korea kept basically the same flag they have always had, they just need to restore the monarchy that created it) and just because self-hating leftists in Japan have personal issues, it is no reason to allow them to force a change on the majority of faithful and upright people.

The Rising Sun flag -long may it fly.
Posted by MadMonarchist at 12:15 AM