My Favorite Swedish Kings (House of Vasa to 1720) 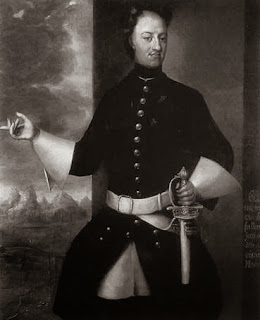 I - King Sigismund: King Sigismund I of Sweden and Sigismund III of the Polish-Lithuanian Commonwealth was elected King of Poland and Grand Duke of Lithuania in 1587 and is probably better known for his rule over those lands than Sweden. Born to parents being held prisoner by the Protestant King Eric XIV, Sigismund was raised in the old religion and would go on to become one of the great Catholic champions of Europe. Inheriting the claim of his father to the Swedish throne, regaining control of Sweden was a lifelong goal for him. Promising to respect the Lutheran Church there he was finally crowned King of Sweden in 1594. A strong supporter of the Catholic (Counter) Reformation, this made many Swedes nervous, especially as he supported the Jesuit order and stamped out heresy in Poland. He fought Russia, his troops even taking Moscow for a time and he worked to strengthen the monarchy and made Poland the dominant power in eastern Europe. He was a man of great principles, strength and determination, a devout man but never a fanatical one who managed to make himself master of north and east Europe.

II - King Gustavus Adolphus: Contrary to Sigismund I, Gustavus Adolphus was a devout Lutheran and became known as the Protestant champion of Europe for his part in the devastating Thirty Years War in Germany. Undoubtedly one of the greatest kings in Swedish history, Gustav II Adolph came to the throne in 1611 and soon established himself as one of the greatest military minds in history. He was the first to integrate infantry, cavalry and artillery on the battlefield and became known as the “Father of Modern Warfare”. He also took care to have a disciplined and virtuous army which, the facts speak for themselves, made the Swedish army an even more effective force on the battlefield. He won control of the Baltic from Poland and made Sweden the dominant power in northern Europe. More a general than a statesman, knew his own limitations and appointed talented men to oversee the government while he fought the wars. A brilliant commander, known as the “Lion of the North” it was the French who brought him in to stave off a Hapsburg victory in the Thirty Years War and though he died in the field, there is little doubt the Catholic forces would have been victorious were it not for the genius of Gustavus Adolphus.

III - Queen Christina: The daughter of Gustavus Adolphus, Queen Christina succeeded to the Swedish throne in 1632 as “King” which was just as well as her father had raised her as a boy anyway. A great deal of nonsense and, frankly, slander has been written about Queen Christina, however, there was a great deal to admire about her. She was extremely intelligent, curious, had a real thirst for knowledge and was not afraid to go her own way and do what she thought was right. She is most famous, ironically enough for the daughter of the savior of Protestantism in Europe, for abdicating the Swedish throne in order to follow her convictions and convert to Catholicism, which she did in 1654. Her conversion was one of the head more than the heart and she took great care in preparing for the abdication so that the transfer of power would go smoothly. She was a woman of courage, consideration and strong opinions. It was also during her reign that Sweden became a colonial empire, establishing (with Finland) an enclave in North America centered on Fort Christina.

IV - King Charles XII: Probably my favorite Swedish king, Charles XII came to the throne in 1697 and, in time, would become known as “the Last Viking”. Like Gustavus Adolphus before him, King Charles XII would go down in history as one of the great warrior kings of all time and one of the most influential military commanders ever. In many ways he was the embodiment of the dictum of the great Frederick, “l’audace, l’audace, toujours l’audace”. Most of his reign was dominated by the Great Northern War when Denmark, Norway, Poland, Lithuania, Saxony and Russia all decided to gang up on Sweden only to have King Charles XII put a royal Swedish smack-down on the lot of them. He not only held them off, but struck back and won victory upon victory until only the Russians were left standing. Thinking sooner was better than later, this King of Sweden looked over at the Russian Empire of Peter the Great and said to himself, “I think I can take’em!” He didn’t of course, but it was courage and audacity such as has seldom ever been seen. Sadly, but appropriately enough, he too died in the field while on campaign.

V - King Gustav III: Coming to the throne in 1771, I dislike the “Enlightened” tastes of this monarch but greatly admire the “despot” in him. After some period of hardship, he restored Sweden as a militarily significant power even though his efforts to expand Swedish territory came to nothing. Still, he was a strong monarch with a clear mind toward a well-ordered society. In something of a ‘royal coup’ he took over the government and restored the absolute monarchy in Sweden. Far from bringing about backward stagnation, King Gustav III ordered religious toleration, economic freedom and abolished torture and capital punishment -hardly what most would think of as the actions of a royal autocrat. He did, however, put a muzzle on the media which was probably for the best anyway. Given some of his ideas, many at the time amongst the crowned heads of Europe might have thought him to be some sort of radical progressive, however, the best thing about Gustav III was that he was a monarchists’ monarch. Shocked and infuriated by the French Revolution, he tried to form an alliance of monarchies to wipe out revolutionary republicanism at the outset; nip it in the bud you might say. Sadly, he was assassinated in a plot by parliament to regain power but, God bless him, he lingered just long enough to thwart them.
Posted by MadMonarchist at 12:05 AM