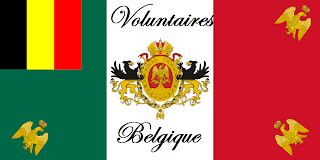 When Maximilian and Carlota became the Emperor and Empress of Mexico the governments of Austria and Belgium were officially neutral in the ongoing conflict between the monarchists and republicans. However, they certainly worried about the young couple and both countries allowed the formation of volunteer units to go to Mexico to aid the Imperial couple. King Leopold I of the Belgians, who had been very hopeful about the whole enterprise (himself a transplanted monarch who succeeded very well), authorized the formation of the Corps of Belgian Volunteers in Mexico, often referred to as the Belgian Legion.

The Belgian Legion consisted of two battalions, one of grenadiers and one of voltigeurs numbering in all about 1,600 men. They wore smart blue uniforms decorated with red for the grenadiers, green for the voltigeurs and white for musicians. The grenadiers were named the ’Empress’ Battalion and the voltigeurs the ’King of the Belgians’ Battalion. Women also came along to serve as vivandières, assisting the soldiers in any way they could. The unit was commanded by Lieutenant Colonel Alfred Baron Van der Smissen who had gained considerable experience with the French army fighting guerilla rebels in Algeria, North Africa. They were quite a sight when they arrived in their tall hats and braided jackets and calling themselves, “Les Gardes de l’Imperatrice”. Most of them were very young, late teens to early 20’s, and had never heard a shot fired in anger in their lives. Empress Carlota reviewed her countrymen at the National Palace and always took a special interest in them.

However, there was more opposition than they had been led to believe and not long after arriving the French rushed them forward and threw them into combat. The French Marshal Bazaine had been fighting to suppress the Juaristas (republican rebels) in Oaxaca and was in dire need of additional troops to free up French forces in other areas. The Belgians left Mexico City in late March of 1865 and went to the state of Michoacan to reinforce the 81st French regiment. When word came that the republican General Corona Regules was advancing on the state capital of Morelia with 3,000 men, Lt. Colonel Van der Smissen was ordered to dispatch 300 of his Belgian troops to the village of Tacambaro to face the threat.

Major Emile Tigdal was placed in command for the hopeless fight. Surrounded and attacked on April 11, in spite of their youth and inexperience they fought with heroic tenacity until only 190 of the original 300 were left. Adding to the shock of this disaster was the fact that one of the casualties was Captain Ernest Chazal, son of the Belgian War Minister. Perhaps to compensate for their own brutality, the republicans long claimed that the Belgians had taken the wife of General Regules hostage when they came to Tacambaro. However, recent research done by more honest Mexican historians has revealed that, on the contrary, Senora Regules had herself gone to the Belgians for protection at that contemporaries at the time commented on the gallant behavior of the Belgian troops whether dealing with people sympathetic to the revolution or the empire. Nonetheless, the tragic loss of so many of the Belgian Legion caused an uproar from Mexico City to Brussels.

Colonel Van der Smissen, who had been in Morelia at the time, openly accused Colonel de Potiers, the French commanding officer of the area, of criminal negligence and gross incompetence. Marshal Bazaine had to step in to stop the men from having a duel. Empress Carlota herself gave the French commander a ‘dressing down’ for having sent such a small handful of her countrymen into the face of certain death. In her writing she described the battle as “a catastrophe -like an earthquake” and said that, “It haunts me day and night”. She also sent 10,000 francs to ease the suffering of those of her countrymen who had been taken prisoner. Public opinion in Belgium was also outraged which was not helped by the fact that many in the French army looked down on the Belgians and newspapers accused the French command of using their volunteers as cannon-fodder to spare the lives of their own men.

Nonetheless, honor was restored when, several weeks later, Colonel Van der Smissen led his remaining Belgian troops along with 600 French zouaves and a few thousand Mexican Imperial troops from Morelia to retake Tacambaro and avenge the slaughter of his countrymen. As 1866 passed the situation worsened for the Mexican Empire, particularly on the northern border following the disastrous battle of Santa Gertrudis on July 8 which was followed by imperial forces abandoning Matamoros. The situation became so bad with the French on their way out, the treasury sucked dry and Juaristas gaining momentum that a northern post garrisoned by Belgian troops mutinied and other imperial forces had to be rushed in to restore order. Morale was obviously running very low. By the end of the year the Belgian Legion was disbanded and most of the troops went home rather than join the doomed Mexican Imperial Army, unfortunate but understandable given how they had been treated thus far and the fact that the French had broken the treaty they had signed previously with Maximilian and were leaving him and their beloved Carlota to their fate.

Some were determined to fight on to the last and none more than Colonel Van der Smissen who made a daring proposal to Emperor Maximilian. With the Republican Army of the North advancing south toward Mexico City promising destruction to the empire, the Belgian colonel proposed forming a special corps to advance north to meet them. In the vanguard would be an Austro-Belgian brigade under his command, some French Foreign Legion battalions would be included and some select Mexican troops under Colonel Miguel Lopez with the famous Indian General Tomas Mejia as chief of staff. Maximilian liked the idea but it was more of a heroic day dream than a workable plan and nothing came of it. The Austrians would likely have objected to being commanded by a Belgian colonel, the French were not likely to provide any assistance and by the end of the war Colonel Miguel Lopez would prove to be the least reliable officer in the Mexican army. However, it shows how much zeal the Belgian volunteers had who came to Mexico to protect “their Carlota”. 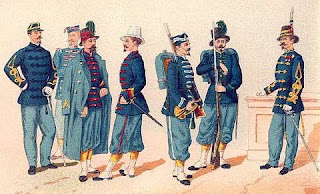 In all, less than half of the boys who joined the legion for service in Mexico survived to return to Belgium, though a few did remain to fight on until the bitter end. When Empress Carlota died in Belgium in 1927 a small corporal’s guard, the only survivors left, of her beloved guard turned out to carry her coffin to her final resting place. Their tour of duty in the ill-fated Mexican Empire had certainly shown them the extreme highs and lows of military service; grand pageantry, parades and dances, defeat, massacre, victory, triumph and hardship. Their most famous battle was, sadly, a defeat but one in which they acquitted themselves like heroes, despite being inexperienced and vastly outnumbered they fought like lions, taking a huge toll on the enemy and holding out to the very end. Their courage was marvelous and there were other victories in which they proved their worth well. Although still remembered by some, their story deserves to be more widely known and their valor, and the noble cause for which they fought, should be remembered.
Posted by MadMonarchist at 1:08 AM