On the Subject of Saudi Arabia 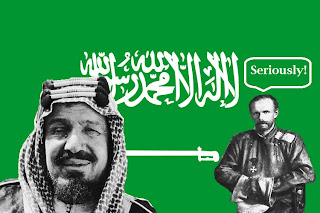 Yesterday was the national holiday of the Kingdom of Saudi Arabia, marking the unification of the country in 1932. What does this especially matter to me for? Well, these days, tell someone you are a monarchist and they will ask you about Saudi Arabia. After all, monarchies like Britain, Holland, Sweden or Norway are pretty tame but Saudi Arabia is known all over the world as an absolute monarchy and to many the image of the worst sort of state imaginable. This, of course, is not true. There are a number of monarchies in the world that are absolute, not just Saudi Arabia, and while they may not fit the modern standard of a liberal democracy they are surely not the worst out there. Many refer to Saudi Arabia as a dictatorship. While it is true that one person, the King, is ultimately in charge of everything, I would defy anyone to say the state of the people of Saudi Arabia is anywhere even close to being as horrible as that of North Korea. In spite of their laws, brutal by western standards, they have nowhere near the blood on their hands as our “good friends” the communist Chinese. So, let us try to keep a little bit of perspective on this issue.

I will state up front that there is a great deal I do not like about Saudi Arabia, a great deal I find distasteful and a great deal I disapprove of. My reasons involve not only the actions of the country today, their policies and so on, but going right back to the founding of the current kingdom by the Saud dynasty. However, for all of the terrible things that go on there (again, by western standards and even in my opinion) I sometimes feel there is a tendency to ‘pile on’ Saudi Arabia. Say what you will of the country, they do not pretend to be something they are not. Saudi Arabia is an absolute monarchy, proudly so, with Islam as the official religion and Islamic law is the law of the land. Even the national motto is the Shahada (“there is no god but Allah and Mohammad is His Prophet”). If you are not Muslim, you are generally neither wanted nor welcome. For this, many westerners condemn Saudi Arabia for being so intolerant but expecting western countries to tolerate them.

In this case, again, I think people are too hard on Saudi Arabia. They are, after all, living as they always have. They did not first demand tolerance from the West, it was the West that offered it. It is not the fault of Saudi Arabia that western nations have largely abandoned their own religion and, in most countries, emphatically stated in law that they have no religion. Western nations could be just as staunchly Christian (they once were) as Saudi Arabia is Muslim and it is not the fault of Saudi Arabia or any other country that they are not. Saudi Arabia is Muslim, officially and legally and they are not welcoming of non-Muslims and do not pretend to be anything else. Yet in the west many countries have no official religion or are not religiously exclusive and so have little room, as I see it, to complain that others do. What concern is it of anyone else what policies Saudi Arabia enacts in its own territory? If you don’t like it, don’t go there. Why do so many obsess over Saudi Arabia but not other equally less “free” or even worse countries around the world?

Where I think Saudi Arabia is to blame is in trying to play both sides of the fence and some of their actions truly baffle me. One is their funding and promotion of schools which teach a very fundamentalist brand of Islam out of which quite a few terrorists have come. What puzzles me about this, aside from any moral issues, is the fact that these people are generally not supporters of the Saudi monarchy. Osama bin Laden himself is an example. Many of those who condemn Saudi Arabia might be surprised to know that Osama bin Laden fully agrees with them. He is, of course, not upset about the lack of equal rights for women or thieves getting their hands cut off. He is upset that Saudi Arabia allows U.S. military bases on its soil, that the Saudi Royal Family is friendly with western powers and lives a rather different lifestyle quite often while abroad than when they are at home.

This, finally, is the most important reason why, despite my opposition to so much that goes on in Saudi Arabia, I remain at least a nominal supporter of the monarchy there. There is no doubt in my mind that if the House of Saud falls it will be a man like Osama bin Laden who replaces them. The change, I am convinced, would be one to make the change from Shah to Ayatollah in Iran seem miniscule in comparison. That is because the enemies of the Saudi monarchy, on the scene, do not oppose it for the same reason that the liberal-minded west does but rather because they do not view them as strict enough. It is also true that the Saudi monarchy has recently, slowly, been moving more toward the moderate direction. The King recently placed certain restrictions on religious leaders and, for the first time, appointed a woman to a government post. If this is the right policy only time will tell but despite outward appearances Saudi Arabia is far from secure. Already most of the oil industry is run by imported foreign workers while the native population to a considerable degree lives off the largesse of the Saudi monarchy. Aside from the radical religious opposition they are going to be in a very tight spot if the “green” movement succeeds in eliminating “our” dependence on oil. If that day ever comes the high standard of living in Saudi Arabia today will be gone and the people will be left with nothing but a giant sandbox and a population of angry, unemployed and religiously motivated young people. Mind your step Saudi Arabia.
Posted by MadMonarchist at 12:50 AM