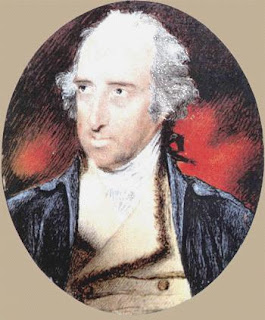 The American Revolutionary War, mostly thought of in terms of Boston, New York and that area, was actually a world war and even restricting ourselves to the North American continent saw battles as far flung as Quebec and Florida. The war also reached the western frontier, at that time the area of modern Indiana, Ohio, Illinois and Michigan. In this region the most commanding figure of the Crown forces was Henry Hamilton. During the course of the war he would become the chief antagonist of the colonial revolutionary forces and gain infamy in the colonies as “Hamilton the Hair Buyer”. Through his careful cultivation of friendship with the Native American Indians he tried to accomplish a lot with a little on a frontier far from civilization.

Henry Hamilton was born sometime around 1734, probably in Dublin, Ireland. His father was an Irish MP and young Henry was raised in County Cork before joining the British army as a captain in the 15th Foot during the French and Indian War. He served honorably at the assault on Ft Louisbourg and at the battle of Quebec. Hamilton won the friendship of Guy Carleton, Lieutenant-Governor of Canada and Carleton helped arrange a promotion for Hamilton to brigade major. Nonetheless, in 1775 Hamilton sold his army commission and decided to enter politics. That same year he was appointed Lieutenant Governor and Superintendent of Indian Affairs at Fort Detroit, Michigan. This area was had been placed under the administrative jurisdiction of Quebec which was itself one of the things the colonial agitators railed against. The American Revolutionary War had already broken out when Hamilton arrived at Ft Detroit to take command and thus, despite entering civilian life, was forced into assuming a military role.

With few British regulars on hand and a population of Indians and French Canadians who had traditionally been hostile to Great Britain, holding onto this Northwest Territory was a daunting challenge for Governor Hamilton. However, he proved himself equal to the task and immediately saw that an alliance with the American Indians was essential to his success. Britain had been initially reluctant to so treat with the Indians but it was a move that made sense. American colonists were already moving farther west and settling on Indian lands and the Indians had every reason to oppose them and support the British whose King had recognized their rights to the land and who had tried to stop further westward expansion on the part of the colonists. So, in 1777, when the war was really heating up, Governor Hamilton received instructions to encourage Indian raids on colonial settlements on the frontiers of Pennsylvania and Virginia; colonies which had already made extensive claims on Indian land.

Hamilton had already established friendly relations with the Indians and did as he was told, which quickly earned him an infamous reputation amongst the revolutionary colonials. Their propaganda portrayed the Indians (as usual) as uncivilized, bloodthirsty savages carrying out the worst atrocities against soldiers and civilians, women and children and with Governor Hamilton as the wicked British mastermind of all the devastation. As Indian raids hit settlements across Kentucky the revolutionaries gave the Governor his notorious nickname, “Hamilton the Hair Buyer”. This was the result of a much circulated story that Hamilton paid Indian warriors for every colonist scalp they brought him. This was, of course, a complete fabrication. There is no evidence Hamilton ever did such a thing, nor would it have made sense for him to do so since all scalps tend to look alike such an offer would have been just as dangerous for loyalists as it would have been to the revolutionaries.

Quite to the contrary, Governor Hamilton tried to limit civilian casualties as much as possible by sending British officers and at times Canadian militiamen along with the Indian raiding parties to ensure there were no atrocities. Of course, this could not be done all the time and methods of making war were simply different for Native Americans and many hundreds of settlers in Kentucky and western Pennsylvania were scalped and killed (American troops on punitive raids against the Indians were also quite adept at showing no mercy as well). Refugees poured in from the west and the revolutionary officials determined to take action.

So it was that the now famous expedition of Colonel George Rogers Clark was dispatched in 1778 by the Virginia authorities. Moving into what was then called the “Illinois Country” Colonel Clark and his men captured the thinly defended British outposts at Fort Sackville and Vincennes with the ultimate aim of taking Detroit. Not the sort to sit and wait to be attacked, Lt. Governor Hamilton responded by assembling his handful of British soldiers and what Indian allies he could and marching south from Ft Detroit to meet Clark and retake the lost outposts. Hamilton left on October 7, 1778 and gathered more Native American allies along the way. On December 17 he reoccupied Vincennes and then captured Ft Sackville in February of 1779. His counter-offensive had been a complete success but the wind of fortune changed direction when Clark returned. With many of his Indian braves gone Hamilton was isolated with only a tiny garrison at the fort and after a spirited attack he was forced to surrender himself and his post to Clark on February 25, 1779. 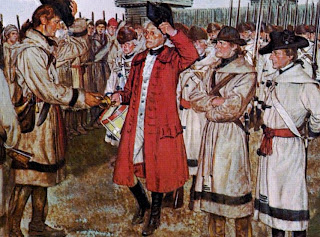 The colonial press claimed a great victory but this was true only in the limited, tactical sphere. Clark had failed in his ultimate aim of taking Ft Detroit while Hamilton had succeeded in driving out most of the American presence in the region, forcing the revolutionaries onto the defensive and forcing them to divert forces to the frontier to deal with the Indian raids. Lt. Governor Hamilton was clapped in irons and sent to Williamsburg, Virginia where many, inflamed by revolutionary propaganda, wanted him hanged as a war criminal. In the end, however, Governor Thomas Jefferson paroled Hamilton on orders from General George Washington. After being properly exchanged he was sent back to London in 1781. The following year Hamilton returned to Canada as Lt. Governor and later served as Deputy Governor of Quebec. Later he was appointed Governor of Bermuda and then Governor of Dominica. He married a woman named Elizabeth Lee with whom he had one daughter before he died on September 29, 1796 on Antigua still most remembered for his role as the primary antagonist to the revolutionaries on the western frontier.
Posted by MadMonarchist at 12:15 AM