A Note on Chinese Monarchists in the Great War Years 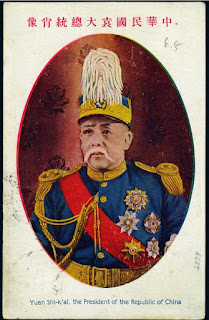 It was on this day in 1915 that General Yuan Shikai, President of the Republic of China, announced his intention to give himself a promotion from President to Emperor. This he would eventually do, though his reign as "Emperor Hongxian" would last only about three months from December 22, 1915 to March 22, 1916. To say the least, the years from 1914 to 1918, when most of the globe was focused on the events of World War I, was a time of struggle in "the Middle Kingdom" between the adherents of a republic and those of a monarchy and this incident illustrates how there were plenty of divisions in each of those camps. Yuan Shikai did have his supporters and there were those who backed his regime who argued that his new version of an Imperial China, the "Great Chinese Empire" would be ideal, just what the country needed at the time. They portrayed it as something more nationalistic and more modern than the traditional imperial system, something that would, nonetheless, maintain some of the old customs while also being strong enough to deal with the internal and external enemies that China faced. However, it obviously did not work and the fact that it would be a failed enterprise should have been fairly obvious for all to see. This action was the 'last straw', so to speak, for those on both the left and the right who had been increasingly opposed to Yuan Shikai for some time.

General Yuan Shikai had burned his bridges with both the republican and monarchist factions by this act of self-promotion. He had been the top military commander for the old empire, commanding the most powerful military forces of the late Qing Dynasty. However, when the 1911 Revolution broke out, rather than suppressing the rebels, whose ideological father was Sun Yat-sen, he made a deal with them. He would persuade the Qing Imperial court that all was lost and that they should give up power voluntarily in return for the "Articles of Favorable Treatment". In exchange for this, effectively selling out the monarchy and Qing loyalists, the republicans would make him the first President of the Republic of China. In due course, this all came about. The Empress-Dowager Longyu signed the abdication on behalf of little Puyi in 1912 and only a couple of days later Yuan Shikai became provisional President of China, being formally sworn in the following month. For many monarchists and those of and sympathetic to the Qing dynasty, Yuan Shikai took on the part of an arch-traitor who had sold out his own side for personal gain. The Qing Imperial forces had not been defeated outright after all, no rebel mobs had stormed the Forbidden City, the entire downfall of the Great Qing Empire had been noticeably anti-climactic. Many traditionalists viewed the situation as the Qing dynasty not really losing the 'Mandate of Heaven' but as having been deceived into abandoning it. 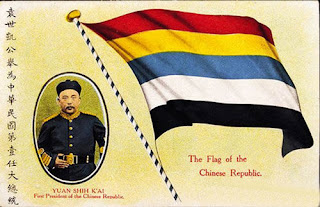 The republicans ultimately found themselves no more pleased with Yuan Shikai than the monarchists did. Immediately there were clashes over the extent of presidential powers, a leading critic of Yuan Shikai was assassinated. Elections brought in a large Kuomintang (Chinese Nationalist Party) power bloc but Yuan Shikai dissolved the assemblies, basically assumed dictatorial powers and forced Sun Yat-sen to flee the country. He fled to Japan in 1913 and immediately called for a "Second Revolution" to overthrow Yuan Shikai. It was the following year that World War I started and when it came to China in a major way with the campaign to capture the German port of Tsingtao. It had a powerful German garrison (along with a small Austro-Hungarian naval contingent) and was attacked by a much larger Allied force, predominately the Imperial Japanese Army with a token British contingent. After the Germans were ultimately forced to surrender to the Japanese, Tokyo issued a list of demands to the Chinese government concerning the recently conquered territory, which the Chinese found outrageous when they learned of them but which Yuan Shikai largely agreed to, further undermining his standing as a nationalist figure.

So it was that when, the following year, he began to make his transition from President to Emperor, the republicans who had previously supported him for getting rid of the Qing Dynasty for them had all turned against him. Traditional monarchists, likewise, had little reason to welcome this new turn of events. They had not forgotten his betrayal of the Qing, many blamed him for the entire state of affairs based on the view that he could have stopped the 1911 Revolution if he had really wanted to and now they viewed his effort to make himself monarch of a new sort of Chinese monarchy in the same way that most French royalists viewed Napoleon crowning himself emperor. They viewed him as a usurper and while they would love to see the restoration of the monarchy, they certainly saw no need for Yuan Shikai as emperor. For most of the monarchists, for those who believed in the traditional imperial system, China already had an emperor and that was the young boy being kept hidden away in the Forbidden City. Immediately, even within his own camp, things began to fall apart for Yuan Shikai. The military was divided, many of his supporters abandoned him, his sons began fighting over who would be the crown prince and most foreign governments refused to recognize his change in status, preferring to wait for things to settle down.

Before he had gone through the traditional rites of accession to the throne (which is why practically no one considers him the "last emperor" of China), Yuan Shikai could see that his 'ship of state' was sinking fast. His money dried up, the provinces began to declare against him, republican forces were gathering to oppose him and renouncing his claim to imperial status satisfied no one. He would not be an emperor or a president any more and before things could get really bad he simply dropped dead in the summer of 1916. Yet, without Yuan Shikai to oppose, the republicans had nothing to unite them and soon began feuding among themselves. The following year, 1917, a Qing Dynasty loyalist decided that the traditional monarchy should be restored. With his army, he occupied Peking and, for a few days, restored the last Manchu Emperor to the Chinese throne. That, as we know, did not last and there was to be no Emperor of China again, though the actual "last Emperor" was restored in his Manchurian homeland a few decades later thanks to Japan.

Yuan Shikai, simply had nothing really going for him. Unlike Napoleon, he had won no great battles with which to rally the country behind him. He had no 'street cred' with the republicans and most monarchists viewed him as a traitor. For the republicans, he had not triumphed over the Qing Imperial Army, he had led the Qing Imperial Army and had used a combination of warnings and promises to convince them to hand over power without a real fight. He was not a republican by natural inclination and yet he had no legitimacy as a monarchial claimant to the throne. Just as for most conservative French royalists, Napoleon would never be anything but the 'upstart Corsican usurper' there were always going to be those Manchu loyalists who would never accept him. However, while Napoleon had struck down threats to France and conquered much of Italy and won battles in Egypt before claiming the throne, Yuan Shikai had not crushed his republican rivals, defeated any foreign armies or, such as with his reaction to the Japanese, done much to revive Chinese pride and prestige. He was, mostly by his own actions, caught between two irreconcilable forces. The republicans, obviously, wanted a republic and would not have an emperor. The monarchists, on the other hand, already had an emperor and it was not Yuan Shikai.
Posted by MadMonarchist at 2:37 PM