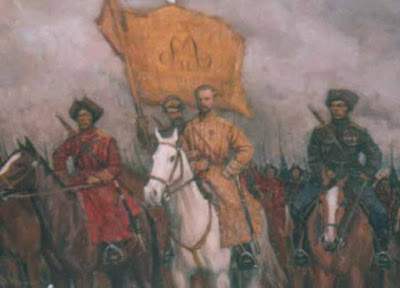 It was on this day (about) in 1885 that the mascot of this weblog, Baron Roman von Ungern-Sternberg, was born in Graz, Austria-Hungary. Every now and then, I still get some bewildered comments and questions over why I would highlight such a figure. “Wasn’t he some sort of murderous lunatic?” they will say. Certainly that is the prevailing opinion of most historians, I have no doubt. Personally, I don’t think he was all *that* bad, he was a rough character on the right side but I cannot refute every lurid tale told about him. The “Mad Baron” has long been my favorite historical character, I find his story fascinating, with just enough mystery and rumor swirling about him to leave room for the imagination to roam just a bit. It’s the same reason I don’t like people trying to prove or disprove stories about Bigfoot or the Loch Ness monster, a little mystery is good for the imagination. But why make him the mascot of this weblog? (now about to enter its 9th year at this location) 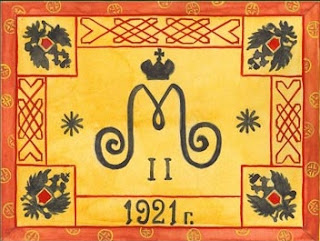 Well, I like where he was going, I like his Eurasian style, I like his priorities. I tend to agree with his choices of who to support and who to oppose. His own actions aside, he fought the reds in the Russian Civil War and restored legitimate authority in Mongolia, both of which were, in my view, the right thing to do. However, I will admit, it was partly his fearsome reputation that did prompt me to feature him prominently here. I knew that not many people know about Baron von Ungern but for those who do, he tends to be the ultimate bogeyman. Yes, before it was really a “thing”, you could say I picked the Baron as mascot because I knew it would “trigger” revolutionary radicals like no other figure could. He’s supposed to be the bad guy! No one is supposed to like him! He was terrible, he was cruel, he was totally nuts! As far as his sanity goes, all I can do is quote Pope Francis and say, “Who am I to judge?” As for the rest, I would never have tried to argue that everything he did in his behavior was totally above board. His overall goals, on the other hand, I do think were right.

What were these goals? He wanted to restore the Bogd Khan to power in Mongolia. He succeeded at that and I think that was a good thing. He wanted to see the Qing Emperor restored in China, as would I, certainly at that time. He wanted to ally with the Empire of Japan and invade Russia to destroy the Bolshevik regime and restore the Romanov dynasty to power. Again, I think that was a noble cause. He did not succeed at that, so I would not advocate repeating his actions exactly (which is a problem as many who admire the losing side often fall into the trap of insisting on repeating the actions which obviously didn’t work) but his aims were the right ones in my view. He wanted to start a massive counter-revolutionary movement that would revive traditional authority around the world and that sounds like a noble aspiration to me. For those who are new, or just unfamiliar and would like some more detailed info about Baron von Ungern, I can direct you to the following posts:

The Life of Baron von Ungern-Sternberg

How the Baron Saved Mongolia

Religion and the 'Mad Baron'

Posted by MadMonarchist at 12:54 AM