The Annexation of Hawaii 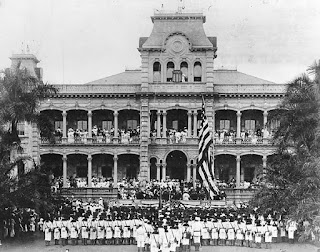 It was on this day in 1898 that the Hawaiian flag was lowered from Iolani Palace and replaced by the flag of the United States of America, signifying the transfer of sovereignty to the American government from the short-lived formality that was the Hawaiian Republic, a legal fiction which had served as a stepping stone from the former Kingdom of Hawaii to the island chain becoming a U.S. Territory. How had it all happened? It was certainly not like other examples of colonial expansion but for all of that it does serve as a more easily understood lesson to what many modern monarchies (and republics) are in danger of succumbing to. The Kingdom of Hawaii was not actually conquered by the United States, rather, it was lost due to a slow process of demographic decline, an increasingly different population not loyal to the Hawaiian Crown and finally by this new population using their power to take control of the country and make it a part of the country they had come from.

Unlike some other parts of the world, western (in this case American) forces did not come to topple a primitive and barbaric heathen people to save them from darkness and suffering. Hawaii had its own savage history to be sure, but all of that was a distant memory long before 1898. King Kamehameha the Great subdued the other chiefs of the islands, uniting them under his rule and ending the many years of sporadic warfare between the Hawaiian people. This was the start of the establishment of the Kingdom of Hawaii. In 1819 he was succeeded by his son King Kamehameha II and it was during his reign that Protestant Christian missionaries came to Hawaii from the United States. They converted the Royal Family to Christianity and this, in turn, brought an end to certain native customs and taboos which were barbaric. With the 1840 Constitution of King Kamehameha III, the Kingdom of Hawaii officially became a Protestant Christian monarchy. Catholic and even Mormon missionaries arrived later but never attracted many converts. The Kingdom of Hawaii was not a country of ignorant primitives when Americans started to arrive on its shores in growing numbers, rather it was a civilized, though simple, Christian monarchy with all of the trappings of any other well established sovereign kingdom. 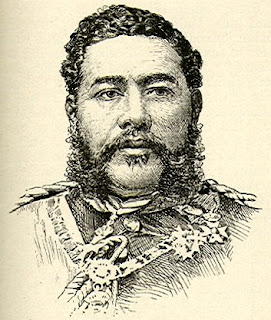 Then, more and more Americans started coming to Hawaii but the native population, previously reduced by wars and diseases brought by the first European visitors to the islands, was assured that this was a good thing. The Americans bought land from the natives, employed them and caused the economy to prosper. Members of the Royal Family married Americans and any concern that the Hawaiians were being displaced in their own country were hushed up by those who stood to benefit. To be welcoming was the order of the day and to think about the economic prosperity all of these newcomers brought with them. King Kalakaua, a jovial man, embraced this attitude and encouraged more foreign workers to come to Hawaii during his reign, which started in 1874. He signed an agreement with the United States that proved very beneficial and granted the U.S. Navy the use of Pearl Harbor for the establishment of a base and port facilities. He had big plans, encouraged his people to be educated abroad and when Britain and Germany started expanding in the Pacific, envisioned the Kingdom of Hawaii forming a Polynesian Confederation to block them. However, King Kalakaua found out that the many foreigners he had appointed to high office were more loyal to their own people than they were to him.

In 1887, fearing the King was about to take more direct control of matters, the Americans in Hawaii staged a sort of armed uprising and forced King Kalakaua to sign a new constitution, thereafter known as the "Bayonet Constitution" which stripped the monarch of almost all of his powers. The Kingdom of Hawaii was still to be democratic of course but the franchise was restricted to those who owned land and, by this time, most of the land was owned by Americans. Furthermore, in the interest of goodwill and compassion of course, Americans were allowed to retain the U.S. citizenship while still being nominal subjects of the King of Hawaii. In many ways, the fate of the Hawaiian kingdom was sealed then and there and King Kalakaua died a bewildered man, bitter at his betrayal by the foreigners he had believed were his friends, who had always assured him that their presence and growing influence in the kingdom was for the best and would benefit everyone in the end. It was, of course, not true. They were Americans and not Hawaiians, their first loyalty was to the United States and not the King of Hawaii, their kinship was with those like themselves and not those native to the islands. 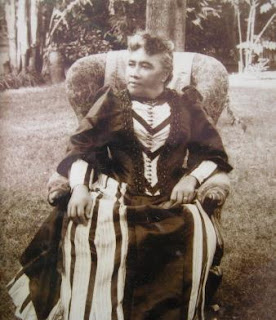 Even today there is a degree of mystery that hangs around how all of this was accomplished. Why had the King only encouraged more foreigners to come to Hawaii when clearly his own people were being displaced in their own country and the American influence grew ever stronger. One shady individual many have questioned was one Elias Rosenberg, who appeared one day and was quickly appointed King Kalakaua's chief adviser and who disappeared only three weeks before the "Bayonet Constitution" was forced on the kingdom. In any event, the King died in 1891, leaving the throne to his sister Queen Liliuokalani. Her reign was not to be a long one. Immediately, she began working on replacing the "Bayonet Constitution" with a new government framework which would restore some of the powers of the monarchy as well as broadening the franchise among the native Hawaiian population. Unfortunately, there were already too many Americans and they had too much power for this attempt to turn back the clock to succeed. The foreign population reacted swiftly and launched a republican coup in 1893 to prevent the Queen from changing the constitution. Sailors and Marines from a nearby U.S. warship intervened to prevent any disorder, naturally siding with their own countrymen. Queen Liliuokalani was deposed and a republic was declared which immediately sought annexation to the United States of America.

In 1895 the Hawaiians attempted a counter-revolution to overthrow the republic and put the Queen back on the throne. Needless to say, this was again too little, too late as the American presence had long become far too large and too powerful to dislodge. The uprising was crushed at its outset and Queen Liliuokalani was arrested and put in prison. However, by the following year, the republic pardoned the Queen and released her, being in full control they had nothing to fear from her being at liberty. The native Hawaiian population had, by then, become too greatly displaced to ever pose a threat to the new American regime. A year later, in 1897, the President of the United States signed the treaty of annexation (thus making Hawaii only the second U.S. state, after Texas, to join the Union by treaty) with the official ceremony being held the following year on August 12. Queen Liliuokalani spent the rest of her life in legal battles with the U.S. government, trying to obtain compensation for her loss, mostly to no avail. She was finally granted a pension of $1,250 a month in 1911 but by that time she did not have long to collect as she died in 1917.

The Hawaiian Royal Family is still around today, the current leader of the family being a former member of the state legislature for the Republican Party, his election being rather unusual for what is possibly the most solidly Democrat Party state in the country. In the 1990's the U.S. government, in the person of President Bill Clinton, did officially apologize for the American takeover of the Kingdom of Hawaii but, of course, that accomplishes nothing and it never means much when someone apologizes for something he or she did not do to people who were themselves not the actual victims. Nothing changed. After many years as a U.S. territory, Hawaii became the 50th state of the Union in 1959. Bad laws can be repealed, mistaken policies can be corrected but demographic changes can never be undone and Hawaii is a perfect example of this hard fact. As of 2010 only 10% of the population has any native Hawaiian or even any Polynesian ancestry at all whereas the majority is of foreign descent, primarily the 39% Asian and 25% European/American with the rest being of mixed ancestry or smaller groups. Many are content with this situation, but many are not, however, they are far too few to have much of an impact on the democratic process. The natives of the Kingdom of Hawaii have proven the truth that, "demography is destiny".
Posted by MadMonarchist at 3:10 AM