The Imperial Roots of Ferragosto

Today is Ferragosto, a holiday unique to Italy (and the Republic of San Marino) today identified with the mid-August vacation period. It is made to coincide with the Feast of the Assumption of the Blessed Virgin Mary, however, it has a much wider significance which includes but is not limited to this particular feast day which is so important to Catholics. The roots of Ferragosto go back to at least the year 18BC though, even then, it built upon an already long established custom of a holiday period in mid August after the local harvest period. However, it became an officially period of celebration to mark the occasion on which Octavian (Julius Caesar's heir and nephew) was given the title of Augustus by the Roman Senate, "Augustus" meaning 'exalted' and used as the official imperial title. In other words, it was on this occasion that Augustus Caesar officially became the first Emperor of Rome. Thus, the already existing post-harvest holiday period was expanded and upgraded to be an official, practically month-long, celebration of the exaltation of the first Roman Emperor. This was known as the Feriae Augusti or the 'festivals of the Emperor Augustus'. 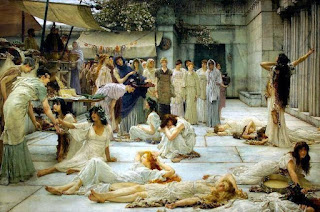 Later, in the Christian period, this came to coincide with the Feast of the Assumption and rather beautifully illustrates the way in which the peoples of Europe did not abandon their own culture and customs with their conversion to Christianity. Rather than ban everything that had pagan roots (which would have meant eradicating practically everything, including democracy which liberals claim to be so fond of), pagan customs were folded into the Christian experience. Obviously, these customs would vary from nation to nation as the Germans or Celts had extremely different customs from those of the Greeks and Romans. It is for this reason that Ferragosto is a uniquely Italian holiday. In time it came to be the start of the vacation period in Italy and this was reinforced by the Kingdom of Italy during the Fascist Era. In an effort to encourage Italians to get out of their small towns and see more of the country, the trains would offer discounts on tickets to enable working class people to take a vacation to famous cities or resort towns. The desire of the regime was to foster greater nationalism and social unity in this way by having the people see more of their own country and to allow people other than the upper class to take vacations too.

It says something about the success of this policy of embracing the whole of European culture and not setting Christianity against it that for quite some time the celebration of Ferragosto was legally mandatory in the Papal States.
Posted by MadMonarchist at 3:04 PM