Hollow Words for the King of Romania 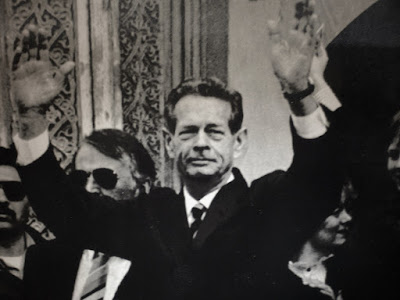 As most will have probably heard by now, HM King Michael I of Romania has been diagnosed with cancer and has, at age 94, decided to retire and hand over his duties as head of the former Romanian Royal Family to his daughter Crown Princess Margarita, who he intends to succeed him. This is, of course, sad but the tributes that came pouring in when this news was made public rubbed me the wrong way. Perhaps it shouldn't but it did, particularly that coming from President Klaus Iohannis. He said that he hoped the former monarch would make it through this difficult time, that he hoped the younger members of the family would carry on his tradition of service to Romanian society and added that, "It is important, especially in these difficult times, not to forget the courage and dedication that the king has shown towards his country since 1927". I'm sorry, but that was, for me, too much to take from such a quarter.

Yes, it is true that King Michael I has given a lifetime of dedication to his country and it is also true that the former monarch has contributed a great deal to Romanian society but if the President really meant what he said, if he truly understood and appreciated that lifetime of dedication and those years of contribution to Romania after the fall of communism (such as lobbying western leaders to admit Romania into NATO) he would not be president at all would he? Where was this appreciation for King Michael I when, certainly since the fall of the Soviet Union, the opportunity arose to give the former monarch his legitimate "job" back? King Michael was, lest we forget, forced to abdicate his throne by the communists with threats of his people being massacred if he refused. He was betrayed, robbed and forced into exile. Post-communist governments may be better than the monstrous regime that deposed him but they continued to uphold their crime of usurping the position of their rightful king. The President singing the praises of the former monarch now, at the end of his life, rings very hollow to me and I find it, frankly, disgusting.

The King, as mentioned, worked for Romania even after he was allowed to return to his own homeland, helping the various governments in areas to which he was particularly able. How did they repay him, by returning a tiny fraction of what had been stolen from him in the first place? They were happy to accept his service but refused to restore him to his proper status. I think it's disgusting that they would praise him now after using him for their own purposes while denying him justice. The King, after all, never sought power but simply hoped to be restored as a constitutional monarch presiding over a representative government. Yet, even that was denied him and those who dismiss 'ceremonial monarchs' would do well to ask themselves why this was. I have less of an issue with the praise given by the Romanian Orthodox Patriarch Daniel who said, "the king is a symbol of the history of the Romanian people and of national dignity" except to say that King Michael could have just as easily been a symbol, not only of history, but the living connection of the historic Romania to the present and future Romania.

Finally, I will simply say that one can blame others all they please (it's a popular pastime these days) but the fact is that the Romanian government is responsible for their own actions and for what goes on in Romania today. Since the fall of the "Iron Curtain" they have had plenty of time to have done right by their former king, he certainly gave them no cause to oppose him, he showed himself ready to serve in any capacity, to help rather than to challenge and they simply chose to take advantage of him, availing themselves of his experience, his contacts and his persona while denying him his very birthright. I think it's disgusting. Rather than all of their hollow words of praise, the only thing I am interested in hearing from any Romanian president is his resignation and the restoration of the Crown and Kingdom of Romania. It should have happened already and I fear, as King Michael fades away, the chances of justice being done will become poorer rather than better.
Posted by MadMonarchist at 2:48 PM