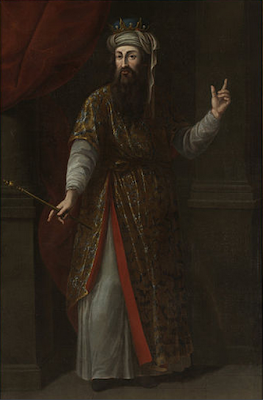 Once upon a time in Europe there was a major Catholic embarrassment known as “the Great Schism”. It came as a result of what is known as “the Babylonian Captivity” or the “Avignon Papacy” when the papal court moved from Rome to Avignon in France which produced a succession of French pontiffs who were seen as little more than the tools of the French Crown. That ended with Pope Gregory XI and when he died the people of Rome were determined to have a Roman pontiff rather than a French one. They were quite forceful about it and so the cardinals elected a rather unpleasant fellow (not exactly a Roman but a southern Italian deemed ‘close enough’) who took the name Pope Urban VI. The French, however, did not like that and so declared his election invalid, the cardinals electing another pope, a warrior-cardinal (Robert of Geneva), who took the name Pope Clement VII. He is what is known as an “Anti-Pope” or an invalid pope. This was the beginning of the “Great Schism” which saw Catholic Europe split into feuding factions, at one point with three different men all claiming to be the “true” Pope at the same time. It was a major embarrassment and it is not surprising that anti-Popes tend to be viewed as ‘bad guys’ in Catholic history.

However, that is not necessarily true. Pope Urban VI, for example, while undoubtedly the valid, legitimate pontiff, was a rather unsavory character and most who had to deal with him found him a rather vindictive, bullying jerk. Pope Clement VII, on the other hand, though nicknamed “the butcher” in his earlier, military career just because of a trifling incident involving the massacre of a few thousand people, was widely considered the much better man, a very nice fellow who treated people well, was forgiving toward his enemies and genuinely considered himself the valid pontiff. Practically any Catholic history will, in fact, relate that while Urban VI was the correct pope, Clement VII would have made a better one. Not every anti-Pope was an ambitious usurper, thirsty for power but rather were sometimes men of sincere piety who, in a confusing and tumultuous time, were prevailed upon to accept the papal crown as a duty to the Church and Christendom. The “Great Schism” was, thankfully, mostly ended with the election of Pope Martin V in 1417, however one rival remained and there would be a couple more before it was all over. The man regarded by history as the last of the anti-Popes is an illustration of a good, devout man being caught up in a situation not of his making which left him on the wrong side of Church history but still with a good reputation. 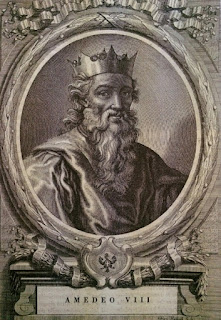 That man was Amadeus VIII, Count and later Duke of Savoy. He was born on September 4, 1383 to Count Amadeus VII of Savoy and Bonne of Berry (granddaughter of King Jean II of France). His father died in 1391 leaving him Count of Savoy at an early age but his mother acted as his regent until he was old enough to rule in his own right. As the Count of Savoy he was quite a successful ruler. He enlarged his domains, oversaw economic prosperity, earned a reputation for being mild-mannered and just as well as being quite religious. With the Hundred Years War still raging between England and France, he tried several times to arrange a negotiated end to the conflict though to no avail. When the “Great Schism” broke out, he was very troubled by it, more so than most because of his pious nature. He had been such a success and had such a great reputation that, in 1416, Sigismund of Luxembourg, the Holy Roman (German) Emperor gave him an aristocratic promotion, raising him to the status of Duke of Savoy. Later, he also conferred on him the title of Count of Geneva. Earlier he had married Mary of Burgundy and had a happy home life, fathering nine children. However, his world fell apart when his beloved wife died in 1422 and Duke Amadeus VIII turned his back on the world.

Amadeus VIII retired, though he retained his title, handing power over to his son Louis, to live a contemplative life as a hermit in Ripaille on the shores of Lake Geneva. He took five knights with him to live by a monastic code he devised as the Order of St Maurice, which, combined with another, is still one of the senior chivalric orders of the Italian Royal Family today. He was thus mostly out of touch from that time on though he had kept up with the events of the Council of Basel-Ferrara-Florence. It was this council, in opposition to Pope Eugene IV, which elected him (Anti-)Pope on October 30, 1439. It was not a position he had sought for himself and it took a period of negotiations before he could be prevailed upon to accept the papal crown. The primary motivation of the electors seems to have been the wealth and prestige they thought Amadeus would bring with him to their cause. He finally accepted and was duly installed as Pope Felix V on November 5, 1439.

Anti-Pope Felix V renounced his secular titles and was crowned by Cardinal d’Allamand in 1440. For the first few years of his pontificate his secretary was Aeneas Sylvinus Piccolomini, later Pope Pius II. The actual pope, Eugene IV, excommunicated him of course and he found no widespread popular support for his position beyond his own lands in Savoy and across Switzerland. Those who did acknowledge him as the rightful pope included the Dukes of Austria, Tyrol, Bavaria-Munich, the Count-Palatine of Simmern, the Teutonic Order and a handful of religious orders and universities in Germany. Most of those who appointed cardinals refused to take their places and as Pope Eugene IV gave way to Pope Nicholas V support for Felix V fell away further. He was also frequently at odds with the Council of Basel over financial matters which is the one area that tends to taint his reputation. Still, no one could find that he had acted in bad faith or could show any evidence of serious defects in his character. His position continued to deteriorate though through 1442 and 1443 after which he increasingly became isolated and ignored. Efforts to establish a papal court and control over the Church bureaucracy ended in frustration and finally the pretense came to an end in 1449 when he submitted to the authority of Pope Nicholas V on April 7. 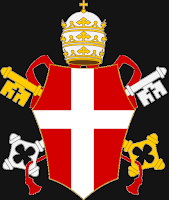 Nonetheless, it was not all that bad an end for anti-Pope Felix V. Because of his good name and recognition that he had been misled rather than acting purposely malicious, Pope Nicholas V was inclined to be forgiving. He appointed Amadeus of Savoy Cardinal of St Sabina and made him his permanent Apostolic vicar-general for the lands of the House of Savoy as well as the dioceses of Basel, Strasbourg, Chur and others. The papal schism had ended and there seemed to be few hard feelings about it, so a happy ending all in all. Amadeus VIII carried on in ecclesiastical office, under the legitimate pontiffs, until his death on January 7, 1451 at the age of 67.
Posted by MadMonarchist at 4:10 PM