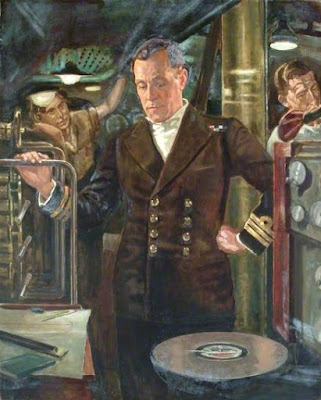 During World War II, or World War I for that matter, most think of the British as being on the receiving end of submarine warfare. It is true that, because of the world wars, Britain has been the target of submarine attacks more than any other country but the Royal Navy quickly proved that they were just as adept at warfare under the waves as they were on the surface and Ben Bryant is a perfect example of the level of excellence achieved by British submariners, which continues on to the present day. He was born on September 16, 1905 in Madras, India, the third child and second son of John Forbes Bryant and Mary Ada. His father worked in the Indian civil service and he spent his earliest years there in what would be the height of the Empire of India. After moving back to Britain, as a boy Bryant went to Oundle School in Northamptonshire and after finishing attended the Royal Naval College at Osborne. Upon graduation he finished his education preparation for an officer in the King’s navy at the Royal Naval College at Dartmouth. He and his two siblings were to do their part for King and Country during World War II, Ben in the Royal Navy, his older brother Joseph in the Royal Army Medical Corps and his sister Mary who lost her husband during the Burma campaign.

In 1929 Ben married Marjorie Dagmar Mynors by whom he had two sons and one daughter (the first son died young) but international events were set to intrude on domestic tranquility. When the Second World War broke out, Bryant was in the thick of it from the start, beginning as a lieutenant commander on the S-class submarine HMS Sealion (72S). He served on the Sealion from September 1938 to October of 1941. In November of 1939, Bryant attacked the German submarine U-21 off the Dogger Bank. It was the second time that the U-21 had been attacked by a British sub and it survived both attempts to sink her. However, the British submariners would in quick order become rather famous for their success at killing submarines with other submarines. In 1940 Bryant scored his first victory with the sinking of a German merchant ship, the August Leonhardt, off the Danish island of Anholt. His next attack on the merchantman Moltkefels missed as was an attack on the German sub U-62 in July. The following month Bryant sunk the Norwegian merchant ship Toran but missed in a subsequent attack on another German merchantman.

In February of 1941 Bryant and the Sealion shelled and sank the Norwegian cargo vessel Hurtigruten and in May attacked the German sub U-74 but, again, was unsuccessful. However, in July, Commander Bryant wreaked havoc on French shipping lanes, taking down four French fishing vessels in quick order. Bryant and his boat were dispatched to hunt the fearsome German battleship Bismarck (along with the bulk of the Royal Navy in the vicinity) but the beast was finished off without his assistance. Not long after, Ben Bryant was promoted to commander and given command of HMS Safari (P211), another S-class boat. This was the command that Ben Bryant is probably most associated with as he and his crew on the Safari wrought havoc on Axis shipping lanes in the Mediterranean. It was a critical operation as British success or failure depended on the struggle against the German and Italian forces in North Africa under Field Marshal Rommel. If they could conquer Egypt, the rest of the Middle East would have been scarcely defensible and the spine of the British Empire would have been severed. In the desert, almost everything depended on logistics and when Rommel and his Axis forces had sufficient supplies, they advanced, when they did not, they retracted. Ben Bryant and his sailors on the Safari made sure Rommel’s troops got as few supplies as possible.

During this outstanding campaign, dodging German and Italian ships, subs and aircraft the entire time, Bryant sank twenty Italian merchant ships, five German transports and six minor Italian warships. Eight other Axis ships were damaged and one Italian submarine was engaged but not sunk. In 1942, showing extreme audacity and skill, Bryant finished off a damaged Italian ship while it was being towed back to port by an Italian destroyer. By the time it was all over, Commander Ben Bryant and his men had done immense damage to Axis shipping lanes and severely hampered Italo-German military operations in North Africa. Were it not for the actions of British submariners like Bryant and others like him, the war in Africa and the outcome of the war entirely might have been very different. For the remainder of the conflict Bryant was given command of a succession of submarine depot ships but he had made a name for himself that would live forever as one of the best wartime sub captains in history. He was the most successful British submarine commander to survive the war. After the death of his wife he remarried in the 1960’s and had a long and distinguished career in the Royal Navy, ultimately achieving the rank of Rear Admiral. His books about submarine warfare are still popular today. 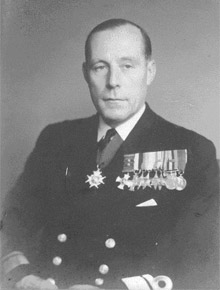 By the time of his death on November 23, 1994 Admiral Ben Bryant had been awarded the Distinguished Service Cross and the Distinguished Service Order with Two Bars and was made a Companion of the Order of the Bath. One of the greatest submariners of all time, he had the qualities of leadership that made him the ideal commander. No better summary could be given than that of one of the men who served under his command, Lt. Commander Edward Young:


“Ben Bryant was one of those men who are big enough to give you confidence in yourself by assuming you can do your job without appearing to check up on you. He believed in taking the game of war seriously; nevertheless it somehow always seemed a game. He strove continuously to make himself and his men as efficient as possible, and was out to hit the enemy with all he knew, but he did so with such an air of gay bravado that half the time you had an odd feeling that you were playing at pirates. With his erect height, his seadog beard and arrogant eye, he was the typical submarine captain of the public imagination. He had a fine command of the English language, which he used to good effect in recounting yarns in the wardroom, inventing ballads, or expressing his opinion of some ineptitude on the part of one of his officers or men. He had the rare gift of being able to switch, without loss of dignity, from commanding officer to entertaining messmate.”

Posted by MadMonarchist at 1:55 AM