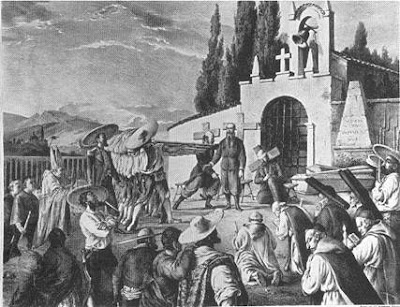 It was on this day in 1867 that HM Emperor Maximilian of Mexico was executed, by firing squad, on orders from President Benito Juarez, and in violation of the republican constitution Juarez himself wrote which forbid the death penalty. He was executed alongside his top generals Miguel Miramon and Tomas Mejia (others were executed elsewhere). From the past Monarch Profile of Maximilian:


Between March and May of 1867 Emperor Maximilian and his army were besieged at Queretaro by a massive republican force. The Emperor displayed his generosity and courage on this occasion, many times exposing himself to danger and often sleeping wrapped in a blanket alongside the frontline soldiers. Finally, he was betrayed by Colonel Miguel Lopez who allowed a republican column to enter the city and the imperial defenses fell apart. Maximilian was given the opportunity to escape but would not abandon his faithful generals who would be killed because of their loyalty to him. After a short military show trial he was sentenced to death with his generals Tomas Mejia and Miguel Miramon. The three men were taken to the ‘Hill of Bells’ and executed by firing squad on June 19, 1867. Maximilian, who was only 34 years old, died shouting “Viva Mexico!” while his generals died shouting, “Viva el Emperador!”

Posted by MadMonarchist at 10:04 AM