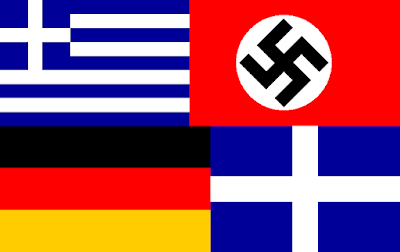 Although it is off-topic for this dusty, little corner of internet, having recently talked about Greece in World War II it seemed relevant to also say a few words about the recent demands by the Greek government for further reparations payments from the Federal Republic of Germany which, so far, the German government has not taken seriously. In my view it is not something the Germans should take seriously and, for once, I suspect most of world opinion is on my side in that. Coming as it does at a time when Greece, having spent itself into ruinous debt by a succession of leftist governments so that no one now regards them as a good credit risk, most see this as a transparent effort to force more money from Germany rather than putting their own fiscal house in order. I should also say that, in my view, most cases of reparations payments have seemed unfair to me as they rarely involve the government which actually committed the crimes in question being the ones forced to pay up. This is certainly the current case in regards to Greece and Germany. That might as well be the first issue to be addressed.

The current Hellenic Republic is demanding reparations from the current Federal Republic of Germany in compensation for crimes committed by the former Nazi State of Germany against the former Kingdom of Greece. In other words, the Greek republic is today demanding payment from a government which has done them no harm. Putting aside the issue of the governments involved, only a very few (and ever shrinking) number of people alive in Greece today ever suffered from German occupation just as very few Germans are alive today who were anything more than innocent children at the time of the invasion and occupation of Greece. There is no obvious justification then for the German people of today being expected to pay for wrongs which were committed by their grandparents or great-grandparents to a Greek population which has, for the most part, been born long after such wrongs were committed. That the Greek people suffered under the German occupation is not in question nor is it doubted that many Greek people are still suffering today but those Greeks who are suffering today have only their own governments and, more often than not, their own electoral choices to blame for that.

Secondly, the selective nature of this demand for reparations makes it appear to be more an attempt at moral blackmail than a genuine quest for just compensation. As was mentioned in the previous article on Greece in World War II, most of the country, for most of the war, was under Italian occupation and the acts of cruelty committed by the Italians against the Greeks were few and far between. Additionally, part of Greece was also occupied by the Bulgarians and there were many acts of cruelty meted out to the Greeks in that zone of occupation. However, we only see the current Greek government demanding reparations from Germany and not from the Italians or Bulgarians; perhaps because neither of these countries have the money to give that the Germans do? There were also numerous acts of barbarism committed against the Greeks by the Greeks themselves during the war and in the civil war that grew out of it. These were invariably committed by revolutionary organizations, many of them communists, whose acts of resistance were what often prompted the reprisals by German forces for which the Greeks are now demanding reparations.

That brings me to the third point which is that one of the complicating matters in terms of war-time guilt in cases like this is the role played by collaborators. This was also the case in Greece where republican General George Tsolakoglou declared the monarchy abolished and set up the “Hellenic State” which collaborated with the Axis powers occupying the country. He was followed by two other collaborationist leaders, the last of which did not collaborate as much as the Germans were soon forced out of the country. It was this government which paid the so-called “war loan” to Nazi Germany for which the legitimate Greek government later demanded reparations. It was also this collaborationist government which helped the Germans in requisitioning supplies from the already hard-pressed Greek population which resulted in the “Great Famine” in the winter of 1941-42 that cost about hundreds of thousands of Greek lives. Their suffering was immense but some Greeks were complicit in that suffering along with the Nazis and the ring-leaders did not face all that harsh of a punishment. Tsolakoglou was convicted of treason but never executed, he died of disease three years after the war still in prison and his successor fled the country to Nazi Germany, was arrested by the Americans who handed him over to the Greeks who first sentenced him to death but then reduced that to life in prison and then reduced that. He was released in 1951 and died peacefully at home a decade later.

Does this seem like justice? It was certainly a far less harsh fate than befell Hitler, Mussolini or Tojo. For the record, the actions of collaborators does not, in my view, negate the suffering of other people, the vast majority of whom opposed the occupation forces whether they actively resisted or not. However, I do think that it should lessen the “victim-hood” status of such countries where there was widespread collaboration with the side later deemed to have been the guilty party. There are other examples of this, in fact far more troublesome than that of Greece I would say. In France, for example, the level of collaboration with the Nazi regime was far more extensive than most realize and was something that the post-war French government of Charles DeGaulle tried very hard to hush up and forget about in favor of a new narrative of unrelenting resistance to the Nazis to help rebuild French national pride. However, certainly the most egregious example must be that of the Indonesian dictator Sukarno who extracted a huge amount of reparations from a defeated Japan even though he himself had been a Japanese collaborator during the war. In short, he demanded and received compensation for crimes committed by the Japanese occupation forces in his country which he himself helped them to commit!

This latest Greek demand for compensation is also a case of double-dipping and hypocrisy. Although, again, the current Greek government is certainly not alone in trying to run this scam, using guilt to try to coerce a country to pay more than once for wrongs committed in the past. In 1960 West Germany paid the Greek government 115 million D-Marks in compensation for the crimes committed by the Nazis in Greece during the war. The Greek government has since claimed that this was not supposed to be the final amount but in 1990, prior to re-unification, East and West Germany signed another agreement with the Americans, British, French and Russians in which these countries renounced all rights held in Germany, allowing for reunification and for Germany to become a united country with the same rights and obligations as any other. It was supposed to be a return to normalcy and an end to the World War II punishments against Germany.

Keeping that in mind, when the Greek government recently demanded a whopping $303 billion from the Federal Republic of Germany in war reparations, the Germans pointed to the aforementioned agreement with the U.S., U.K., France and Russia which was called the “Treaty on the FINAL Settlement with Respect to Germany” (my emphasis) and that this had concluded all such matters and further reparations would not be discussed. The Greeks objected to this on the grounds that they had not been party to any such agreement. The Germans responded to that objection with the simple statement of fact that Greek involvement was irrelevant as Germany had surrendered to the Americans, British, French and Russians -not to the Greeks. Therefore, these were the only powers that Germany had to deal with in regards to what happened during the war. This is where the hypocrisy part comes in and, under the circumstances, it is rather funny.

The German response to this objection, by Greece, was that it was irrelevant as Germany had not been beaten by the Greeks and had not surrendered to the Greeks but was beaten by the Americans, British and Russians and so had surrendered to them. What is comic about this answer, and why the Greeks have nothing to say about it, is that this was exactly what the Greeks themselves had said in World War II. To over-simplify for the sake of brevity; while the Greeks were fighting the Italians at the front door the Germans had come in by the back door and taken them from behind. When the Greeks surrendered they were very adamant and very dramatic about specifically surrendering to the Germans and not the Italians who they said had not beaten them. As a result, Germany controlled the process and Italy was unable to annex any of the territory Mussolini had wanted for the Third Roman Empire. Thus, perhaps unwittingly, the German republic had caught the Greeks in a technicality of their own making by pointing out that Nazi Germany had not surrendered to Greece and thus had no need of satisfying Greek demands.

Finally, it is extremely doubtful that the Greeks will receive any of these new reparations that they are demanding. The German government has said it is a settled subject and if they do give the Greeks any money it will be because they choose to and not because they believe Greece is legitimately entitled to it. Almost everyone that I have talked to about this subject immediately came to the same conclusion, that this was simply a dishonest way of trying to force more money from the German bank that would loan them no more. It is a ridiculous proposition and the Greek politicians who came up with it have only hurt the image of their country on the world stage by putting it forward.
Posted by MadMonarchist at 12:15 AM