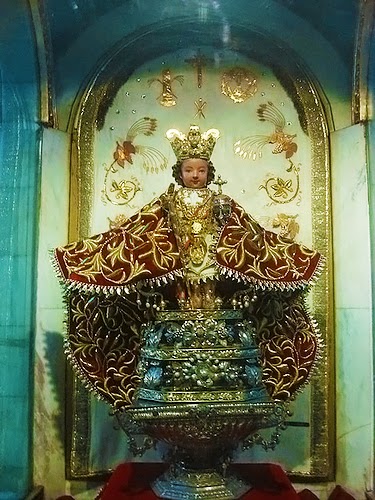 The monarchist legacy in the Philippines can be a tricky subject. However, one area in which the Spanish colonial legacy is not controversial is in the area of religion with the Philippines standing out as the most devoutly Catholic country in all of Asia. Within that spectrum, one of the most beloved local focuses for religious devotion is the 'Holy Child of Cebu'. It is the oldest Christian icon in the Philippines and its origins in the islands have monarchist origins. It was brought by the Portuguese explorer (in the employ of Spain) Ferdinand Magellan and given as a gift to the Raja of Cebu, Humabon, as a gift to mark his baptism into the Catholic faith. Incidentally, the gift was presented along with another icon, a statue of Our Lady of the Remedies which later became a very specifically royalist icon in Mexico. Over the centuries, the Holy Child icon was embellished with fine cloth and the regalia of a Christian emperor.

Eventually, as this particular devotion grew and grew in popularity, it achieved the farthest heights of official recognition. Pope Innocent XIII approved of special liturgical texts for the celebration of the 'Holy Child of the Philippines'. Centuries later, both Pope Paul VI and Pope St John Paul II gave the devotion special recognition. In 1965 Pope Paul VI empowered his legate to hold a pontifical high mass and a canonical coronation for the image, which is a rare honor indeed. The only other Christ images to be so crowned have been the Holy Infant of Prague in what is now the Czech Republic and the Holy Child of Aracoeli in Italy (which was stolen in 1994).

During the colonial era, the Holy Child of Cebu was named Captain-General of the Spanish forces of the Philippines, which was marked by the addition of military garb in the form of boots and a red sash. In 2011 the modern Filipino navy named the Holy Child the "Lord Admiral of the Seas" on the anniversary of the rediscovery of the image (it had been lost for some time following its original presentation to the raja until the establishment of Spanish rule). Probably the most beloved and widely revered icon in the Philippines, it is the focus of a special liturgical feast every third Sunday of January.
Posted by MadMonarchist at 7:38 AM