The Monarchy of Luxembourg in World War II 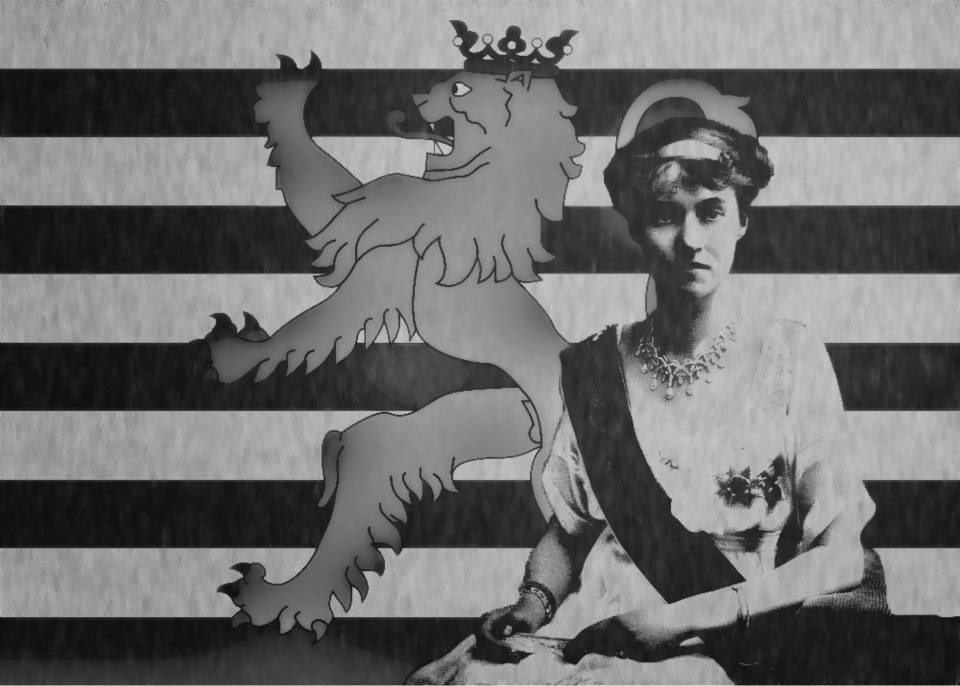 The memory of World War I hung heavily over the grand ducal family of Luxembourg in the build-up to World War II. Grand Duchess Marie Adelaide had, quite unjustly, been criticized heavily for her conduct during the occupation of Luxembourg by the forces of the German Empire and in the aftermath had been forced to abdicate in favor of her younger sister who became the Grand Duchess Charlotte in 1919. There had been a real possibility of Luxembourg abolishing the monarchy and becoming a republic or even being annexed to Belgium or France. The French had encouraged the view that the monarchy had collaborated with the Germans and it cost the pious and lovely Marie Adelaide her throne. The monarchy was maintained but Grand Duchess Charlotte had to take steps to sever all ties with the hated Germans, selling off all family property in Germany to the state of Prussia in 1935. Care was also taken that, if the Germans ever invaded again, the Grand Duchess would not remain in the country but would go into exile and place all hopes for the future in the success of the Allied armies.

When war began over the German invasion of Poland, a repeat of the events of the summer of 1914 seemed possible and in 1940 Luxembourg attempted to fortify itself. This was the creation of the “Schuster Line” which was not actually a fortified line but rather a series of concrete barricades set up on the main roads in and out of the tiny country with heavy steel gates that could be shut in the event of an attack. The idea was to slow any invader and give time for other countries, such as the French, to arrive to actually defend Luxembourg in fulfillment of the obligations of the treaty guaranteeing Luxembourg neutrality. However, because of that same treaty, Luxembourg was obliged to build such barriers along the French as well as German borders so as to remain strictly neutral. In truth, the “Schuster Line” was hardly a formidable obstacle and really served mostly as a sugar pill to give the public the impression that their country could be defended. Actually, there was no way these roadblocks would slow a German advance in any meaningful way and little hope that the French could arrive in time to actually stop an invasion.

That invasion came on May 10, 1940 and the small Luxembourg Volunteer Corps (essentially what amounted to one battalion of militia) was ordered to stay in its barracks. The Germans moved in and occupied the country in a day with little to no resistance. In fact, most of the opposition they faced came from Luxembourg policemen, six of whom were wounded compared to only one Luxembourgish soldier. No one was killed. Elements of the French army did make contact with the Germans in Luxembourg but was little more than an armed reconnaissance and quickly fell back behind the Maginot Line on the French border. Grand Duchess Charlotte and the rest of the Royal Family had already left the country. When the first German units had violated Luxembourgish territory the day before, the Grand Duchess had summoned her ministers and all agreed to place the fate of their country totally in the hands of France. This had to be done as, since the changes following World War I, the Grand Duchess had less power than her predecessors. Remembering what had happened to her sister, there was no thought to staying in the country.

Of course, France itself crumbled rapidly in the face of the German blitzkrieg. After six weeks of confused fighting the French were defeated and the British had abandoned the continent. Grand Duchess Charlotte was advised, toward the end, by the French government that they could not vouch for her safety and so she, her family and her ministers all fled through Spain to Portugal and from there took ship to England where they established a government-in-exile. For their part, the Germans seemed unsure as to whether this was a good thing or a bad thing. Once the Nazi grip on France and the Low Countries was secure, the Germans sent a message to Grand Duchess Charlotte offering to restore her to the throne in Luxembourg though of course German military necessity would mean that the country would remain occupied and subject to Germany for the duration of the war. Needless to say, Grand Duchess Charlotte was not about to accept such an offer and quickly refused and used the BBC to broadcast to the people of Luxembourg to encourage them to persevere until the day of liberation. In response, Luxembourg was the one Low Country that the Germans took a firm position on, erasing the Grand Duchy from the map by annexing it directly to the “German Reich”.

This action made it clear that the life or death of Luxembourg and the Luxembourgish monarchy would depend entirely on the success or failure of the Allied war effort. To her credit, Grand Duchess Charlotte did everything in her power to support that effort. Her husband, Prince Felix of Bourbon-Parma, was a veteran of the Austrian army in World War I and had served as Inspector-General of the Luxembourg Volunteer Corps. However, after being forced into exile he took charge of their children (six in all) and took them to the safety of the United States where they settled on Long Island in New York. The estate they lived on belonged to a family friend who had previously been the American ambassador to Belgium and Luxembourg. Grand Duchess Charlotte rejoined her family in Montreal, Canada (where the children were sent to school) but never had much time for her private life due to the war. She traveled across the United States to encourage the American public to support the Allied war effort and to donate to help the Allies. President Roosevelt fully supported this as he wanted to get involved in the war but did not want to oppose the isolationist majority of the American people who, after a bad experience in World War I, wanted to stay out of “Europe’s wars”.

The Grand Duchess met with President Roosevelt several times and was one of a number of exiled European royals that FDR hosted and cooperated with to try to influence the American people toward joining the Allies (eventually, Japan solved this problem for him). Grand Duchess Charlotte also had to frequently return to London and her government-in-exile in spite of the fact that German planes and submarines made any crossing of the Atlantic very risky. When the United States did finally join the war in December of 1941 hopes for the liberation of Luxembourg and restoration of the monarchy were revived. At that moment, it seemed that victory was no longer a question of “if” but rather “when”. Grand Duchess Charlotte continued her broadcasts to her people, becoming a symbol for the underground resistance and Luxembourg contributed as much as it could to the Allied war effort. In 1942 Prince Jean (future Grand Duke) volunteered for the British army and served in the Irish Guards, eventually rising to the rank of captain in 1944.

When the moment for the Allied invasion of France came, though necessarily small, the occupied Grand Duchy of Luxembourg was still represented. About seventy Luxembourgish volunteers were attached to the Artillery Group of the First Belgian Infantry Brigade, eventually under their own officers trained in Britain. Each of their guns were named after the children of the Royal Family. This Luxembourgish battery of artillery was transferred to France in August of 1944, serving in the wider Battle of Normandy. Prince Jean had already come ashore on D-Day and served in the Battle of Caen, later participating in the liberation of Brussels. As the Allies moved in the resistance in Luxembourg rose up and began to engage the Germans such as at the Battle of Vianden Castle where 30 resistance fighters, armed by the United States, successfully held off an attack by 250 soldiers of the Waffen-SS. On September 10, 1944 Allied forces, including Prince Jean, liberated Luxembourg City. Damian Kratzenberg, leader of the pro-Nazi collaborators was arrested and, after the war, executed. However, the Germans returned and re-took much of the country in the Ardennes Offensive (aka The Battle of the Bulge”) which took a heavy toll on the local population. In the end, the Allies fought their way back and expelled the Germans from Luxembourg soil for good.

The Grand Duchy was restored to independence and, in the moment of the greatest public celebration, the monarchy was restored as well with the triumphant return of Grand Duchess Charlotte. All in all, the monarchy of Luxembourg emerged probably better off than those of Belgium or The Netherlands. Britain, America and Russia nixed plans to annex parts of Germany to Luxembourg but the monarchy had never been more popular and the status of the tiny country rose to new heights. The military was strengthened, Luxembourg became a member of NATO, participating in operations around the world, ties with foreign countries were established or strengthened and Luxembourgish forces were even given occupation duties in the French zone of West Germany. Before the war, few outside of Europe and even heard of Luxembourg but afterwards the little Grand Duchy would become much more well known with defense, economic and diplomatic ties to countries all over the world.

Luxembourg and its monarchy had suffered greatly. Some 500 people were killed in the Battle of the Bulge alone, tens of thousands were made homeless and the 3,500 Jews in the country were wiped out. About 5,700 people of Luxembourg died in the war, about 2% of the population and not a few had been forcibly conscripted into the German military after the Nazis annexed the country. The Grand Duchess’ sister, Crown Princess Antonia of Bavaria, was arrested by the Nazis in Hungary and sent to a concentration camp where she was tortured but, thankfully, she survived the ordeal but her health was never the same and she died nine years later in Switzerland, having vowed never to set foot in Germany again. It was a long, painful ordeal but Luxembourg had emerged stronger than before, more united around the monarchy and a more confident member of the community of nations. Today, the Luxembourgish monarchy is one of the most secure and popular in the world.
Posted by MadMonarchist at 2:29 PM